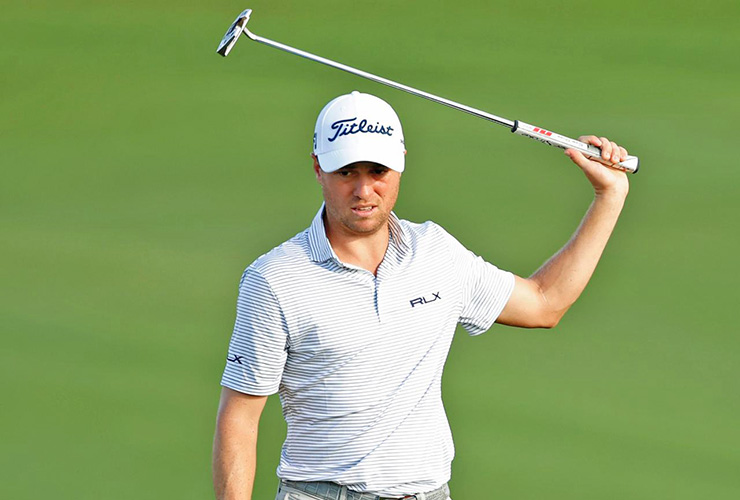 Justin Thomas reacts on the 18th green during the third round of the Sentry Tournament of Champions. Cliff Hawkins

By Brian Wacker
Justin Thomas used a homophobic slur during the third round of the Sentry Tournament of Champions on Saturday, and he apologized afterward.

“I screwed up,” Thomas told Golf Digest. “I have to be better. I will be better. I deeply apologize to everybody and anybody who was offended.”

The incident occurred after Thomas missed a six-foot par putt on the fourth hole. After his ball slid by the cup, a greenside microphone picked him up uttering the slur to himself. It could be heard on Golf Channel’s telecast.

Thomas then tapped in for bogey.

After his round, Thomas said he was unaware that he’d said it, given the heat of the moment, but added that was not an excuse.

“It’s embarrassing; that’s not me and it’s inexcusable,”he said “There’s no excuse. I’m an adult and there’s no place for that. It doesn’t matter who you are, no one’s above that. I have no excuse.”

The PGA Tour issued the following statement to Golf Digest: “As he expressed after his round, we agree that Justin’s comment was unacceptable.”

At Maui, a greenside microphone picked up Thomas’ comment. Players wearing microphones has long been a topic of conversation between the tour and the networks that carry its events. Some players have been open to the idea and worn them during select tournaments. Thomas made it clear in 2020, however, that he would be opposed to the idea.

Though many players have cursed after a poor shot or missed putt, Thomas’ word choice was different. He is also the latest golfer to find himself under scrutiny after using a homophobic slur.

In March of last year, Scott Piercy used an anti-gay slur in an Instagram post directed at former South Bend mayor and 2020 Democratic presidential nominee Pete Buttigieg that also included a reference to a right-wing conspiracy theory. He apologized, but all five of his sponsors, including Titleist, FootJoy and J. Lindeberg, dropped him. And in 2014, Patrick Reed used a slur after a three-putt during the WGC-HSBC Champions in China.

What, if any, discipline awaits Thomas is unknown, though it’s likely he would face at least a fine. The PGA Tour does not comment on disciplinary action.

Thomas shot a five-under 68 on Saturday and is tied for fifth, four strokes off the lead.