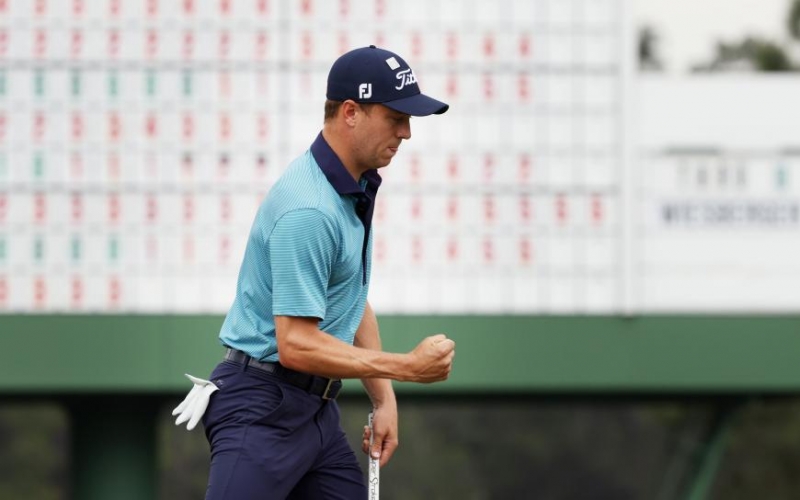 Kevin C. Cox
Justin Thomas reacts to his par on the 17th green during the second round of the Masters.

By Brian Wacker
Amen? More like hallelujah for Justin Thomas.

Birdies across the most famous three-hole stretch in golf Friday at the Masters will go down as the highlight of the 27-year-old’s second round—particularly the 9-iron that he cut toward the flag in the center 12th green, the ball stopping pin-high and eight feet left of the hole. The others were pretty spectacular, too—a center-cup 20-footer on the 11th and a second shot into the 13th that was so nasty that he let out a snarl reminiscent of his idol, the late Kobe Bryant, while the ball was still in the air. When it landed, it settled 12 feet from the hole, setting up an eagle try. The putt slid by and that perturbed him.

So did a sloppy, three-putt bogey on the 18th, but only in the moment. It was the lone blemish in an otherwise highlight-reel performance. Thomas finished with a five-under 67 that has him near the top of the leader board. More importantly, he is back to playing the type of golf that won him 14 titles to date, including a major, and at one time elevated him to best player in the world status.

“I played great today,” he said. “I drove the ball a lot better, hit a lot more quality iron shots, had some great up and downs. It was easy. For as tough as this place has been playing, I felt like it was as easy as it could have been, other than the putt that I made on 11, a lot of my birdies have been pretty low stress.”

The same could be said of things away from the golf course for Thomas.

First, a live mic caught him uttering a homophobic slur after a missed putt during the third round of the Sentry Tournament of Champions in Hawaii in January. Thomas apologized profusely, but the incident continued to follow him, from one interview to the next. A longtime clothing sponsor soon dumped him, yet the stain of the mistake remained, no matter how contrite he was.

Then, on the eve of the final round of the Waste Management Phoenix Open a few weeks later, Thomas leaned that his grandfather, Paul, the patriarch of the golfing family, had passed away. Dealing with controversy and loss for the first time in his life, he found himself in a spiral, admitting that he was waking up on the wrong side of the bed every day.

But some encouraging words from Tiger Woods—he’s certainly seen and overcome his share of both in his 45 years—soon resonated with Woods telling Thomas that he was a grown man and needed to go figure it out. He did, and in short order, winning last month’s Players Championship with some of the best ball-striking of his career.

This year at Augusta things got off to a bumpy start, with Thomas playing his first seven holes in three over. Among the bogeys was one on the second, where he pulled his tee shot into the hazard and eventually two-putted for bogey, a cardinal sin on the par 5. Things started to click soon after, though, beginning with a dart on the 10th to set up a five-footer for birdie and then another to three feet on the 16th.

Friday, Thomas was even better, beginning with a curling 10-footer for birdie on the first. Then came a whirling long iron from 246 yards out of the rough to the front of the green on 8, setting up an easy up-and-down for another birdie. After that came the barrage through 11, 12 and 13, followed by another birdie on the par-5 15th, where Thomas smoothly two-putted from 40 feet.

It didn’t hurt to be playing alongside Tony Finau, who racked up five birdies of his own along with an eagle en route to a 66. “It’s definitely better than when the group mo is low,” Thomas said. “He was making it look very easy as well.”

Finally, JT is again, too.