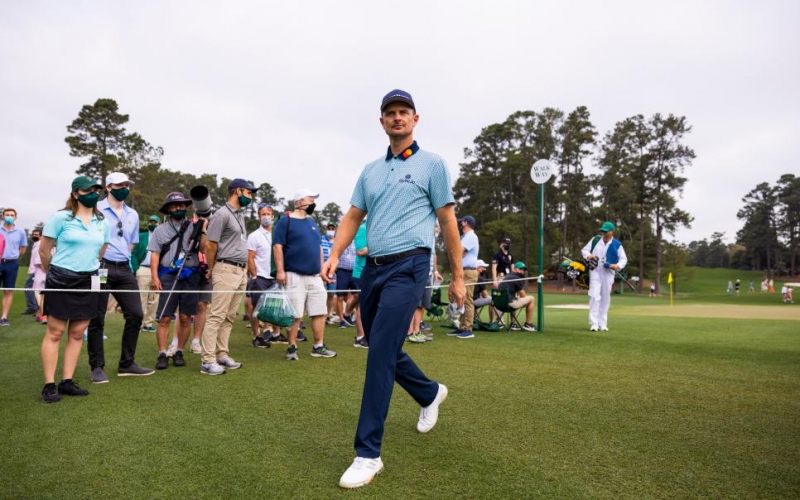 By Alex Myers
AUGUSTA, Ga. — As Justin Rose made his way from the 18th green, an Augusta National member pumped his fist and yelled, “Way to come back!” Rose, seeing the familiar face, gave a thumbs up. He could now flash a big smile.

And take an even bigger sigh of relief.

Rose could end Friday as he started it—with the lead at the 2021 Masters. But for much of his round, it didn’t look like that would be the case.

The man who fired a brilliant opening 65 on Thursday found the right trees with his opening shot on Friday and had to punch out sideways. He then dropped out of the lead with ensuing bogeys on holes 4, 6 and 7 to make the turn in 39. His four-shot cushion was completely gone.

“I was joking, the finger was heading towards the panic button a little bit,” Rose said. “I had a little talk with myself on 8 and said you’re still leading the Masters, and I just changed my mindset a little bit and started to play match play against the golf course. I scratched a line on my scorecard and told myself I was three down and could I go ahead and beat the golf course from that point on. I had a putt on 18 to win my match 1-up, but unfortunately, it just slipped by. But an honourable draw.”

That “draw” translated to an even-par 72 that kept Rose at seven-under through 36 holes. His finish wasn’t as spectacular as that Thursday 11-hole stretch in which he shot nine-under, but a bogey-free 33 on the back nine could turn out to be just as important.

The results—at least, so far—are even more impressive when you consider Rose entered this week having not played competitively in a month. But the Brit’s great track record at Augusta National is overriding any lack of sharpness in form.

“I would have been slightly surprised, but nothing does surprise me here in the sense of I know that this place inspires me,” Rose said of the position he’s in. “I love being here on the grounds. It’s a golf course I know how to play better than any other. For me to come into any major championship without playing for a month, it would be this one.”

So what’s on tap tonight as he prepares to tee off with the lead on Saturday in search of a green jacket to go with that Olympic gold medal in 2016 and a U.S. Open title in 2013? Not much. No Netflix and chill. Not even a little Masters and chill. Just … chill.

“My wife’s here and we’re pretty low-key in the house, actually,” Rose said. “We have a nice little fire pit that we sit out in the evening and just chat and chill. And not too much of the TV, I guess, is kind of the only way to stay away from it.”

Not a bad idea. He’ll be right in the thick of it again come Saturday afternoon.

The funny part is it’s not even surprising anymore.