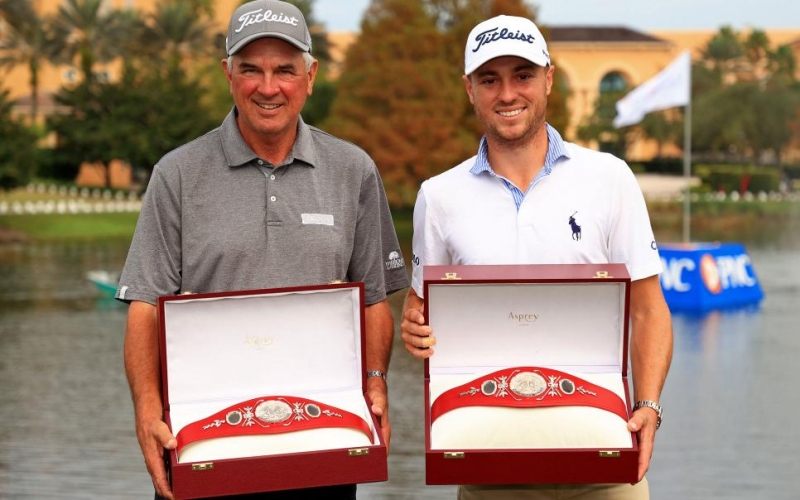 Mike Ehrmann
Mike Thomas and his son, Justin, pose with their championship belts after winning the PNC Championship on Sunday.

By Ryan Herrington
For every tournament his son has won as a competitive golfer since grade school, Mike Thomas has a golf ball from the event on display back at Harmony Landing Country Club in Goshen, Ky., where he’s worked since 1990 as the head professional. The question after Sunday’s victory at the PNC Championship: Does Mike put a second ball up to commemorate his part in the latest victory?

The father-and-son combo walked away with the title at the Ritz-Carlton Golf Club in Orlando, thanks to a closing 15-under 57 in the two-person two-day scramble event. Their 25-under 119 total was one better than Vijay and Qass Singh.

Tiger and Charlie Woods were the most well-known first-time duo competing in the event (they’d finish in seventh place, five shots off the pace), but the Thomases became the fifth pair to win in their debut in the tournament and the first since Angel Cabrera and his son won in 2017.

The other bit of history Justin and Mike set? This was the first time in the event’s 23-year history where the father on the winning team was playing as the partner.

Team Thomas birdied their first seven holes on Sunday to jump to the lead. Hoping to post a number that would hold as other teams came in, Mike Thomas rolled in a five-footer for birdie on the 18th hole that would prove to be the clincher, earning them a $200,000 payday in the process. 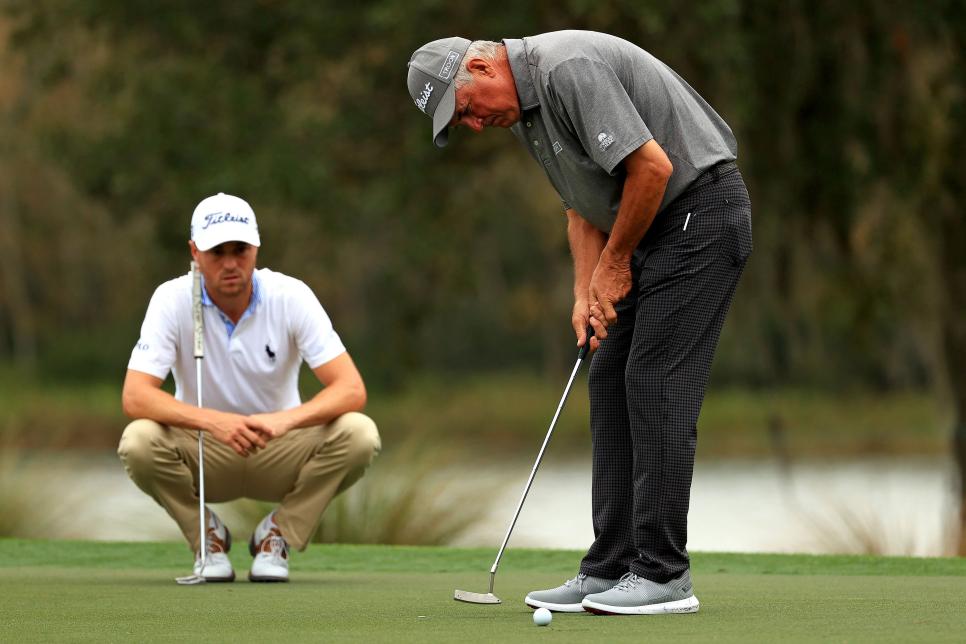 Mike Ehrmann
Mike Thomas putts on the 15th hole with his son, Justin, watching during the final round of the PNC Championship.

“A part of you didn’t care who won,” said Justin, whose mother, Jani, also got in on the action, caddying for Mike. “We were here as father and son to enjoy a special moment.”

That said, Justin Thomas is a competitive sort, with 13 PGA Tour wins at just age 27. And that golf ball rack back in Kentucky has more than a hundred balls in it. Something, however, makes you believe the golf ball from Sunday will have a special place back in the pro shop.