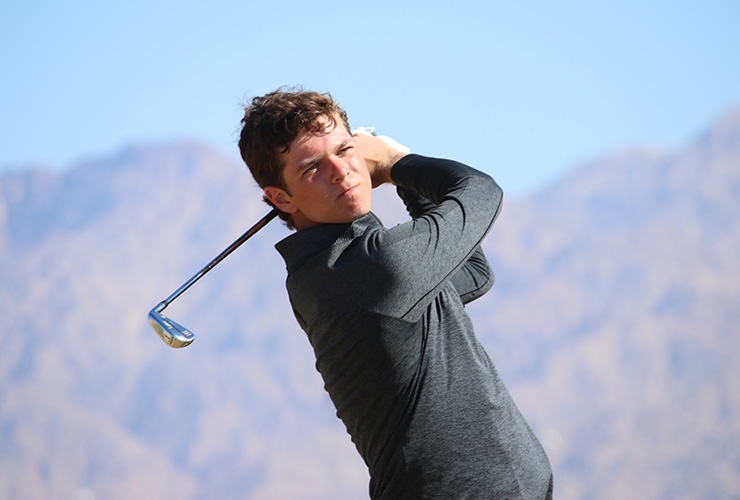 By Kent Gray
While most of us can’t wait to say ma’asalama and good riddance to 2020, Shergo Al Kurdi will be one of those who look back on the year that shook the world with genuine fondness.

In a last-gasp boost, the Jordanian teen learned on New Year’s eve that he will tee it up in the OMEGA Dubai Desert Classic from Jan. 28 courtesy of leading the MENA Tour’s stalled 2020 amateur Order of Merit (OOM).

It is understood the 16-year-old is the first Middle Eastern player to earn a spot – others have been handed invites – into the $3.25 million European Tour event at Emirates Golf Club.

It comes after MENA Tour commissioner David Spencer sent a letter to the regional developmental circuit’s information-hungry membership outlining plans for a full 11-event schedule in 2021 – after the five events postponed by COVID-19 earlier this year are played in a month-long “golf bubble” at Ayla Golf Club in Aqaba – Al Kurdi’s home club – from March 8.

Al Kurdi will be joined at the “Major of the Middle East” by Englishmen David Langley and David Hague and Scot Ryan Lumsden, the top three players on the professional OOM before the MENA Tour was put in ice following the Journey to Jordan #2 Championship, won by Lumsden, in early March.

It’s been a year of firsts for Al Kurdi who became the first Arab male to earn Official World Golf Ranking points when he finished runner-up to Englishman David Langley at the Journey to Jordan 1 in February.  He’ll end 2020 as the world No. 1506; he is ranked No.1053 in the World Amateur Golf Ranking.

The ODDC will be Al Kurdi’s fifth European Tour start; he also teed it up in the Jordan Mixed Ope, an event co-sanctioned the Challenge Tour, Staysure (Now Legends Tour) and Ladies European Tour, in April 2019.

As you’d expect, it’s a been an invaluable learning curve for the teen who first teed it up in the Qatar Masters in 2018, played the inaugural Saudi International and Trophee Hassan II in Morocco last year before returning to Doha for the Qatar Masters in March, the final event before COVID-19 shutdown the European Tour. He’s missed the cut in all five European/Challenge Tour starts but showed his progression at Education City Golf Club in March with rounds of 73-74.

Al Kurdi is no stranger to the Majlis course at Emirates G.C. He started playing MENA Tour events at the age of just 13 and was invited by then ODDC Tournament Director Spencer to play the Pro-Am at Emirates G.C. in 2014, as captured in the picture above.

Qualifying for the event proper is a continuation of the MENA Tour’s remit to see an Arab player qualify for the Olympic Games.

“We are so proud of Shergo and what he has managed to achieve at such a young age,” Spencer said in February after Al Kurdi joined the OWGR in February.

“The MENA Tour by Arena was established with this specific objective in mind and we feel validated of all the work that has been put behind the Tour. Having a player from the region qualify for the Olympics is our cherished objective, and Shergo is now well on his way.”