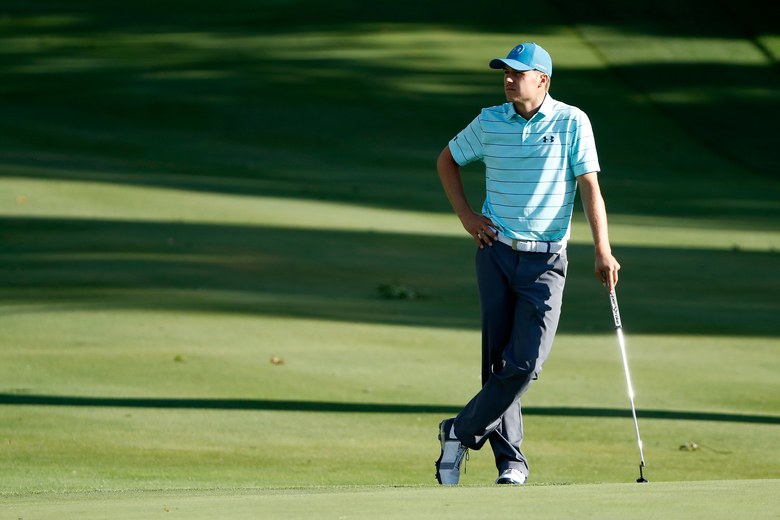 By Alex Myers
The modern career Grand Slam in men’s golf is something that has only been achieved by five golfers: Gene Sarazen, Ben Hogan, Gary Player, Jack Nicklaus and Tiger Woods. If you didn’t know this by now, you certainly will have it memorized within 30 minutes of watching this year’s PGA Championship. That’s because most all of the attention will be on Jordan Spieth as he attempts to become the youngest player to join this elite group. How does Spieth’s pursuit of history compare with those who came before him? Here’s a look back at the five who did it — and the five others who came close, but never (“haven’t” in the case of one) quite got there.

Gene Sarazen
Major titles: 7 — PGA Championship (3), U.S. Open (2), Masters (1), British Open (1)
Attempts needed to complete Grand Slam: 2
The Squire’s “shot heard ‘round the world” at the 1935 Masters – an albatross on the 15th hole during the final round – also made him the first player to complete the modern Grand Slam. He nearly did it as quickly as possible considering the inaugural Masters was played just the year before. Not that he realized what he had done. The concept of a modern Grand Slam has been traced to Arnold Palmer trying to win the Masters, U.S. Open, British Open and PGA Championship the same year after he began 1960 with wins at the Masters and U.S. Open. So really, all the players on these lists who came before Palmer didn’t have the added pressure of knowing they were trying to complete the modern career Grand Slam.

Ben Hogan
Major titles: 9 – U.S. Open (4), Masters (2), PGA Championship (2), British Open (1)
Attempts needed to complete Grand Slam: 1
Hogan won at Carnoustie in 1953, which was his only trip to the British Open. The victory was part of a historic campaign in which he also won the Masters and U.S. Open. Hogan might have just won the entire Grand Slam in one year, but that year’s British Open overlapped with the PGA Championship. Tiger Woods is the only other male golfer to win three modern majors in the same season.

Gary Player
Major titles: 9 – Masters (3), British Open (3), PGA Championship (2), U.S. Open (1)
Attempts needed to complete Grand Slam: 3
Player completed the slam at 29 by winning an 18-hole playoff over Kel Nagle at Bellerive Country Club. The South African, who remains the only international golfer to pull off the feat, would win five more majors, but this was his final U.S. Open title.

Tiger Woods
Major titles: 14 – Masters (4), PGA Championship (4), U.S. Open (3), British Open (3)
Attempts needed to complete Grand Slam: 1
Woods completed the career slam during his legendary 2000 campaign with an eight-shot victory at St. Andrews. He would also win that year’s PGA Championship and the 2001 Masters to make him the only player to hold all four major trophies at the same time. Although Tiger didn’t technically pull off the calendar slam, the feat was dubbed the “Tiger Slam.” 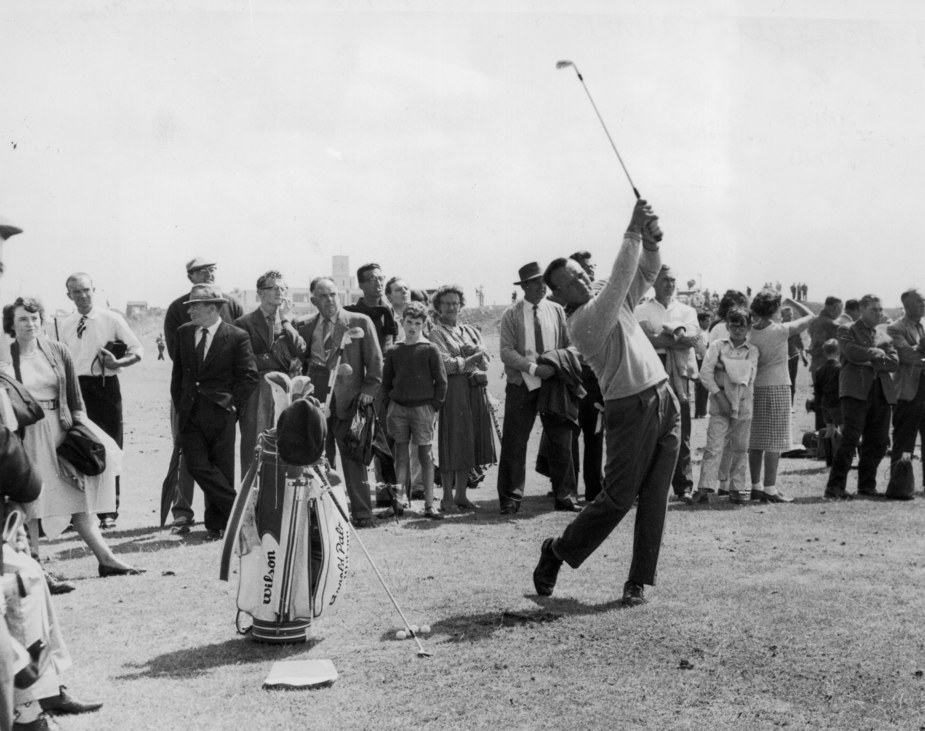 (Note: We’re not counting Walter Hagen, who racked up 11 majors — 5 PGAs, 4 British Opens and 2 U.S. Opens — but never won the Masters, because he was well past his prime when the Masters was founded in 1934. And of course, Masters co-founder Bobby Jones, who won what were considered the four biggest golf tournaments at the time — the original Grand Slam of the U.S. Open, U.S. Amateur, British Amateur and British Open — in 1930, doesn’t make either of these lists at no fault of his own. When Jones retired, he had 13 major titles on his resume, but now he’s only credited with seven. Again, we’re talking about the modern Grand Slam.)

Tom Watson
Major titles: 8 – British Open (5), Masters (2), U.S. Open (1)
Attempts to complete Grand Slam: 24
Closest call(s): T-2 at 1978 PGA Championship
Four years before his lone U.S. Open win is when Watson actually had his best shot at winning the PGA, so he wasn’t in position to complete the slam yet. However, that doesn’t make what happened any less painful as Watson blew a five-shot lead after 54 holes and lost in a playoff to John Mahaffey. Of his 24 attempts at the PGA after winning his third major, his best finish was a solo fifth in 1993.

RANKING: Which current players perform the best in the four majors?

Arnold Palmer
Major titles: 7 – Masters (4), British Open (2), U.S. Open (1)
Attempts to complete Grand Slam: 34
Closest call(s): T-2 at 1964, 1968, and 1970 PGA Championships
The King never quite ruled all four major championships, coming up just short of claiming the Wanamaker Trophy on three occasions. He came the closest at the 1968 PGA at San Antonio’s Pecan Valley Golf Club when he slashed a 3-wood from the rough to about eight feet on the final hole, but missed the putt. Julius Boros, 48, won by a shot to become the oldest major champ ever — a record that still stands.

Sam Snead
Major titles: 7 – Masters (3), PGA Championship (3), British Open (1)
Attempts to complete Grand Slam: 23
Closest call(s): Four runner-ups at U.S. Open
Snead’s most heartbreaking losses at the U.S. Open came before he had secured titles in the other three majors. In 1937, he triple bogeyed the final hole when par would have won, and 10 years later, he missed a two-footer to lose to Lew Worsham in a playoff. But Snead also nearly completed the slam in his first chance, finishing T-2 at the 1949 U.S. Open after he had won that year’s Masters.

Lee Trevino
Major titles: 6 – U.S. Open (2), British Open (2), PGA Championship (2)
Attempts to complete Grand Slam: 16
Closest call(s): None
Trevino made it clear he was never a big fan of either Augusta National’s co-founder, Cliff Roberts, or the course itself. And it showed. In 20 career starts at the Masters, Trevino never finished better than T-10, and he even skipped the event four times during his prime.

Byron Nelson
Major titles: 6 – Masters (2), PGA Championship (2), U.S. Open (1)
Attempts to complete Grand Slam: 1
Closest call(s): None
Nelson never won the British Open because he basically never played in it. After finishing fifth in his debut in 1937, Nelson only competed in the event one more time — his only time after winning the other three majors — in 1955, when he finished T-32. This wasn’t that unusual at the time. As mentioned, Hogan only played in one British Open, and Arnold Palmer is largely credited for making the event popular with American players.

Phil Mickelson
Major titles: 5 – Masters (3), British Open (1), PGA Championship (1)
Attempts to complete Grand Slam:
Closest call(s): Has a record SIX runner-ups at the U.S. Open
Mickelson’s numerous close calls at the national championship have been well documented, but the one that hurts the most came at Winged Foot in 2006. With a one-shot lead on the 72nd hole, Mickelson made a double bogey, handing the title to Geoff Ogilvy. Mickelson’s Grand Slam hopes remain alive, but at 47, he’s running out of chances. That’s what made his decision to skip the 2017 U.S. Open at Erin Hills for his daughter’s high school graduation such a big story.

And now there are two golfers in their primes, Jordan Spieth and Rory McIlroy, who are just one major away from completing the career Grand Slam. So far, McIlroy, 28, is 0-for-3 at the Masters since winning the third leg at the 2014 British Open, but he’s finished in the top 10 in each try, and he has the benefit of trying to complete the task on the same course each year — a place where he was the 54-hole leader in 2011 when he was just 21.

Spieth, who just turned 24, will face a rotating target of tracks at the PGA starting with the 2017 edition at Quail Hollow, but he’ll have even longer to finish this feat than McIlroy. Not that either should need much time if they’re going to do it. The five guys who have completed the career Grand Slam needed an average of just two attempts to get it done. Regardless, throw in an aging Mickelson and we’ve now got three of the four majors where the career Grand Slam will be a big topic of conversation. And it could be a fun thing to talk about for years to come — well, fun to talk about for everyone other than the three trying to achieve it.