Who performs best in majors? Crunching the numbers in the post-Tiger era 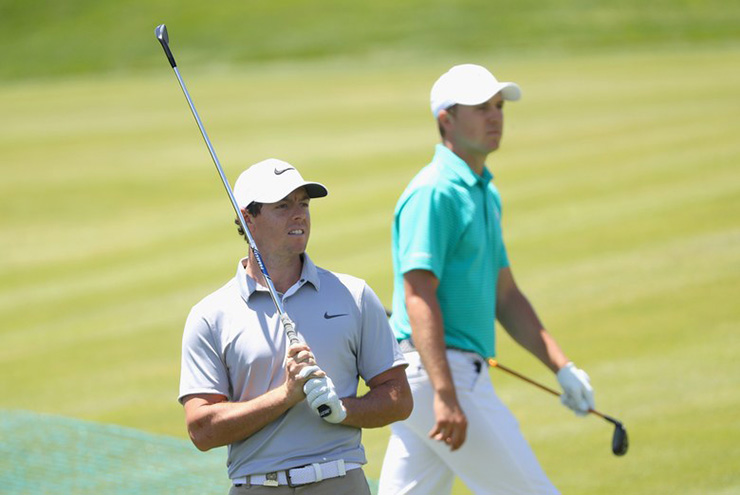 OAKMONT, PA – JUNE 13: Rory McIlroy of Northern Ireland and Jordan Spieth of the United States during a practice round prior to the U.S. Open at Oakmont Country Club on June 13, 2016 in Oakmont, Pennsylvania. (Photo by Sam Greenwood/Getty Images)

When an injured Tiger Woods held off Rocco Mediate at the 2008 U.S. Open, it seemed destined to be yet another highlight in a career just hitting its prime. Instead, nearly a decade later, the victory appears increasingly likely to be Woods’ final major-championship triumph. That dramatic win at Torrey Pines gave Woods 14 major titles at age 32, putting him in position to shatter Jack Nicklaus’ record of 18 majors. But nine years later, thanks to a combination of injuries, surgeries, swing changes, personal problems and perhaps, better competition, the 41-year-old Woods, is still stuck on 14.

But while Woods’ pursuit of history stalled, many golfers saw their careers take off during the same time, which coincidentally, kicked off with a Open Championship at Royal Birkdale. Sure, Woods continued to win PGA Tour events and even claimed the tour’s Player of the Year Award in 2009 and 2013, but his lack of wins in golf’s four biggest events has opened the door for others. Let’s examine the difference between the Tiger and post-Tiger Eras.

Woods won 14 of his first 46 majors as a pro, culminating with that memorable 2008 U.S. Open. During that 11-plus-year span, there were 26 different major champs, including Woods, and 22 first-time winners. In the 36 majors that have been played since (a sample size of eight fewer majors), there have been 28 different winners, including 23 first-time major winners. Both eras produced six different multiple winners, but because our ranking only focuses on the post-Tiger Era, we’ll focus on those of a more recent vintage. Leading the way with four major titles, Rory McIlroy is the only golfer to win more than two over the past nine years. Phil Mickelson (who won two of his five career majors), Jordan Spieth, Bubba Watson, Martin Kaymer and Padraig Harrington (who won two of his three career majors) are the only others to win multiple majors during that time.

With such ongoing parity—the past seven majors have been won by first-time champs—it raises the question: Who has been the best player in golf’s four biggest events since Woods lost his dominant grasp?

We decided to find out by figuring out a performance average in majors for the past nine years and ranking the results. To do that, we started by using the FedEx Cup points system for majors (600 points for a win, 330 for a runner-up, 210 for third place and so on, with a missed cut earning zero points). We then divided that by the number of majors played in that stretch to get an average, in order to give younger players a chance of stacking up against the veterans who played in more majors and had the chance to accumulate higher point totals.

Whereas a player like Adam Scott has had an opportunity to play in all 36 events over the past nine years, younger players like Jordan Spieth haven’t. So how do you compare players with such a disparity in experience? We decided to use recent U.S. Open winner Brooks Koepka as the cut-off point since he has the fewest major starts (15) of any winner during this time period. One could argue that Koepka’s relatively small sample size that includes a win (and the 600 points that came with it) unfairly benefitted him—Koepka came in No. 5 on our ranking—but we thought his body of work was big enough to include. Our 15-event cut off meant other big names such as Jon Rahm, Justin Thomas and Patrick Reed weren’t included. Considering those three have combined for just one top 10 in a major in 22 starts, though, none would have cracked our top 30. Anyway, here’s how our ranking shook out: 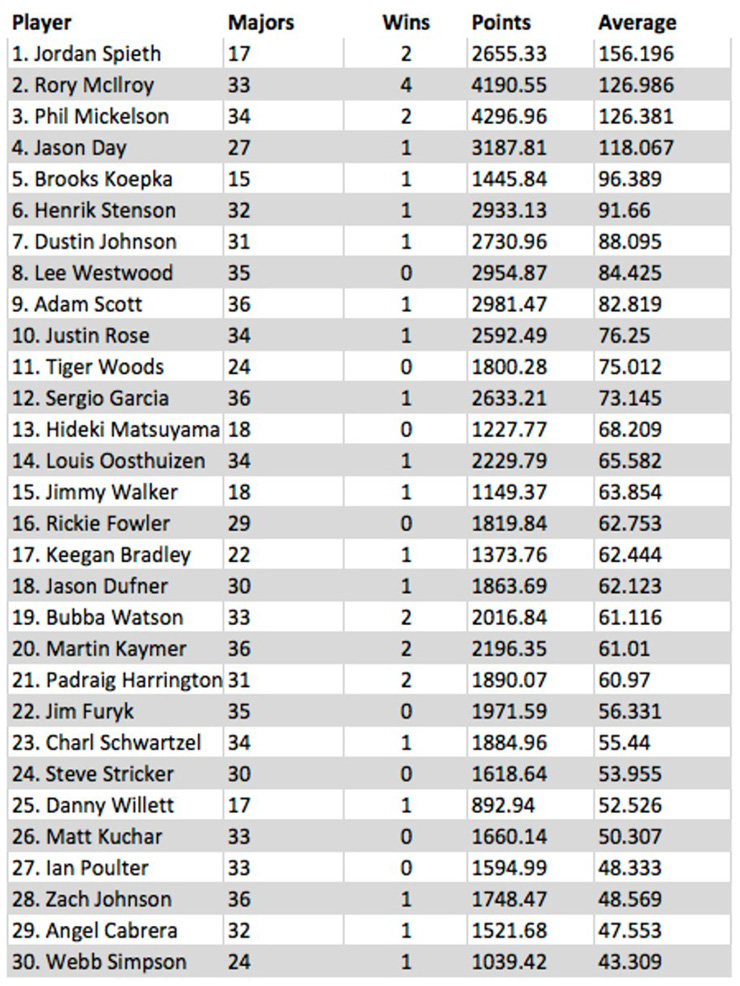 As you can see, Jordan Spieth has the highest point average of any player over the past nine years in major championships—and it’s not even close. Like Koepka, Spieth has a relatively small sample size having only started in 17 of those 36 majors. But we’re satisfied with him leading our list after a historic 2015 campaign alone that saw him win the Masters and U.S. Open while having close calls at the British Open and PGA Championship. Spieth is No. 1 because he’s been the best since turning pro at the end of 2012 and his 156.196 average is roughly the equivalent of averaging a fourth-place finish (worth 150 FedEx Cup points) per major start.

So how is Rory McIlroy, a man who has won two more majors as Spieth, not No. 1? Well, he’s won twice as many majors as Spieth in essentially twice as many starts (33). What’s more surprising was that McIlroy, who made his major debut as a pro at the 2009 Masters, barely edged out Phil Mickelson (126.986 to 126.381) for the second spot. In basically the same amount of starts (Mickelson has 34 to McIlroy’s 33), McIlroy out-won Mickelson 4 to 2 during this span, but Mickelson’s resume full of other high finishes (Nine other top-five finishes, including six runner-ups) in that span made up the difference.

Jason Day (118.067) came in fourth place, topping the remaining three multiple-major winners (coincidentally, Bubba Watson, Martin Kaymer and Padraig Harrington finished 19th, 20th, and 21st, respectively) in this stretch thanks in large part to finishing in the top 10 in nearly half (13) of his 27 career major starts, including that lone win at the 2015 PGA Championship. And then there’s a big drop off to the aforementioned Koepka, who boasts an average of 96.389.

We won’t go through every name on the list, but current World No. 1 Dustin Johnson, whose lone major win at the 2016 U.S. Open was preceded by a well-chronicled series of close calls, is worth noting at No. 7. That may seem a bit low, but he compares favorably to guys like Adam Scott (No. 9) and Justin Rose (No. 10). Also, Louis Oosthuizen is a sneaky-high No. 14, thanks to his 2010 British Open win, three runner-ups, and not much else to speak of. Meanwhile, Zach Johnson and Angel Cabrera make the list, but take a hit since their two majors are split up between these two time periods.

What came as somewhat of a surprise, however, is Lee Westwood. Despite zero major titles, he checked in at an impressive No. 8, easily the highest of all non-major winners. Westwood’s plethora of close calls in these events—along with a decorated Ryder Cup and European Tour career—have made him this generation’s clear-cut best player without a major, especially since Sergio Garcia left that list with his Masters triumph in April. Speaking of Sergio, one of the few golfers to play in every major over the past nine years, even with that recent win, he couldn’t crack the top 10 of this list (No. 12).

And one spot ahead of the Spaniard is his longtime nemesis, Tiger Woods. That’s right, even during his difficult stretch, Woods is still a respectable No. 11 on this list. Although he benefits (if that’s the right word) from not playing in one third of the majors contested because those WDs don’t hurt his average, the missed cuts do, including MCs in his last three major starts (2015 U.S. Open, British Open and PGA Championship).

Still, despite a decent track record the past nine years, the difference between how Woods started his career in majors is startling. In Woods’ first 46 majors, he missed the cut once (2006 U.S. Open). During the past 36 majors, he’s failed to make it to the weekend six times to go along with those 12 DNPs, including the first two that came with the season-ending surgery he underwent following that 2008 U.S. Open win. When he returned, Woods finished in the top six in five of his next six majors (including that runner-up to Y.E. Yang at the 2009 PGA). In total, he had nine top sixes (his only top 10s) in majors in the past nine years.

Woods is second to Westwood among non-major winners (again, over the past nine years). Taking Woods out of the mix because of all his prior success (we also removed Jim Furyk, who previously won his lone major at the 2003 U.S. Open), here’s a look at the top 10 major performers during this span among players who have never won a major: 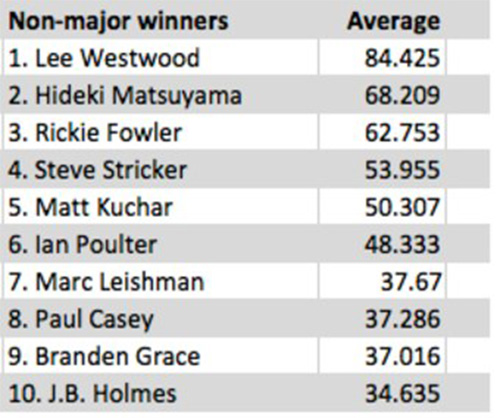 That’s not to say this is a list of the current best players without a major. Young guns like Rahm and Thomas, who were excluded from our ranking, would probably have something to say about that. And golf fans will probably have something to say about our methods. But with a top four of Spieth-McIlroy-Mickelson-Day, Westwood leading the way among non-major winners, and even Woods, the man responsible for this study, finishing just outside the top 10, we’re happy with how it turned out.

It’s been nine years since Woods last won a major championship, and in another nine years, he’ll be eligible for the senior tour. And with such a revolving door at the top of the game currently – and Woods nowhere near a return, let alone to top form – we’d expect those next 36 majors over the next nine years to play out more like these past 36 with a lot of players divvying up the titles. The days of one player dominating the sport like Woods did appear over (for now), but in Spieth (23), McIlroy (28), and Day (29), there are at least three young—and proven—candidates with a chance to seize control of this next era.