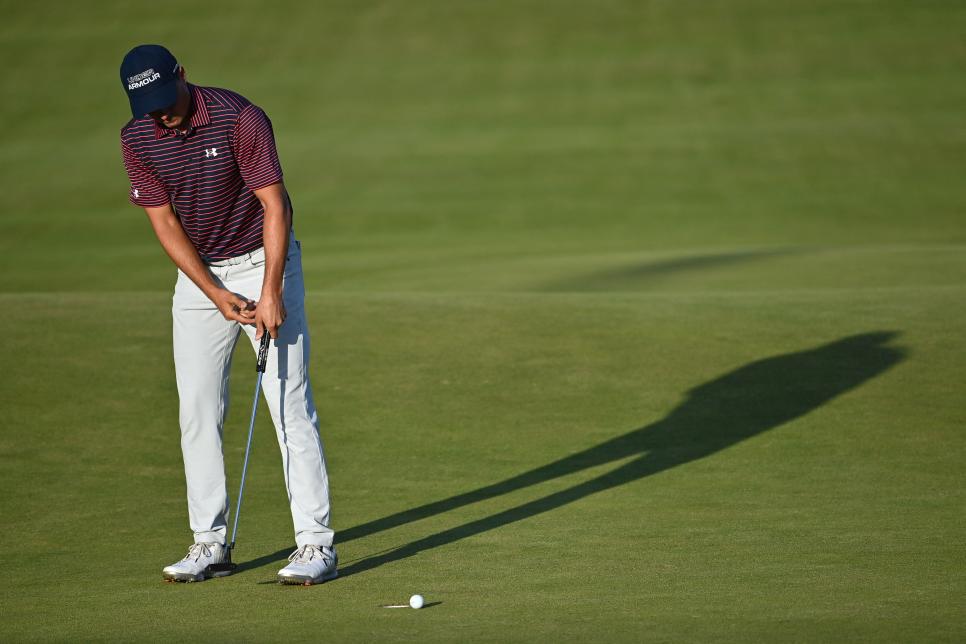 By Sam Weinman
There is a cliché in golf about how dinner always tastes better when a round ends on a positive note. Make a clutch birdie on 18, and it will be delicious. Make a bogey, and you might need help washing it down.

Then you have what Jordan Spieth did the last two holes at Royal St. George’s, and it’s possible he won’t allow himself to eat at all.

Tied for the lead for most of the back nine Saturday with Louis Oosthuizen and Collin Morikawa, Spieth appeared in total control in his pursuit of a second Open Championship title—right up until he didn’t. First, Spieth bogeyed the 17th when his approach shot caught the green’s false front and his ball rolled back in the fairway. Then came 18, where he hit the green with his short approach from out of a divot hole only to run his birdie attempt past the hole and shockingly miss this two-foot comebacker for par.

Just a bit outside for Jordan Spieth on a two-footer. pic.twitter.com/9iedfcDAp3

You might call it a disappointing end to the day, except Spieth swiftly decided it wasn’t the end of his day. Because he literally ran off the green and through the tunnel underneath the grandstands (leading to some speculation that he had somewhere to “go.”)

Spieth running up the tunnel like he just missed the game-tying field goal pic.twitter.com/W7jHNP5Ko4

And then, after signing his scorecard, Spieth proceeded directly to the practice green to work on short putts under the supervision of instructor Cameron McCormick and caddie Michael Greller.

Jordan not wasting any time after 3 putt on 18 #TheOpen pic.twitter.com/cM4ipkHLqm

Now three back of leader Oosthuizen heading into the final round, there remains a chance Spieth will leave the practice green at some point. But if he doesn’t like what he sees, someone might want to at least bring him some take-out or something.