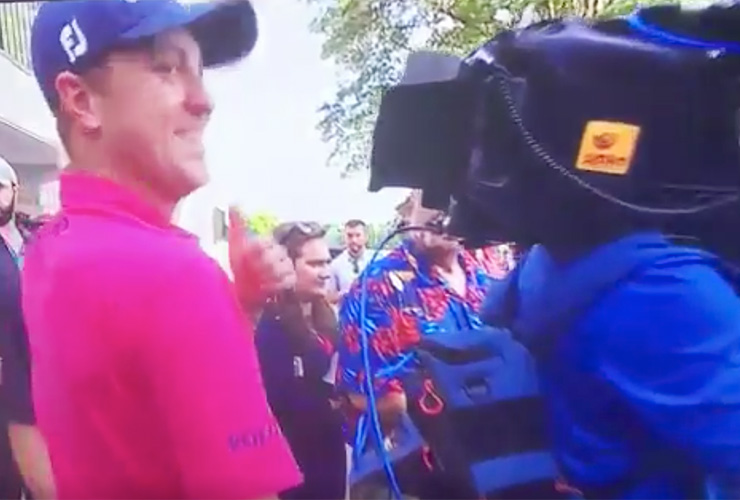 By Alex Myers
No matter what Jason Dufner does the rest of his career, he’ll leave an impressive legacy as a major champion, a Ryder Cupper, and the creator of “Dufnering.” But he also started the most unusual of golf’s major championship traditions: The celebratory PGA Championship butt slap.

It all began when Dufner won the PGA at Oak Hills in 2013. As he was greeted by his then wife, Amanda, on the 18th green, Duf gave her a little tap on the bum causing an instant viral moment:

Stick-in-the-muds Rory McIlroy (2014) and Jason Day (2015) weren’t involved in any butt slaps — at least, as far as we know — but Jimmy Walker brought the fun ritual back when he won the Wanamaker Trophy in 2016:

Win a major, give your wife a love tap. Jimmy Walker is a true champion. #PGAChamp https://t.co/ZybKrIh09I

And on Sunday at Quail Hollow, the odd tradition continued — just not how you think. Winner Justin Thomas gave his girlfriend a celebratory kiss and a hug, but that was it. Instead, he got slapped on the butt by his buddy, Jordan Spieth. And Jordan got him pretty good:

Boys will be boys, right? Justin tried to walk it off like he didn’t notice, but you know he felt that. And if his buddy wins next year’s PGA to complete his career Grand Slam, JT can return the favour. No matter who wins, though, I think we can all agree this is a custom coincidence that must might continue in 2018 at Bellerive Country Club. Keep your eyes peeled next August.