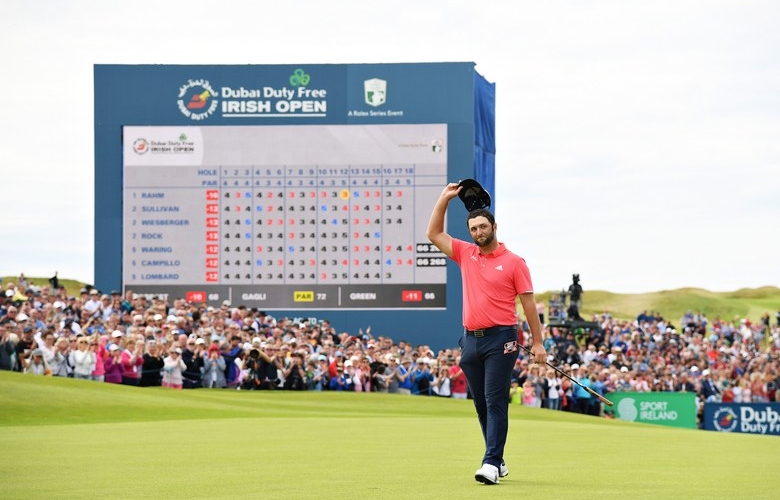 Ross Kinnaird
Jon Rahm waves to the crowd after his putt on the eighteenth hole during the final round of the 2019 Dubai Duty Free Irish Open.

By Ryan Herrington
It’s been a nice year for Jon Rahm, but when you’re ranked 11th in the world and a European Ryder Cupper with oodles of talent, nice years aren’t exactly what you’re after.

Tired of top-10 finishes—he’s had nine in 12 worldwide starts in 2019, most of any golfer without a victory—the 24-year-old Spaniard seized the moment in what has quickly become one of his favourite events, the Dubai Duty Free Irish Open. With a closing eight-under 62 (that somehow included two bogeys), Rahm leaped from a tie for ninth to start the day at famed Lahinch Golf Club to a two-stroke win over Andy Sullivan and Bernd Wiesberger.

“I keep saying I love this tournament, I love this country, I love the people. I feel like I’m home every time I come,” Rahm said after closing out his fourth career European Tour win with a 16-under 264 total, adding a second Irish Open title to the one he claimed two years ago at Portstewart Golf Club.

Rahm started the final round five strokes back of Robert Rock, who just missed becoming the second player to shoot a 59 on the European Tour on Saturday when a 25-foot eagle try on the par-5 18th strayed slightly left of the hole. A 10-under 60, with birdies on his final six holes, still felt good for the 42-year-old Englishman looking for his first Euro Tour victory since 2012.

But while his swing appeared flawless over the first 54 holes at Lahinch, the pressure of the final round seemed to change things. Rock struggled, making just two birdies while shooting an even-par 70 to finish three back in a tie for fourth (his consolation was earning a spot into the Open Championship with his finish, as did Wiesberger and Paul Waring).

Starting four groups ahead of Rock, Rahm got hot mid-way through his front nine, making birdies on the fifth, seventh and ninth holes to turn in three-under 31. He then played an impressive back nine, making an eagle on the par-5 12th hole and four birdies, including three on his final five holes.

“That eagle on 12 just completely got me going,” Rahm said. “Even though I had that little mistake on 13 [one of his two bogeys], I knew my target number was 15 under. I’m definitely thrilled with the back nine I had.”

After taking the lead for good on the 14th hole, Rahm had a two-stroke edge when he finished up his round and waited to see if anyone else on the course could catch him. Among those trying was a fellow Spaniard, Rafa Cabrera-Bello, one back of Rock at the start of the day before taking a three-stroke lead early after birdies on three of his first five holes. But he couldn’t keep things going, finishing with a one-under 69 to join Rock at T-4.

Meanwhile, Sullivan and Wiesberger each were making Sunday charges, but they couldn’t keep up the pace with Rahm, shooting a pair of 66s to sneak into second place.

Rahm’s Sunday run was setup by his play on Saturday. Tied for 38th, seven strokes back of the lead entering the weekend, Rahm posted a 64 to jump 27 places.

“My game is in great form, it just didn’t show the first two days,” Rahm said. “I couldn’t hole the putts, and the weekend was the complete opposite. The putts started rolling in from everywhere. I felt really confident. I knew I could do something.”

Suffice it to say, Rahm’s performance on the Irish links bodes well with the Open Championship at Royal Portrush two weeks away. And it continues a nice run of late for Rahm, who finished T-3 at the U.S. Open at Pebble Beach and T-2 in Spain at last week’s Andalucia Masters.

Given Rahm’s affinity for golf in Ireland, it’s not surprising he’s optimistic about his chances in the year’s final major.