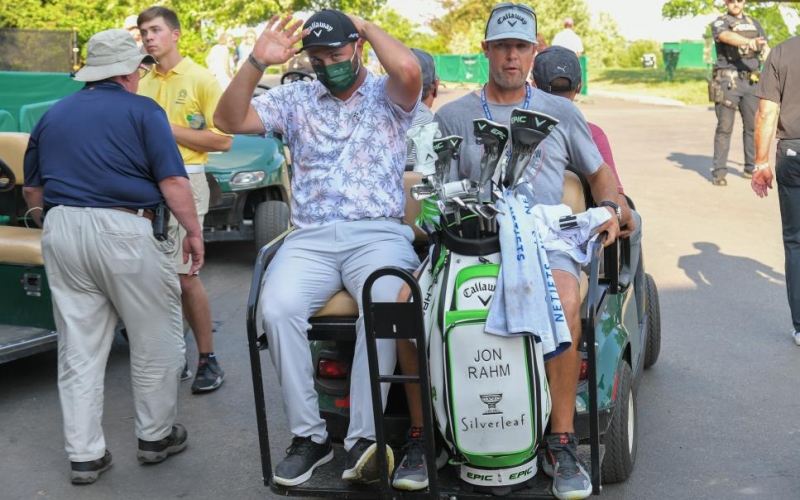 Ben Jared
Jon Rahm gets shuttled away after testing positive for COVID-19 after the third round of the Memorial Tournament.

By Brendan Porath
Jon Rahm shot one of the great rounds in Memorial Tournament history on Saturday, an eight-under 64 to take a commanding six-shot lead as he attempted to defend his title from 2020. Everyone watched it go down on CBS and on the grounds at Muirfield Village Golf Club. But it won’t go down in the record books, as it was all wiped out as he walked off the 18th green, where, in a dramatic and discomfiting scene, PGA Tour officials approached him and told him he had tested positive for COVID-19.

Rahm had to immediately withdraw from the tournament under PGA Tour protocols. The tour quickly issued a statement on the positive test, clarifying the timeline throughout the week.

On the evening Monday, May 31, the PGA TOUR notified Jon Rahm that he was subject to contact-tracing protocols, as he had come in close contact with a person who was COVID positive. Per the TOUR’s COVID Health & Safety Plan, Rahm was given the option to remain in the competition and enter our tracing protocol, which includes daily testing and restricted access to indoor facilities. Rahm has remained asymptomatic.

Rahm has tested negative every day, but his most recent test – which was performed after the conclusion of his second round (rain delayed) and before the start of his third-round – returned positive at approximately 4:20 p.m. ET while Rahm was on the golf course. The PGA TOUR’s medical advisor requested a confirmatory test on the original sample, which came back at 6:05 p.m. ET, and was also positive.

The PGA TOUR’s medical advisor notified Rahm immediately upon completion of his round, and under TOUR protocols, he will be withdrawn from the competition. Rahm is now in isolation, and in accordance with CDC guidelines, he will need to remain in isolation through Tuesday, June 15.

Rahm’s knees buckled and he bent over in agony as he was informed. The CBS broadcast and onlookers at Muirfield Village were left with little clarity about what was happening until Dottie Pepper tracked down the news of the positive test moments later.

The Spaniard’s Saturday started early with a hole-in-one in the resumption of his second round en route to capping a 65. Then he turned around in the third round to match the lowest 54-hole mark in tournament history at 18-under 198. As Justin Ray noted, it was Rahm’s best strokes-gained round of his career. He flag-hunted all day and raced away from a loaded group of chasers that included past winners at Muirfield Village in Patrick Cantlay and Collin Morikawa. Those two, it now turns out, will be your co-leaders come Sunday afternoon in Dublin, Ohio.

In addition to the WD at an event where he was suddenly an overwhelming favourite to close out for his sixth career PGA Tour victory, Rahm will now have to be in isolation until June 15. That’s two days before the start of the next men’s major championship, the U.S. Open at Torrey Pines. It was a tournament in which he was already considered among the favourites, having won his first career PGA Tour title at Torrey Pines in the 2017 Farmers Insurance Open.