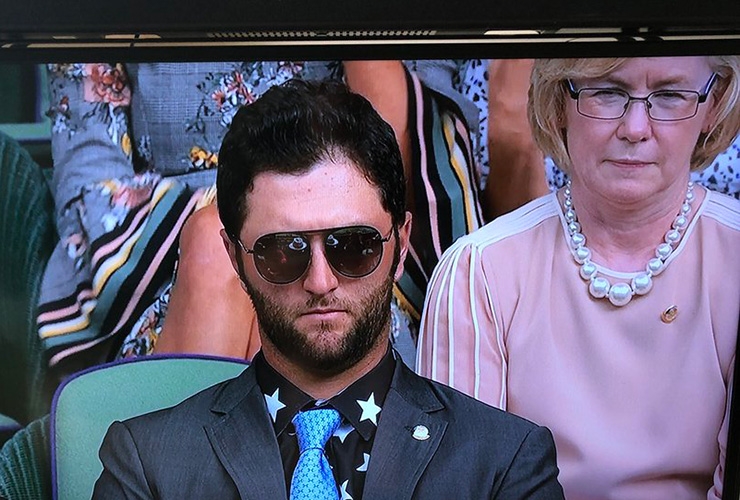 By Christopher Powers
After shooting a stunning final-round 62 on Sunday at Lahinch to win the Dubai Duty Free Irish Open, Jon Rahm has to be feeling really good about himself. He’s peaking just in time for the Open Championship at Royal Portrush, where he’ll be coming in fresh as he’s taken this week off rather than play in the Scottish Open. Because of that, you have to like his chances to contend for his first major title in Northern Ireland next week.

On Wednesday, Rahm utilised one of his days off by going to Wimbledon, where many of the top European golfers in the world could be seen on Tuesday. Check out this crew:

Great day at Wimbledon in The Royal Box with these beautiful people! Shook hands ? Fed and Nadal yesterday. Let’s hope the magic rubs off on me for next week! pic.twitter.com/jd0Zq5RUbd

Apparently, Rahm was either not invited or he couldn’t make it Tuesday (if we go with the former … trouble in paradise for the Euro Ryder Cup team?!?!?). Rahm did make it on Wednesday though, and the BBC broadcast happened to capture him in an, um, interesting outfit. Fellow European tour pro Thomas Pieters happened to be watching, and he couldn’t help but roast the Spaniard for his fashion choices:

Hey, to each their own. If Rahmbo looked in the mirror and felt good about that this morning, then good for him. The man just shot a 62 on Sunday to win a golf tournament, let him dress how he wants!

That being said, we are anxiously awaiting Eddie Pepperell’s take on the matter. Tick tock.