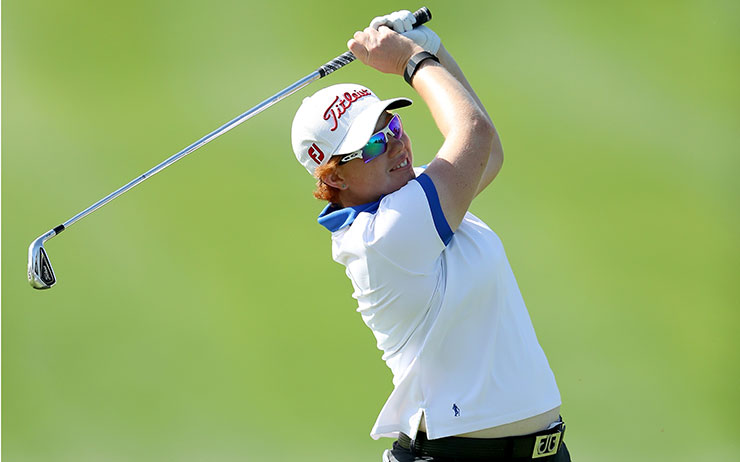 Felicity Johnson reckons she’s come up with the blueprint to stop the irrepressible Shanshan Feng at next year’s Omega Dubai Ladies Masters.

“Yeah, I think we have to play maybe a couple less holes than her,” the vanquished overnight leader quipped after Feng clinched an awesome foursome of Dubai titles with a closing 64.

“She seems to have got rights to it at the moment. Is that four from five or something, something ridiculous like that? And even when you think she might not have been in contention today, what’s she, five back today, and stormed it.”

That Johnson was able to see the light side of a dark day personally speaks volumes of the red-headed 29-year-old.

The Englishwoman slipped from the summit of the leaderboard following her own 64 around Emirates Golf Club Friday to a disappointing share of seventh on the back of a topsy-turvy 75.

After bogeying the first, Johnson settled down with a up and down birdie on the short par 4 2nd. An eagle-birdie combo on the par 5 3rd and par 4 5th respectively saw her extend her overnight lead of -7 to -10 for a commanding four shot lead over Charley Hull (England).

But then Fend fired up, Johnson began spraying her approaches and the chance to return to the winners circle for the first time since the 2011 Open de France had vanished.

“I think I looked at the board at one point and I had a three-shot lead and the next I was three behind,” Johnson said.

“I knew I made a couple of mistakes, but I don’t know what her scorecard looked like. Around the turn, the back nine, there [must have been] quite a few birdies thrown in there. She just took over.”

That position enlightening leaderboard must have made for difficult reading?

“Yeah, obviously a little bit of deflation because I wasn’t playing as well as I could have done. But I kind of smiled to myself because she had some round going, so I kind of appreciated what she was doing.

“She’s one of the best players in the world, so you can never count her out of it. I knew what the situation was. I knew I had a two-shot lead. But I didn’t look at it and think, right, Shanshan’s five back, Flory is a couple back.

“I thought if I shot maybe four-under today in the conditions that was maybe forecast in the wind, I thought -11 would probably be good enough and it would have been.”

But it was not meant to be for Johnson, her final round summing up a topsy-turvy 2016.

“t’s obviously a top-10, any day, you’ve got to be happy with but I’ve kind of wanted this year to end. On and off the golf course hasn’t been a great year. To finish this way, yes, does epitomise it, but there’s some positive stuff to take into a fresh season.

“It shows what I’m working on works really well when it works, obviously yesterday [her second round 64], but it’s just more time on the range, grooving it in.

“Obviously your old faults come back under pressure like they did today. Left is my bad shot, and hit a couple of those today. I just need to go back and keep working on the same things; it works. It’s just a time process.”