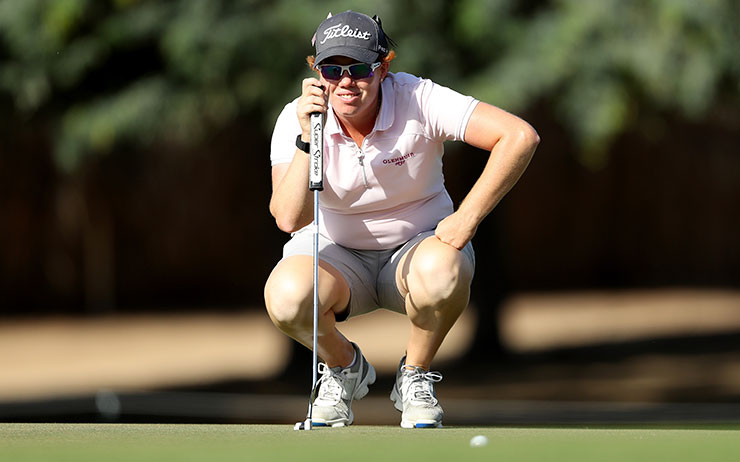 Felicity Johnson’s bio on the Ladies European Tour website describes her as “165cm tall with red hair and green eyes”. After flirting with the Majlis course record Friday, it’s clear the 29-year-old Englishwoman is the owner of a pretty striking golf game too.

Johnson will take a two-stroke lead into the final round of the €500,000 Omega Dubai Ladies Masters at Emirates Golf Club on Saturday after producing a sizzling second round 64.

It propelled her from 47th after an opening 73 to the summit of congested leaderboard in the shortered 54-holer, two shots clear of first round pacesetter Florentyna Parker who backed up her opening 67 with an even par 72.

“I hit a lot of really close iron shots. I holed out really well with my putts but I had probably seven birdie putts within four feet, so that always makes the game a little bit easier,” Johnson said in the understatement of the day.

“All the ones I hit close, I converted, so 24 putts. Hitting a lot of good iron shots, you’re going to have a good score.”

Johnson has played the last 10 Dubai events but has missed the cut three times in her last five appearances. And after eight weekends off in 15 LPGA Tour starts in 2016 and five more missed cuts on the LET, there was little hint of her impending brilliance Friday.

To put the 64 into context, the next best score Friday was 70. Rookie-of-the-Year Aditi Ashok was one of eight players to card a two-under second round, propelling the Indian teen into a share of third place with Dane Emily Kristine Pedersen at –4.

Three-time defending champion Shanshan Feng also had 70 but at -2, she has much ground to make up on the red-hot leader.

Johnson owns two LET titles but will have to rewind to her 2011 Open de France triumph for winning vibes today.

“I’ll draw on some of that experience and any time you’re in contention the last day, it’s going to be fun. A good ball-striker usually does well here, which I think I am a lot of the time. It sets up well for my draw,” Johnson said.

“You don’t worry about other people. I’ll try and make as many good golf swings as I can, make myself chances again [and] we’ll see what happens.”