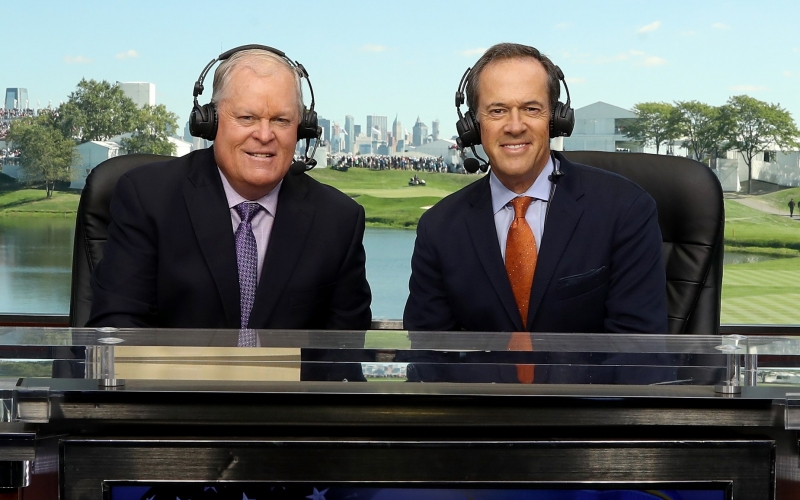 By John Strege
NBC’s telecast of the Waste Management Phoenix Open on Saturday was less about the golf and the well-oiled chorus at the boisterous 16th hole. It was more about saying goodbye.

Johnny Miller was working his final broadcast as an analyst for NBC Sports, ending a 29-year run, and it was an emotional sendoff that hit all the right notes, including those from Jake Trout and the Ballwashers. NBC’s Peter Jacobsen, aka Jake Trout, introduced a song, “I’m Gonna Miss Johnny Miller.” It included Miller uttering the forbidden word, choke, on which his broadcast career turned, in his very first broadcast. It came on the 72nd hole of the Bob Hope Chrysler Classic in 1990, when the same Peter Jacobsen faced a long-iron second shot, all carry over water while attempting to win the tournament.

“This is absolutely the easiest shot to choke on,” Miller said, seconds before Jacobsen pulled it off en route to a victory.

Miller worked without an internal editor, a refreshing change in television golf. He did not mince words, a reminder of which he offered early in the telecast, when Scotland’s Russell Knox fanned a birdie putt well left of the hole on the 16th green.

“That was about as good as the food in Scotland,” Miller said.

Miller’s partner in the booth, Dan Hicks, called it “springing his A-game.”

RELATED: 7 questions with Dan Hicks on Johnny Miller: The quirks you don’t see, Johnny’s “legendary lexicon,” and what he’ll miss most about Miller

His honesty was alluded to among the tributes pre-recorded. Rickie Fowler noted that Miller, “kicked me in the butt a few times. In a good way.” Patrick Reed cited Miller’s insisting he supplement his patented draw with a fade. “I’ve got to thank you for being at Doral and busting my chops for always hitting a draw,” he said. “Now I’m a little bit more rounded player. I can hit both shots. Thanks for that.”

“Sometimes a father to his son says some things that sound a little tough, but it’s for the right reasons,” Miller replied. “I feel like I almost look over these young guys and want them to step it up and move up a notch. Sometimes it takes some commentary to get them to check things out.”

President Donald Trump complimented Miller on his analysis. “I’ve tried to copy it, but it hasn’t worked out the same way,” he said. “Congratulations on two incredible careers and maybe most importantly on an incredible family.”

Nearing the end of the broadcast, each member of the NBC crew bid him adieu, none more emotionally than Roger Maltbie, who like Miller grew up in California’s Bay area.

“Johnny, a chance to speak from the heart,” Maltbie said, wrestling with his emotions. “You’ve been a part of my life for as long as I can remember. When I was 12, 13, you were 16, 17, you were winning all the junior tournaments and I wanted to be like you. In ’66, at age 19, you played so great at the Olympic Club [in the U.S. Open] and all the junior golfers in Northern California wanted to be like you.

“We got a chance to share golf’s greatest mulligan. Got to do this for 27 years with you. It’s bittersweet. I’m going to miss you. I hope you catch the biggest fish you ever caught in your life. And I hope you’re the grandpa you want to be.”

Through it all, Miller fought back tears. He thanked the viewers for accepting “my form of commentating, which was not normal,” he said. He likely leaves with no regrets, nor should he, even for those comments that rankled players. Jimmy Roberts summed it up neatly in a piece on Miller during GolfChannel’s part of the Phoenix Open telecast on Saturday.