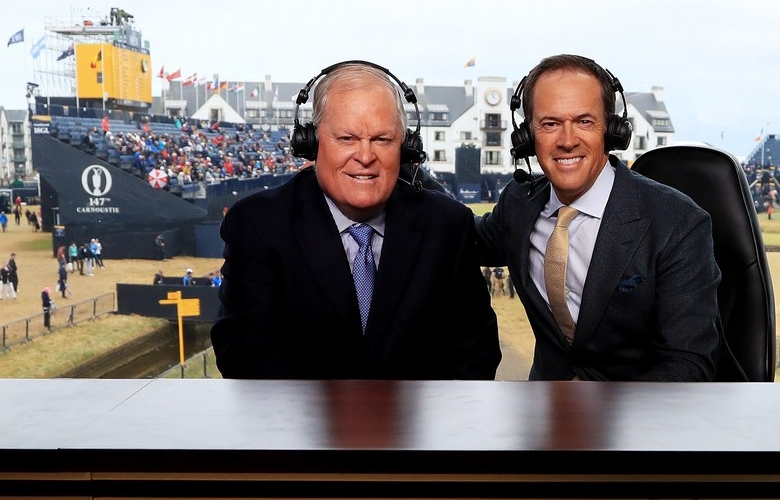 Andrew Redington
NBC commentators Johnny Miller and Dan Hicks appear on set during the second round of the 147th Open Championship.

By Alex Myers
For nearly three decades, Johnny Miller has been a staple of golf and sports television. But riding shotgun for a record-breaking 19 of those years has been NBC play-by-play man Dan Hicks. Just hours before the two began—and ended—a 20th consecutive year of sitting side-by-side in the 18th-hole tower with the retiring Miller’s final broadcast from the Waste Management Phoenix Open, we talked to Hicks about his longtime booth partner.

RELATED: Johnny Miller’s farewell: An NBC sendoff that had him, well, choking up

1. What do you remember about the first time you met him or worked with him? Was he an intimidating presence?
Actually, he doesn’t remember, but I was at Tucson Open as just a middle-school kid down the road. My mom would get me out of school because she was a big fan of the golf tournament, and Johnny Miller would come in and win every year by multiple shots. I think I might have asked him for an autograph. So then after I got a job in Tucson at the local NBC affiliate, I interviewed. So that was the first time I actually met him and he gave me a fantastic interview about TPC courses. Time goes on and the next time I saw him was when I first got to NBC Sports in 1992. He was at the Players Championship, and he didn’t know me. I was the new kid. I’ll never forget he was on a golf cart near the television compound and I walked by and he slaps the open seat next to him and goes, “Get in, champ, I’ll show you the course.” And I was like, you’ve got to be kidding me. I cannot believe this is happening. He couldn’t have been nicer. He showed me around TPC Sawgrass, and I’ll never forget that. To go on from there and not only work with him, but share the tower with him has been a dream come true.

2. Once you guys were in the booth together, did the chemistry come right away? And did you think you guys would spend a record amount of time together?
You never know how the chemistry is going to go. And I would say it wasn’t one of those “Oh, this is the greatest thing ever” instantly. I think Johnny was keeping a close eye on me. He’d obviously heard me being on another tower for years, but sitting up next to Johnny is an entirely different story. I kind of had to earn his respect. That takes time, that takes shows. But I think he quickly saw how passionate I was about it and how dedicated I was to it and how I could help him even become better than he was. And it just evolved into great chemistry where we knew what to expect of each other through an unspoken language. So it didn’t take long, but I had to earn his trust.

3. Is there a tournament that you guys worked together that stands out? That you guys seem to reminisce about most?
There have been so many incredible moments through the years, but it always seems to go back to Tiger’s win at the 2008 U.S. Open. It was magical in so many ways. … I thought as we walked out of booth on Saturday after Tiger made those two eagles—one of which Johnny predicted that changed the entire complexion of the championship—I told Johnny, “Remember this day. I don’t know how many years we’ll get to do this, but it won’t get any better than that.” So the next day, he sinks the putt to tie Rocco and I said, “Forget about what I said last night. This is the best.”

We were counting up tournaments, and Tiger, obviously, has won more times with Johnny in the booth than any other player. And it’s been amazing to share the spotlight with Johnny with Tiger right there with us. When I first got in the booth, one of my first events was Tiger’s second U.S. Amateur win at Newport Country Club. I’ll never forget, Tiger was playing Buddy Marucci and Johnny said, “I wouldn’t be surprised if he stuffs this in there and just ended it,” and that’s exactly what he did. So we’ve done 24 times, including those two U.S. Amateurs, Tiger won. So we’ve come full circle here. We go back to 1995 when he won for the first time with Johnny in the booth and then you go back to East Lake last year. So it’s fitting Johnny’s first and last shows with me and Tiger coincided with Tiger victories. So it’s pretty poetic how that finished.

4. What’s something fans at home don’t know about Johnny? I always wonder how he spends commercials. Are snacks ever involved?
There’s a lot of great camaraderie in the booth by everybody. Some of the best stuff comes during commercial breaks. We needle Johnny. Johnny’s got a reputation of giving it to the players, but he gets needled a lot. Roger gives him the needle. We all have fun with him. I remember one time at the Bob Hope, Eddie Van Halen was there and we got into this debate at the commercial over who is the best guitar player ever. And we’re going maybe it’s Eddie, maybe it’s Eric Clapton, maybe it’s Stevie Ray Vaughn, and Johnny goes, “Well, I think Glen Campbell is a pretty good player.” We’re like “Glen Campbell!” We gave him an endless hard time for that. But that was Johnny. He was his own guy. 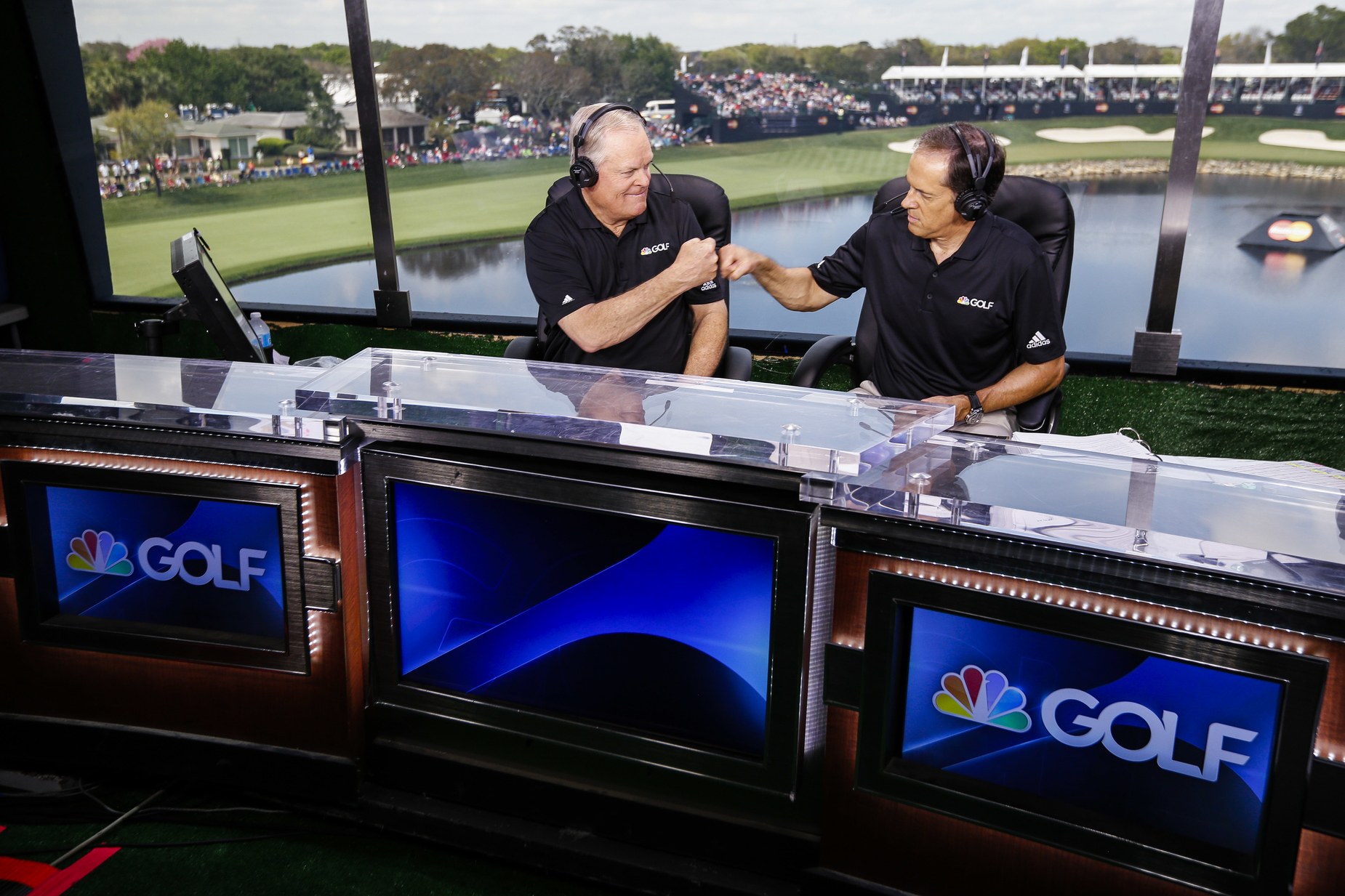 I’ve done 232 events with him. And I would say 100 of those he’s done in bare feet, which people don’t know. I’ve told the story this week about how he had his own Cheez Whiz can and that was a part of his menu by our longtime 18th-tower stage manager Kathy Noce, who also put his name on tuna fish can, which she just did for the very last time. He likes a can of tuna with a little tabasco sauce. It’s not always the most nutritious, but he’ll munch on things, he’s always grazing. So yeah, there are all sorts of little quirks and we actually gave him a bag with all the little things he likes at his going away party with the crew on Thursday night. So if he misses us, he can look at that bag and remember all the cool things that happened in the tower through the years.

5. Have you played golf with him? What’s he like on the course?
I have. Not as much as I would have liked to, but it never was one of his favourite things to do on the road. He plays most of his golf with his sons and his family. But I was fortunate enough to get him out on the golf course. We’d always play during Players Championship at a really cool course called Pablo Creek. We would usually only go about 9 holes, but it was so fun. Inevitably, I get asked if we’ve played and what it’s like, and first of all, he’s a much better player than he leads on. But more importantly, to watch him in his 60s and now 70s, he still has that great action that is so him. So to just be standing next to him all these years later and watch it is pretty cool.

6. Do you recall a moment where he said something that shocked you? And what’s your favourite Johnny Millerism?
Wow. A moment when he shocked me? There were a lot of them. I’d probably say at the 2000 U.S. Open. It was my very first U.S. Open and Tiger was on 15th tee and Johnny started saying, “I’ve got this hunch Tiger is going to do something historic this week, he’s going to set all sorts of records, and he’s going to blow away the field and say ‘see you later, guys.’” This was 14 holes into the first round. And I looked over at him as if to say, “Are you really going with this, right now?” It kind of left me speechless. And I just said something like, “Well, we’ve got a lot of golf left, we’ll see.” And lo and behold, he wins by 15. That’s probably the boldest thing I’ve ever heard him say that came true, but there are just too many to document.

As for the Johnny Miller lexicon, it’s legendary. My favourite may be one that got left behind with all the chunk-and-runs and green light specials. We’re doing our first U.S. Open at Shinnecock in 1995, and Johnny looks out at the native rough, the fescue, and goes, “Well, one of the keys this week will be to keep it out of the Dingle Dangles.” And I’m thinking to myself, did that just come to him? And it did. So we’ve had a running joke through the years, especially when we’ve gone back to Shinnecock, we say, “You’ve got to keep it out of the dingle dangles.”

7. What will you miss most about sitting next to Johnny?
I’ll miss most, in addition to the broadcasting brilliance, and just never a dull moment and every single show he makes so interesting, I’ll miss just as much just being with him. Some of the things we talk about in the tower before we go on the air. It’s not all golf, it’s not all research. We talk about life, we talk about family. He has given me more nuggets of wisdom about being a good father, being a good husband, and being a good friend than anyone I’ve ever known in my life. So that is what I’m going to miss the most.