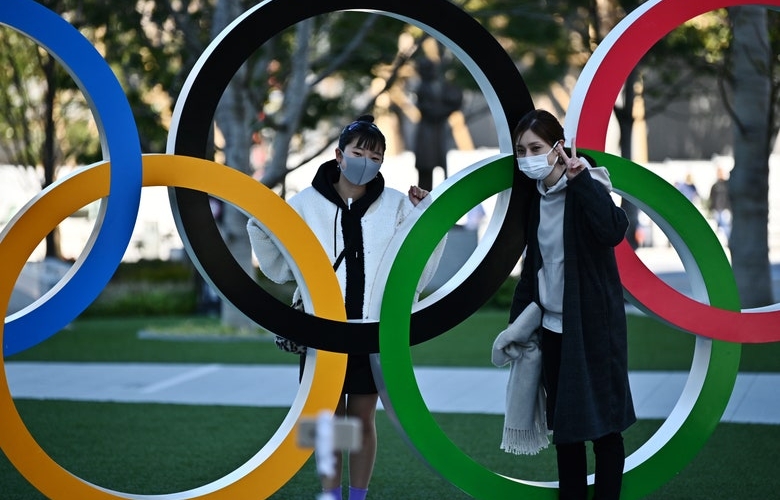 CHARLY TRIBALLEAU
Mask-clad people pose with an installation of the Olympic rings in Tokyo on February 28, 2020.

By Alex Myers
The phrase, “It’s a fluid situation,” has emerged as the unofficial motto of sports leagues throughout the ongoing coronavirus pandemic. On Monday, the 2020 Olympics became the latest big event to make a quick change in plans.

Less than a day after the International Olympic Committee announced it was giving itself a four-week window to decide the fate of the 2020 Olympics, longtime committee member Dick Pound says a decision has been made to move back the Tokyo Summer Games.

“On the basis of the information, the IOC has, the postponement has been decided,” Pound told USA Today’s Christine Brennan. “The parameters going forward have not been determined, but the Games are not going to start on July 24, that much I know.”

Pound also told USA Today he expects an official announcement to be rolled out soon.

“It will come in stages,” Pound added. “We will postpone this and begin to deal with all the ramifications of moving this, which are immense.”

Sunday’s statement, which followed a conference call with the IOC executive board, revealed an outright cancellation of the event was not an option. Pound indicated it would not take place until 2021, but details are still to be worked out.

Since Sunday’s statement, both Canada and Australia announced they wouldn’t send any athletes to the Games this year, while calling for the Olympics to move to 2021.

The men’s Olympic golf tournament is currently scheduled for July 30-Aug. 2 at Kasumigaseki Country Club, with the women’s tournament taking place a week later at the same venue. But again, both look unlikely to be played as planned.

Golf returned to the Summer Games at the 2020 Olympics in Rio. England’s Justin Rose and South Korea’s Inbee Park are the reigning gold medal winners.