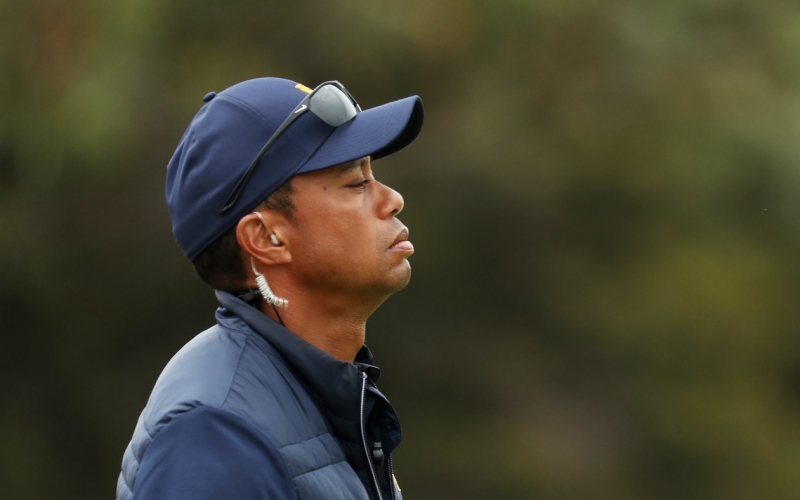 By Dave Shedloski
MELBOURNE — The United States was bound to put together a run at some point in the 13th Presidents Cup. The Americans did so Saturday without Tiger Woods winning a point.

But the plucky International team flipped the script a bit at the very end just as it appeared the Americans were on the verge of their own rewrite. There weren’t simply a few momentum swings. Emotions swished back and forth like water churned in a bathtub.

On a chilly and gray day at Royal Melbourne Golf Club, the Internationals eked out two half-points, one of them achieved via a miraculous rally by Marc Leishman and rookie Abraham Ancer against the seemingly invincible Justin Thomas and Rickie Fowler. Were it not for these late heroics by the home team, this Presidents Cup would be tied going into Sunday singles.

Instead, the Internationals managed to cling to a lead they have held since the first session, taking a 10-8 advantage to bed with them. They have not led on a Saturday night since 2003 in South Africa, the lone meeting that resulted in a tie that couldn’t be broken after three sudden-death holes between Woods and Ernie Els, this year’s captains.

Is that important? From a historical standpoint, it might have been highly consequential. No team has come from behind to win the Presidents Cup.

ATT KUCHAR“It looked like [the lead] was going to be wiped away, and the guys absolutely played with their guts out, and I could not be more proud and more happy for those guys in that cabin tonight,” Els said. “They are as excited as you could ever see a team be, losing a session 3-1, I can tell you. It was some unbelievable golf, and my hat’s off to those guys.”

RELATED: The Sunday singles pairings at the Presidents Cup

Fielding a record seven rookies, the International team saw its newcomers rise to the challenge when it appeared the Americans would sweep foursomes—a format they have dominated in the Presidents Cup by the tune of a 30-point advantage—and erase all of the four-point lead the Internationals had so assiduously built in the first three sessions. That included another strong four-ball performance in the morning that stretched their lead from three to four points, 9-5.

All of this unfolded with Woods never picking up a club all day.

Sticking to his plan and believing in his players, Woods sat himself for both Saturday sessions, a move that was a surprise to many, including his counterpart Els. The decision to forgo the afternoon foursomes matches seemed particularly odd considering that the Internationals won 2½ points in morning four-ball to retake the momentum and that Woods was playing well, going 2-0 in his first two matches with Thomas.

The captain was unmoved. “You have to do what’s best for the team,” he said.

The decision appeared to be validated when the U.S. surged ahead in all four foursomes matches. At one point, each of the U.S. duos led by multiple holes. In the first match, Dustin Johnson won his first point of the week, teaming with Gary Woodland to put down Adam Scott and Louis Oosthuizen, 2 and 1. After trailing by three holes, Patrick Cantlay and Xander Schauffele finished off Cameron Smith and Sungjae Im by the same score in the day’s third foursomes match.

Those were hard-fought wins. In between was a match the U.S. was leading handily to soon bring the score to 9-8. Thomas and Fowler, the only U.S. winners in the morning four-ball, built a 5-up lead through seven holes on Leishman and Ancer. They still led by five with eight holes left. They led by three with four to play and Ancer needing to drop a 21-footer to extend the match. He nailed it.

From there, the American duo made a series of missteps to help keep the match going. They bogeyed the last three holes while the International pair made every putt they needed, including a six-footer at the last by Ancer to secure a shocking half-point. The mood among the boisterous crowd shifted.

“To fight back from 5 down, pretty amazing feeling,” said Leishman, one of three Australians on the squad, who came into the match with an overall record of 4-9-3.

“I just believed. We kept believing,” said Mexico’s Ancer, who remained unbeaten in four outings in his debut. “We told ourselves that we were going to keep going at it, and we were going to fight until the end. We were not just going to give up.”

Thomas said he was left nearly speechless by the outcome. “It’s absolutely unacceptable for us to get a half-point.”

Added Fowler: “That’s the way match play goes. We flipped them a few times on 18 yesterday, and just gives us a little bit more work to do tomorrow.”

Soon they found themselves with a little bit more work after Matt Kuchar and Tony Finau let a 2-up lead slip away in the final five holes. They never trailed and yet could very well have lost if Byeong Hun An had curled in a seven-footer for a winning birdie on 18. It burned the left edge. On the previous two holes, Niemann and An sank par saves of 20 and seven feet, respectively, to keep the match all square.

With the momentum volleying back and forth, each side claimed the psychological upper hand at day’s end.

“It was unbelievable. You talk about coming back from the dead,” Els said.

“There was a point today where it looked like it may be 9-1 Internationals,” Kuchar said, referring actually to Friday’s foursomes when the Internationals led briefly in all five matches. But no matter.

“For us to be sitting here at 10-8, certainly feel good,” Kuchar added. “We’d rather be in the International position right now, but for us to be staring at 9-1 as a potential position to now be at 10-8, I think the guys in the locker room feel awfully good about what we were able to do today.”

Woods later echoed that talking point, only to draw an eye roll from Els, who responded, “You are the absolute optimist, aren’t you?”

Earlier in the day, the Internationals widened their lead by a point, but once again it was the Americans, as they did on Friday, holing another crucial putt at the 18th to avoid getting farther adrift. Finau did the honours from seven feet, lifting him and Kuchar into a tie with Scott and An.

In the other three matches, the International team won twice while the USA captured the opener as Thomas improved to 3-0 after a 3-and-2 victory with Fowler over Leishman and Haotong Li, who was playing his first match.

Im and Ancer had all the answers against Cantlay and Schauffele, leading from the eighth hole onward to win, 3 and 2. Behind them, Hideki Matsuyama and C.T. Pan were way too much for Patrick Reed and Webb Simpson, leading throughout in a 5-and-3 triumph to win for a second time together. The U.S. duo slipped to 0-3, and Reed lost for the fifth time in a row in team play dating to last year’s Ryder Cup.

Reed’s caddie, Kessler Karain, was involved in an altercation with a fan shortly after their match ended, and the PGA Tour said in a statement that Karain would not be allowed to caddie for Reed, his brother-in-law, in today’s singles session. A replacement caddie had not yet been named on Saturday night. Reed faces Pan in the third match at 10:24 a.m. local time, 6:24 p.m EST.