In U.S. Women’s Open, Korda sisters finally paired together in a major 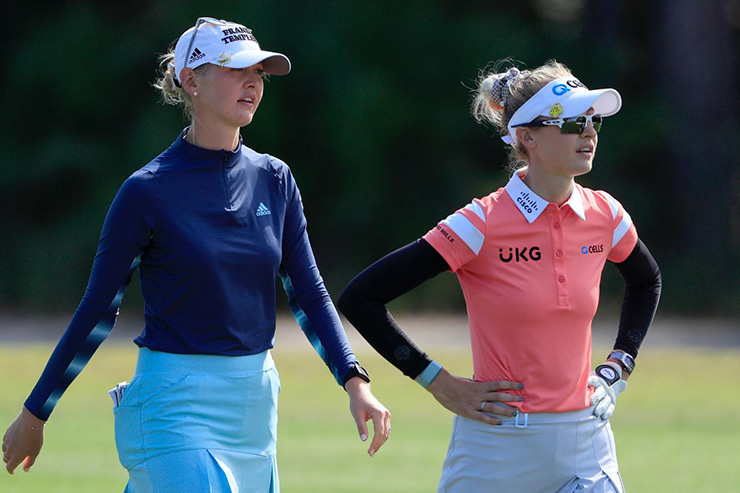 Jessica Korda (left) and sister Nelly Korda will be paired together in the first two rounds of the U.S. Women’s Open. Sam Greenwood

By Tod Leonard
It’s one of those occasions when you wonder, “Why didn’t anybody think of this before?” Remarkably, the Korda sisters of the LPGA Tour, Jessica and Nelly, had never been grouped together in the first round of a women’s major championship. That will change come Thursday, when they will play alongside each other and former U.S. Women’s Open champion So Yeon Ryu in the first round of the U.S. Women’s Open at Olympic Club.

The USGA announced tee times for the first and second rounds on Monday. The Korda group will go off on the Lake Course at 11:28 a.m. ET in the first round. Neither Korda has won a major, with Nelly, 22, who has four LPGA wins, having come closest with a tie for second in the 2020 ANA Inspiration. In her only U.S. Women’s Open start, Nelly tied for 10th in 2018. A six-time winner on the LPGA, Jessica, 28, has top-10 finishes in all five of the LPGA majors, and her best U.S. Women’s Open result is a T-7 in 2013.

In what could be considered a veteran super group, Paula Creamer, the 2010 U.S. Women’s Open titlist, and Cristie Kerr—who are playing on special exemptions offered by the USGA—are grouped with the championship’s 2014 winner, Michelle Wie West.

In another grouping of major champions, Lexi Thompson, Brooke Henderson and this year’s ANA winner, Patty Tavatanakit, will play together.