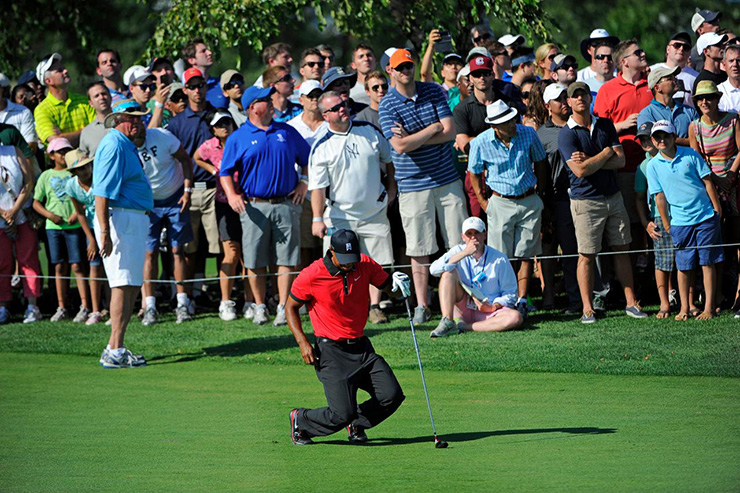 Tiger Woods falls to the ground in pain after hitting his second shot on the 13th hole during the final round of the 2013 Barclays at Liberty National Golf Club. (Chris Condon)

By Daniel Rapaport
Tiger Woods’ April 2017 spinal-fusion surgery will go down as one of the most famous, impactful procedures in sports history. It revived Woods’ career, allowing him to rebound from the ultimate depths of a career that appeared to be over to the mountaintop of winning his 15th major championship at the 2019 Masters.

On Tuesday, fans got a revealing look at Woods’ injury journey thanks to a video released by Centinel Spine. The eight-minute video, layered with tour footage and edited with ultra-high-production value, details the nadir of Woods’ injury struggles: “When I swung a golf club, it felt like I was playing the game bloody knuckles … the uncomfortableness of when you hit your funny bone, how much that hurts … now do that 1,000 times per day and see what that feels like.”

It also gets into the decision process over whether to have the fusion procedure, which Woods viewed as a career-ender before learning more about the surgery. Included is an interview with Dr. Richard G. Guyer, who performed the minimally invasive anterior lumbar inner-body fusion. After the procedure was completed, doctors told Woods to stand up. He was … hesitant.

“You kidding me?” Woods says in the video. “Stand up? You just cut me open. Why do you need me to stand up?

The doctor’s reply, as Woods recalls with a smile: “You’re OK to stand up now, it’s good.” The nerve pain in his right leg, which had plagued him for years, had vanished.

Next came the recovery, and building a golf swing that could compete with the best players in the world without damaging his new body. He was, of course, able to do that, and the video concludes with Woods’ come-from-behind victory at the Masters. A comeback to complete the comeback.

The full video can be seen at rediscovermylife.org/tigerreborn.php