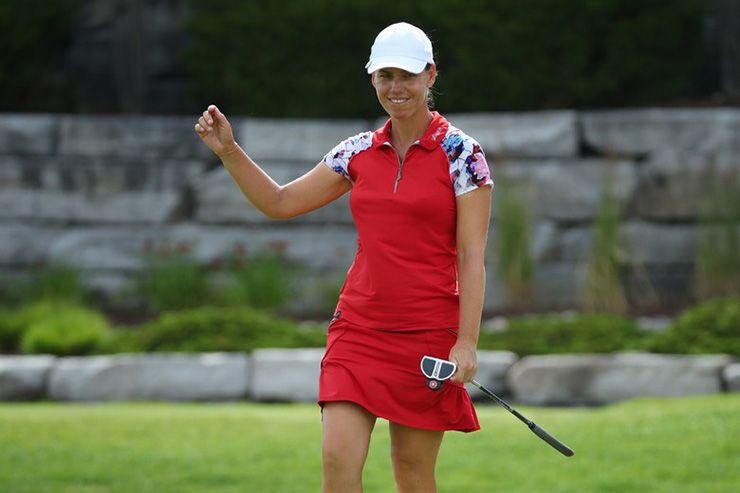 MIDLAND, MICHIGAN – JULY 18: Karine Icher of France reacts to a bride on the 18th green during round two of the Dow Great Lakes Bay Invitational at Midland Country Club on July 18, 2019, in Midland, Michigan. (Photo by Gregory Shamus/Getty Images)

By John Strege
The LPGA Q-Series—or Q School, as it more commonly is called—is a right of passage for those on the front end of careers. But for those at career crossroads, it is pis aller, as LPGA veteran Karine Icher might call it in her native French.

If pis aller sounds ominous, well, it is. It translates to last resort. “If I failed, bye-bye,” Icher said recently. “My plan would have been to find another job. I had no other options.”

Icher, 40 and a resident of Florida, tied for 26th in the eight-round affair that ended last Saturday. She will be fully exempt in 2020, having been the oldest player to qualify in Q School.

But the story behind the story of the clutch performance that will prolong her career is the answer to the question: How did a consistently good player, a four-time member of the European Solheim Cup team who also competed for France in the 2016 Olympics, wind up back in Q School a few months shy of her 41st birthday?

Well, it began with a pregnancy and ended with the LPGA updating its antiquated maternity policy.

In 2017, Icher made the cut in 25 of 28 LPGA starts. She finished in the top 10 three times and earned nearly a half-million dollars. She finished 40th on the money list, the sixth straight season and seventh of eight seasons that she finished 40th or better. The one exception was 2011, when in August of that year she gave birth to daughter Lola.

In 2018, Icher already had played in 12 tournaments when she learned she was pregnant. The maternity policy in place at the time required players to have played in 10 or fewer events to take maternity leave to retain their playing status in the following year.

“I played pregnant for pretty much half the season,” she said. “I didn’t want to give up after 12 events. I talked to the LPGA and said that ‘you should change this. The maternity policy completely sucks.’

“After reviewing everything, they decided to change the maternity policy. Now it’s much more flexible.” But the LPGA did not apply it retroactively, to Icher’s dismay.

Under the new policy, a player can declare her maternity year either the year of the baby’s birth or the following year. Icher would have been able to play as often as she wanted in 2018, then could have declared 2019 her maternity year, and when she resumed playing she would have done so retaining her place on the priority list.

“In July 2018, when I stopped my season for medical [leave], I was not playing well,” she said. She had played 16 tournaments in 2018 and earned $74,155, more than $200,000 short of finishing in the top 80 that would have given her a full exemption for 2019. Her medical leave gave her only seven additional tournament starts in 2019 to earn enough when combined with her 2018 earnings to meet the 2018 money list threshold required to retain her full exemption.

Icher, whose husband Fred Bonnargent caddies for her, gave birth to daughter Maya on Nov. 3, 2018. Three weeks later, she was back in the gym and was soon hitting balls on the range to prepare to play the Bank of Hope Founders Cup in Phoenix last March.

“It was hard,” she said. “Talk to every player who has a child now and they take a year off. I rushed myself to get ready, but mentally it was too much pressure for me. Also, it was my second child. I have an 8-year-old, too. It was a little bit complicated. I left my 4-month baby at home and it was awful. I was missing them and struggling.

Icher missed the cut in six of those seven starts and lost her exempt status. She was still able to enter an additional 12 tournaments via her lower priority ranking in 2019 and made the cut in only six of them. She finished the year with $62,430 in earnings, 127th on the money list.

So her options came down to these: Retire or head back to Q School. Reluctantly, she chose the latter.

“It was hard to go,” she said. “At first I didn’t want to go. Then when I put everything in the balance, what’s two weeks? You put your ego on the side and try to play well and treat it as a regular tournament.

“I just love the sport. I love golf. I want my kids to be part of it later. With my first daughter, I was able to come back quick and get a good result after she was born. For the second one, I didn’t want her to know that I had to stop playing because I was playing bad while expecting her.”

Icher’s experience allowed her to avoid what in her own mind would have been a distasteful potential ending to her career. Instead, she is looking ahead to returning full time to the LPGA, reclaiming her consistency, and again representing France in the Olympic Games.

And when she does eventually end her career, her biography will include an important contribution to the LPGA: She was instrumental in improving its maternity policy.

“At least I’ll have left the tour better than I found it,” she said.