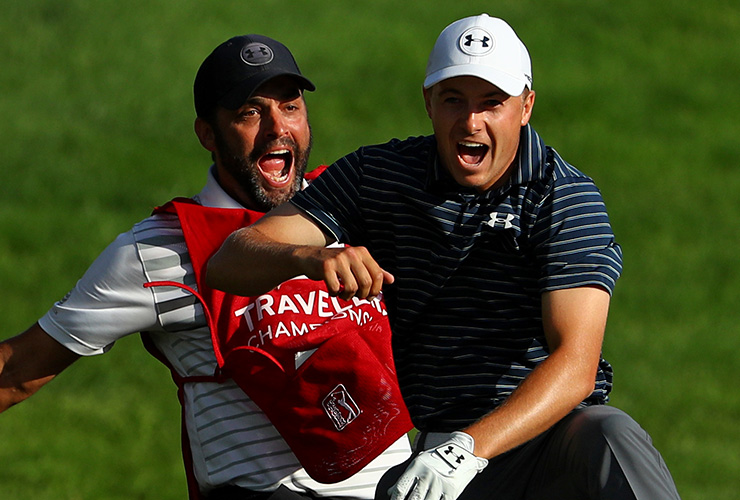 Tiger Woods would have made the putt. Jordan Spieth holed the bunker shot.

Comparing anything to Woods is a futile enterprise, even as Spieth joined him as the only other player in the modern era to have won at least 10 times on the PGA Tour before age 24 following Sunday’s playoff victory over Daniel Berger on the first extra hole at the Travelers Championship.

This is not a comparison to Woods, who had 15 wins by age 24, as much as it as an appreciation for Spieth’s achievement, and the memorable moments that he has compiled along the way. It started at the 2013 John Deere Classic, where he holed a bunker shot on the 72nd hole to reach a three-way playoff that he eventually won on the fifth extra hole, and concluded with his holed-out birdie bunker shot in a playoff to cap his latest wire-to-wire victory. In between came Spieth’s impressive 2015 season, in which he got nearly three-quarters of the way to the calendar Grand Slam.

RELATED: Watch Jordan Spieth pull off the winning shot at the Travelers

“I am not comparing Jordan to Tiger at all, zero,” said good friend Ryan Palmer, who watched the finish in the clubhouse at TPC River Highlands and then from behind the 18th green as he waited to hitch a ride back to Dallas with the eventual champion. “But he has that mentality to do that kind of stuff.

“He has that ‘It’ factor. Not many guys could hit that bunker shot he hit on 18 [in regulation] after he hit that second shot. That was gutsy. The second [bunker shot] was destiny.” 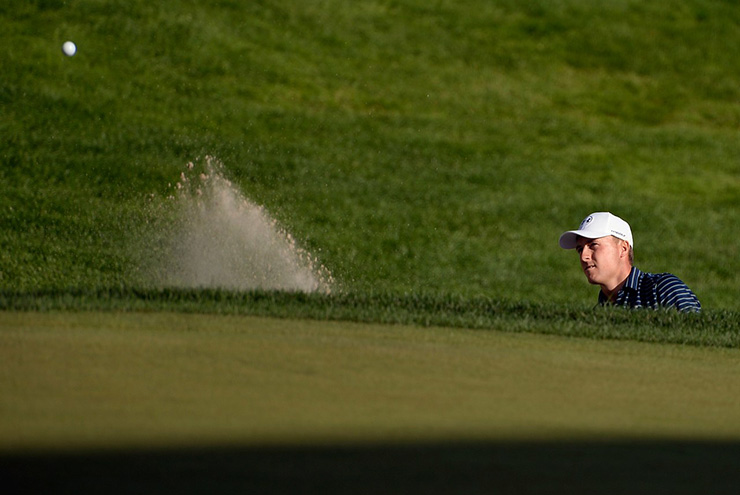 Jordan Spieth birdies from a bunker on the 18th during a playoff in the final round of the 2017 Travelers Championship. (Photo by Jessica Hill/AP)

At one point Sunday, it looked like Spieth would win in a walk after making birdies on the first two holes to extend his overnight lead to three. But with a bogey on the fourth and a string of seven straight pars, he was never able to pull away.

Spieth still led by two going to the back, but his advantage quickly evaporated over a final wild 90 minutes.

Spieth three-putted from 50 feet for bogey on 12, nearly drove into the water on the par-5 13th, before managing to save par, and made another three-putt bogey from 20 feet on 14.

Playing in the group ahead of Spieth, Berger birdied 13 and the reachable par-4 15th to pull even.

Spieth then nearly drove into the water again, his ball somehow stopping on the bank on 15 the way it luckily had on 13. He then got up-and-down for birdie, pouring in a 16-footer he didn’t think had a chance of going in after he hit it to take another one-stroke lead.

Standing in the fairway at 17, Spieth watched as Berger drained an eight-footer for birdie to draw even again. Spieth’s approach barely cleared the water and he two-putted from 20 feet.

With Berger having already made par on 18, Spieth had just 118 yards from the middle of the fairway but came up 10 yards short and landed in the face of the bunker. He needed an up-and-down just to force sudden death.

“I couldn’t have been in a better position with a better club,” Spieth said of his approach. “It just kind of dropped out of the air.”

On the walk to the green, he and caddie Michael Greller didn’t say much. What little conversation there was was straightforward. In a little bit of foreshadowing, Spieth proceeded to nearly holed the shot, sending the ball spinning three feet past the hole before sinking the par try to force overtime and a return to the 18th tee. 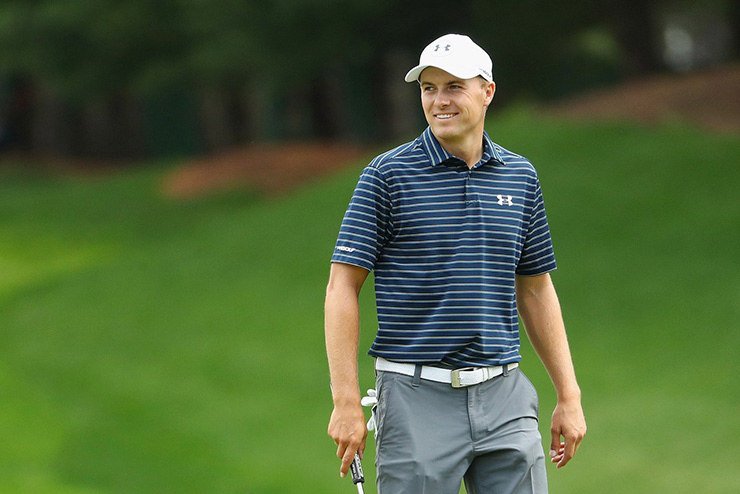 Spieth won the Travelers wire-to-wire, just the third person in the history of the event. (Photo by Maddie Meyer)

As Palmer suggested, the sand shot was gutsy, particularly after having come up so short from the middle of the fairway with his approach.

In the playoff, Berger played first and drove into the left rough. Spieth, trying to power another hard slider like the one in regulation, hit a tree on the left side, his ball kicking back into the fairway but leaving him 230 yards from the hole.

Spieth’s approach found the same bunker as he had in regulation but the shot was more straightforward. Watching from home, good friend Justin Thomas tweeted, “Wouldn’t be surprised if @JordanSpieth just holed this bunker shot.”

He did, the ball rolling into the center of the cup with the speed of a perfect putt.

Spieth and Greller launched into a celebration that would have made baseball’s bat-flipping aficionado Jose Bautista proud, with Spieth slamming down his wedge and Greller sending the rake airborne.

When the raucous scene finally quieted back down, Berger missed his long putt from the back of the green. Game over.

“Hit the tree, kick it out, 5-iron in,” laughed Greller, who kept the rake, saying it would look good in his mancave. “He’s pretty good out of bunkers when it matters, as he’s shown in the past. When he was over [the second bunker shot] I was having flashbacks to Ken Duke, Russell Knox throwing his hat, Kevin Streelman making seven straight birdies. Magic happens here.”

It happened for Woods. It happens for Spieth.

“The first thing you think of is Tiger would’ve made the [shot],” Palmer said. “There’s a reason why two guys have won 10 times by 24.”

Comparing Spieth to Woods isn’t a comparison at all, but there’s a lot of “It” in Spieth, just like there was with Woods.