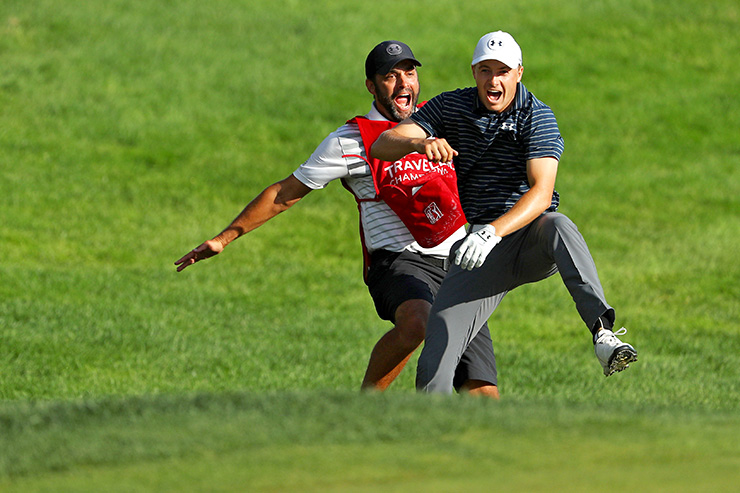 We were treated to a riveting Sunday at the Travelers Championship, and it ended as memorably as any PGA Tour event all season — and with one of the best shots from the highlight-reel career of Jordan Spieth, and by far our favorite reaction from the 23-year-old.

In the first playoff hole at TPC River Highlands against Daniel Berger, Spieth made it adventurous as he hit a tree to the left of the fairway with his tee shot before it ricocheted out into the fairway. With more than 220 yards for his second shot (he had a lob wedge into the green just 20 minutes before in regulation), Spieth found the front right bunker (as he had in regulation). That’s when Spieth made some magic happen.

Afterward, he told CBS’ Peter Kostis: “I don’t know if I’ll ever have a moment like that again.”

The amazing shot, followed by a long birdie miss by Berger, clinched Spieth’s 10th tour victory. He’s the second quickest to that number (23 years, 10 months), just four months behind how quickly Tiger Woods got to 10 wins. Jack Nicklaus was 24 years old when he won his 10th event.

It’s just more spectacular stuff from Spieth, who also holed a bunker shot at the John Deere Classic for his first tour win in 2014. That bunker shot might’ve ran across the entire green if it didn’t hit the pin, whereas Spieth’s walk-off at the Travelers rolled in at a perfect speed for the win.

Of course, making the shot even more awesome is the celebration Spieth has with his caddie, Michael Greller.

As good as the celebration was, equally impressive was Greller’s toss of the rake. Look at that thing fly!

History. ? This guy is good.