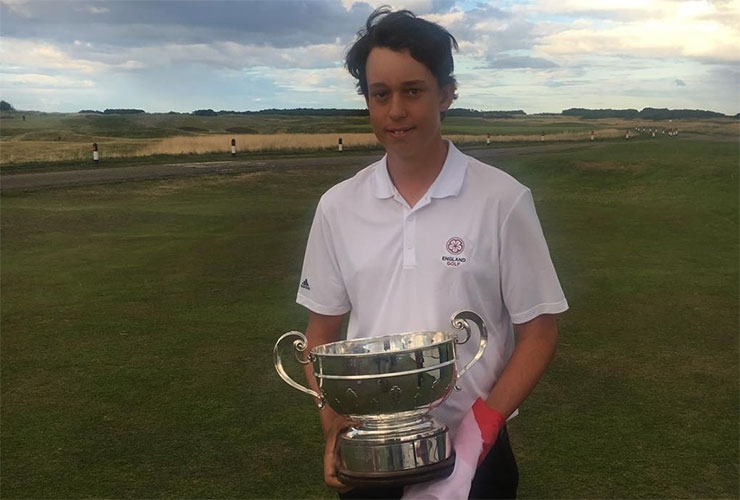 By Kent Gray
Josh Hill has made an impressive start to the Boys Amateur Championship in Ireland, carrying on from where he left off in his dream England debut in Scotland last week.

The 14-year-old Jumeriah Golf Estates star signed for an even par 72 at Portstewart G.C. on Tuesday to earn a share of 11th place in the 252-strong field after the opening round of the U-18 event, rivalled only by the U.S. Junior Am in terms of age-group prestige.

Hill, five shots off the pace set Joesph Pagdin after the Englishman produced a 67 at Portstewart, tees it up in his second round at nearby Royal Portrush at 12.56am (3.56pm UAE time) on Wednesday. He’s well positioned to make the top 64 and matchplay phase which will also be held at Portrush, next year’s Open Championship venue.

Hills only loss came in a foursomes match with teammate Max Hopkins although he more than made amends by finishing five under and two under respectively as he overpowered Welshman Dylan Thomas 5&4 and Ireland’s Charlie Denvir 3&2 for critical singles points.

It’s all over! England sneaked home with a win 8-7! Josh won his match 4&2 (I know it officially said 3&2 but as one can see the last hole was conceded). He was deadly focused and pretty clinical and only produced one mistake! I would consider this a fairly successful week with 3 out of four points won. What a great experience thanks to @england.golf for showing faith in a pretty unknown and untried player and thanks to the whole england management team and players for making @j.hill_golf feel so at home and creating such a memorable experience! @bhsgdubai @jgegolf @jmarshallgolf @faldoseries

“It is such a great feeling to win with all the team. Afterwards we had dinner and walked around town [Dornoch] a long time, you know having a laugh and having fun and it was such a good event to win,” Hill told Golf Digest Middle East.

“It was a great event, one of the best events I’ve ever played, so well set up. They treated you amazingly, it was as if you were playing a pro event. To me the people on the England team, they were so nice, so fun to be around and really funny.

“I felt like we should have won that match [foursomes v Wales] easily but other than that I felt like I played fairly well. It was great to win, especially on my debut.”