Heartbroken Hatton refuses to be ‘too downbeat’ 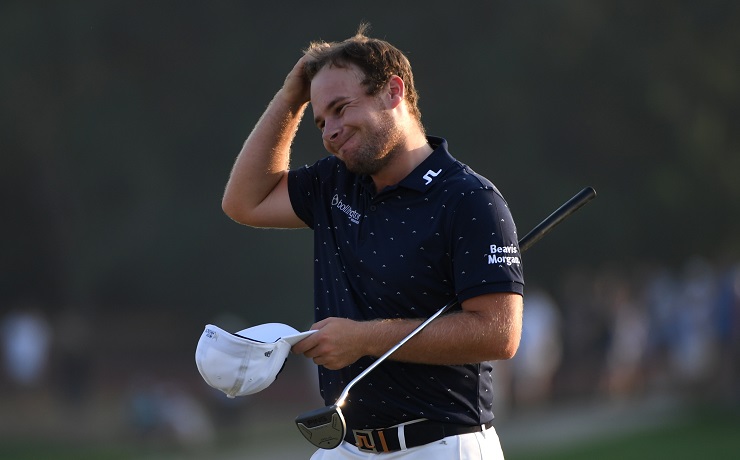 There was angst, embarrassment, ecstasy and agony within the space of four shots for Tyrrell Hatton but the Englishman insists he won’t allow his painful near miss at the DP World Tour Championship linger.

The 25-year-old looked to have pulled off a Houdini-esque escape act – and with it victory in the Race to Dubai decider – when he holed out from the sand for the unlikeliest of pars on Earth’s penultimate hole in the final round Sunday.

Hatton had taken a one shot lead into 17 only to airmail his tee shot into a bunker beyond the pin and find it deeply buried. After failing to escape the beach at his first attempt, he was clearly telepathically linked to a whispering Julian Tutt up in the commentary booth: “Now if the script is right, he holes this.”

Hatton duly obliged to turn a bogey at best into a scarcely believable par, a sandy of sorts that one European Tour staffer tweeted as the “biggest shot of his career”.

Sadly Hatton’s very next swipe proved the biggest disappointment of his golfing life as his drive leaked right and took a one-hop swan dive into the creek splitting Earth’s 18th fairway. For Hatton, it might as well have disappeared into Earth’s core.

Hatton did frighten the cup with his chip from the cabbage on 18 but ultimately missed the par putt coming back, scribbled down a bogey, signed for a 68 and ultimately a -16 total of 272.

Fitzpatrick still had work to do but produced a clutch birdie from the sand to put his autograph on a 67 and a winning 271 total that clearly can’t have been easy for his countryman to contemplate.

Still, Hatton bravely opted to accentuate the positives afterwards, of which 2016 has delivered many including a breakthrough European Tour win at the Alfred Dunhill Links Championship in Scotland last month.

“Obviously it’s a bitter pill to swallow, but it’s been a great week and for me it’s been the best year of my life,” Hatton said.

“So I can’t get too downbeat, these things happen. You know, it is what it is and I’m happy with how the week went. I’m sure hopefully in the future, I’ll take my next chance.”

With €3.23 million banked, not to mention a bonus €456,441 for finishing fourth in the Race to Dubai order of merit standings, 2016 has indeed been memorable for Hatton who has family holidaying in Dubai with him and intended going out to “celebrate tonight no matter what”.

But not before he was among the first to congratulate Fitzpatrick who he described as a “great lad” and the leader of a talented new generation of British players.

“Yeah, it’s exciting moving forward, and hopefully there will be many more occasions like this. There’s a few lads that are doing really well at the moment, as well, and I’m sure in the years to come that we’ll be pushing each other forward.” – Kent Gray