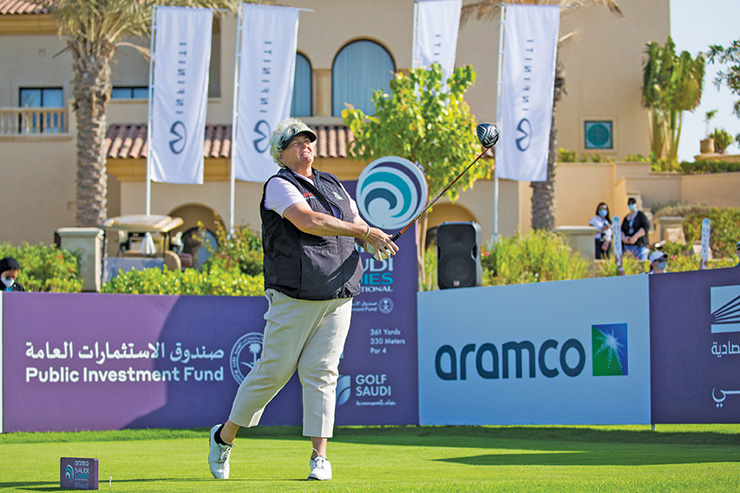 If Dame Laura Davies deserves anything from her World Golf Hall of Fame career it is to be heard and especially so when the subject is the very future of the women’s game.

The 57-year-old Englishwoman might be a prolific champion with 85 wins worldwide but is not prone to hyperbole. All of which made her effusive praise of the Aramco Team Series worthy of repeating after the innovative concept’s debut in London last month.

“The more forward-thinking sponsors we get like this the better,” the four-time major champion said of the Kingdom’s petroleum and natural gas company which is backing the series’ four tournaments in London, Sotogrande (Aug 5-7), New York (Oct 14-16) and King Abdullah Economic City (near Jeddah, Nov 10-12) to the tune of US$4 million.

“They are doing an absolutely cracking job for us. And what they’ll hopefully do is make all the other sponsors move the bar up and realise that 108 pros cannot exist on a €200,000 tournament. I know times are hard and everything, but there’s not much to go round with that kind of prize fund.

“We are not asking every sponsor obviously to put a million euros in – or million dollars as it is this time – but it is just encouraging other sponsors who are doing such a great job.”

“Everything has to be viable – they [sponsors] have to have a tournament that works for them as well as the players. Maybe other sponsors will want to get a bit closer to the Aramcos of this world.”

Owned by Golf Saudi and the Saudi Golf Federation and sanctioned by the Ladies European Tour (LET), the Aramco Team Series sees the LET’s best players and invited LPGA Tour stars team up with an amateur golfers to compete for a $1m prize fund at each venue.

The series employs a NBA-style draft system where selected team captains pick one pro teammate before being allocated a third via a random draw as well as amateur golfer who could end up putting for a major payday for their three professional team-mates. As well as competing for the team trophy, the professionals also vie for an individual title which carries Rolex (World) Rankings and Solheim Cup points, as well as being an integral part of the LET’s season-long Race to Costa del Sol money race. 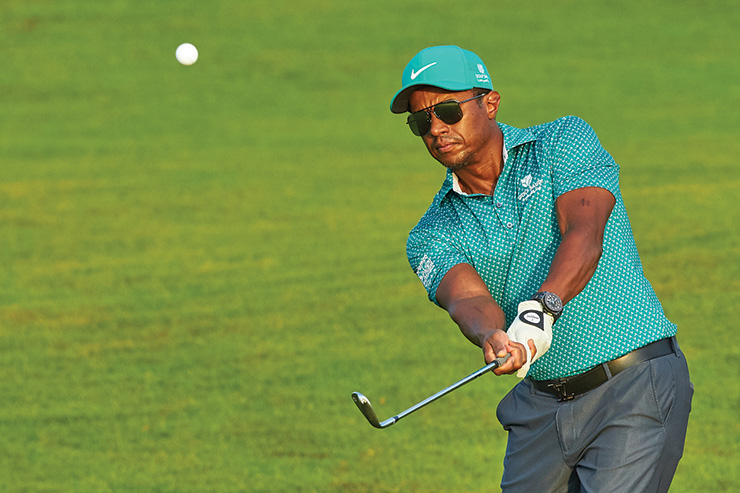 Davies’ comments didn’t go unnoticed by Majed Al Sorour at the Centurion Club. The Golf Saudi CEO is adamant the Aramco Team Series is an important moment for not only golf but women’s sport.

“It’s encouraging to hear these kinds of comments from Laura,” said Al Sorour. “Golf Saudi is a champion of women’s sport and we hope our support of the Aramco Team Series events will make a big difference to the sustainability of women’s golf; something which is aligned to the ongoing women’s sporting movement in Saudi as part of Vision 2030.

“As is the case across global sport, women’s golf really does lag behind the men’s game in terms of prize money and exposure. Aramco’s continued commitment in golf across the next few years can hopefully provide the catalyst for other international backers to invest in the game and change this.

“We truly feel this could be one of the most exciting and innovative event formats in women’s sport today. We’re attracting the biggest names in women’s golf and shaking things up globally with the US sport style ‘draft’ and walk-on music. We’re always trying to innovate and make the game more appealing.”

Enhanced global broadcast coverage is part of Aramco commitment, now the most significant sponsor on the LET.

“The more broadcast exposure we can give women’s sport the better – we’re excited to see the Aramco Team Series being shown in 60 countries over the coming months,” Al Sorour continued.

For the record, German Olivia Cowan captained her foursome to victory in the teams event in London while Norwegian Marianne Skarpnord captured the individual title in a playoff.

JA the Resort Ambassador Cowan led Sarina Schmidt, Diksha Dagar and amateur Andrew Kelsey to victory by three strokes from Team Skarpnord. It was a maiden LET title for Cowan who produced the pivotal shot of the final round, holing out for eagle from 72 metres with her 56 degree wedge to send her team back to the summit of the leaderboard. 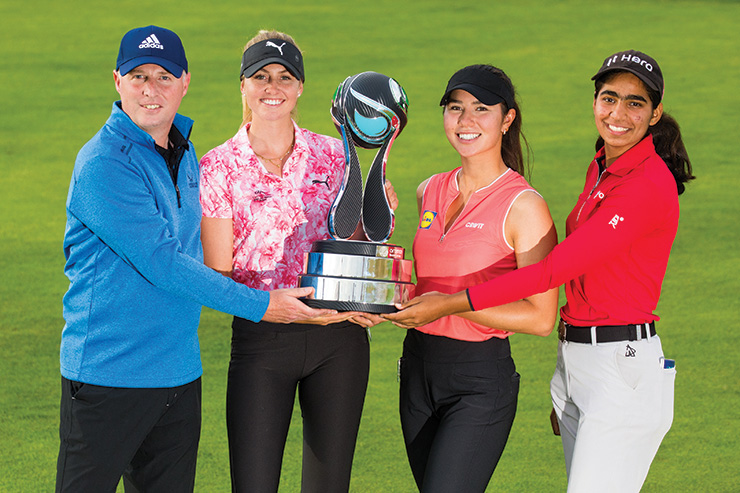 “I can’t put it in words how amazing it is. To share it with one of my best friends is just incredible as well,” Cowan said after selecting Schmidt. “I got really lucky with my team. I knew I wanted to pick Sarina two weeks ago and then to have Diksha on the team as well – I knew she was a great player and that she could hole some putts – so, I knew we had a good chance.

“We all just complemented each other. We were all so great out there – we are a proper team. We weren’t looking out to win the individual, we were going out there as a team to win the team event and that’s paid off.”

Skarpnord’s consolation was victory in the individual event although she was made to work for it after carding a superb closing round of 68 – five-under – to tie Thailand’s Atthaya Thitikul on 13-under-par. 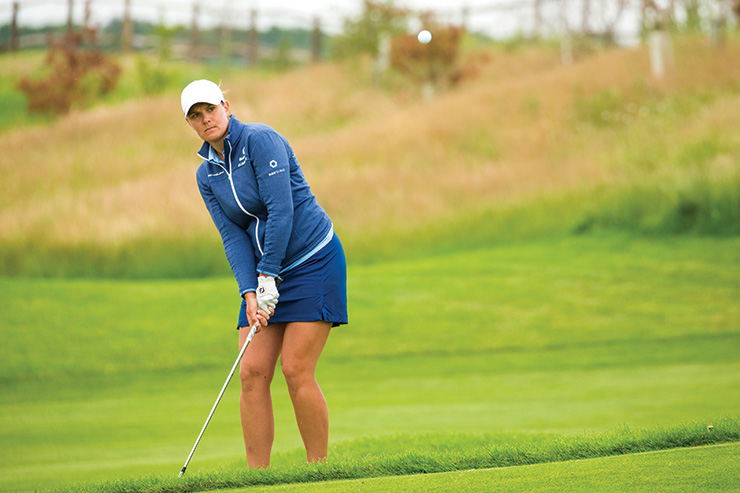 A drained 12ft birdie putt on the Centurion Club’s 18th hole saw the Norwegian clinch her fifth LET title at the first time of calling in sudden death.

“It was won with a lot of nerves,” Skarpnord said afterwards. “On the short putts, my hands were nearly shaking. To win this event is very special. I think this concept is so, so good and we’ve had so much fun this week. I love the format. It’s so much fun when you’re a team and you have to do well for someone else as well, not just yourself.”

The series moves to the La Reserva Club, near Marbella, with a host of European Solheim Cup heroes set to up the ante. In for the three-day event in Sotogrande come Georgia Hall, Charley Hull and Bronte Law, along with their winning 2019 Solheim Cup captain Catriona Matthew. The Scot won’t mind the unique team format as she runs the rule over some key players ahead of September’s rematch with the U.S.

Women’s PGA Championship runner-up and four-time US Solheim Cup player Lizette Salas and Alison Lee will head the American challenge in Spain while Thailand’s Moriya Jutanugarn and Lindsey Weaver, the 2013 and 2018 LPGA Rookies of the Year respectively, are others to watch. Skarpnord is back too and can’t wait to kick on from London.

“It was awesome to win and go down in history as this tournament’s first-ever winner. London was so much fun so I already can’t wait to do it again in Sotogrande next month.

“Events like the Aramco Team Series go to prove that so much great work is being done to elevate women’s golf, so I know the opportunities I have available for these magical moments are only growing, which is fantastic – and great to be a part of.”