It’s golf before love for Sergio Garcia, this week at least 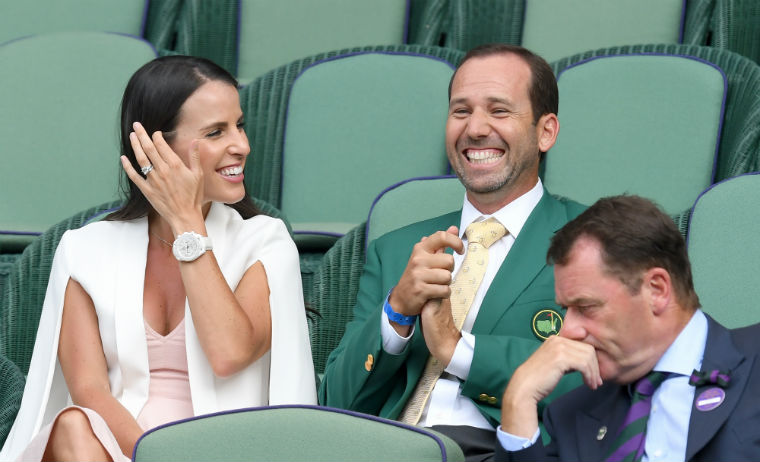 The opening line of questioning was the same for Sergio Garcia as it had been at the Omega Dubai Desert Classic in the New Year.

With your wedding coming up El Niño, is there any chance you might have nervously taken your eyes off the big prize at Royal Birkdale by any chance?

As it was in February, the 37-year-old shrugged off the whacky assumption that tying the knot with former Golf Channel reporter Angela Akins next week might somehow rob him of his golf mojo on the eve of the 146th Open Championship.

“No, [my mind] it’s on The Open, don’t worry,” Garcia ensured his friends in the media. “It’s going to be where it has to be this week. Angela has been doing a great job of getting everything ready for the wedding.

“Obviously we’re really excited for next week. But we have something that we’re also extremely excited about this week, and we want to be here giving everything we have and hopefully, like I said before, with a chance on Sunday, it would be great.”

History will show that Garcia also brushed off the prying relationship questions in Dubai, coolly holding off the Iceman, Henrik Stenson, to win the Desert Classic by three shots. By April, he was Masters champion and there seems now no reason why he can’t add a Claret Jug to his Green Jacket.

This will be the Spaniard’s 21st Open, his third on the famed Southport links and he comes into the week having not missed a cut all year and finishing second in his last start at the BMW International Open in Germany.

So, does winning the Masters make it that little bit easier to claim golf’s oldest major trophy?

“I don’t know, they’re all kind of – I don’t know how you say it – rhetorical questions. It’s difficult to say because obviously winning the Masters was amazing and it does give you a little bit of extra confidence, and I’ve been having a very solid year. So all of those things are great. But every week is different, and you don’t know how you’re going to feel when you go out there on the course.

“So obviously I am excited about it. I am confident about my possibilities, but I can’t tell you if I’m going to be right up there on Sunday with a chance. I’m hoping that I will be but unfortunately it doesn’t work like that every week.”

Okay then, which would you cherish more, the sports coat or the Claret Jug?

“At the moment the Green Jacket means more, because I have it, but everybody knows how much I love The Open Championship. And I would love to at least have one of them before I kind of hang up the boots.

“So definitely it’s something that I would like to achieve. And we’re going to give it a shot this week. But that’s like saying, who do you love more, your dad or your mom? So it’s a difficult question to answer.”

Garcia has 10 top 10 finishes in The Open and has placed no worse than T6 in the past three years. That included a runner-up medal at Royal Liverpool to Rory McIlroy in 2014, his second near miss after losing a four-hole playoff to Padraig Harrington at Carnoustie in 2007.

“I‘ve always said that one of the things that — obviously loving the tournament, itself, and I get so pumped up with the crowds and the kind of golf we have to play here, it obviously helps out. That consistency is one of my greatest attributes throughout my career. Of course I could have won more, but I think the consistency I’ve had for the last 18 or 19 years, is not that easy to do. And I think some people overlook that.

“So that’s pretty much [what Garcia is looking for], more of the same that I’ve been able to do in a lot of majors and at The Open. Hopefully I can make that even better this week.

“So obviously all depending on weather. But it is a solid golf course and I’ve managed to play the ’98 and 2008, I think it was. So it is a golf course that I like. But we’ll see how it plays throughout the week.” — Kent Gray travelled to The Open with Etihad Airways