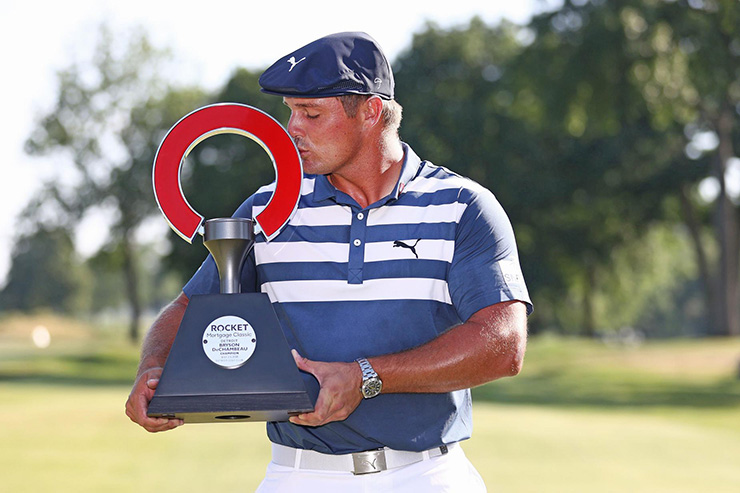 By Joel Beall
The present belongs to Bryson DeChambeau. Mostly because he is bludgeoning golf courses into submission. Partly for all the affirmation, he’s receiving, from his colleagues and himself. And, slightly, from the fact that he is no stranger to confrontation.

Whether a bulked-up Bryson is a true force of disruption is a separate conversation; that focus is on the future and a movement, which will play out in weeks and months and years to come. Our gaze is on the moment, and the man. In this moment, the man is endlessly fascinating, no matter the inflexion with which that word is conveyed. DeChambeau is his own self, an original character.

And that singularity might be the one thing he has in common with the rest of the sport.

DeChambeau’s journey may seem divergent from conventionality, and in some ways it is. But in truth, golf is experiencing—and enjoying—an era of individuality. Yes, it is by its very definition an individual pursuit, yet one of its criticisms over the last two decades (if not longer) is a sense of player sameness at the professional level. There have been colourful personalities throughout the years, but they were outliers in a game whose ethos was one of conformity.

By contrast, modern tour stars’ identities, like a DeChambeau drive in relation to his fellow competitors, could not be farther apart.

The change has been brewing for some time. At a macro level, the tour’s youth revolution has played its part, “Millennials” emboldened by their generation’s belief that distinction should be celebrated. The growth of social media—a platform spurred by the desire for personal attention—can’t be discounted, nor the evolution witnessed in all professional sports where the individual’s importance is no longer dwarfed by a team or league. Players have the freedom, and the resources, to be seen and heard.

Of course, conditions can be right for a fire but there still needs to be a spark. And while DeChambeau personifies particularity, he’s just the latest log in the flames.

The genesis can be traced to Rory McIlroy. Tiger Woods was, is, the bigger star. But Tiger’s star was so vivid it kept others at bay, fans knowing for so long just the player and not the person. From a young age, McIlroy was more approachable, more apt to speak his mind, and more willing to be vulnerable than the previous generation of big names, laying the foundation for the current under-35 crowd to be themselves.

The simple through-line is that Rory begets Jordan Spieth and Justin Thomas, two inquisitive and bright attractions who are superstars yet ordinary all at once. But it is not so much a linear progression as it is a tree structure, whose branches sprouted fan-forward entities like Spieth and Rickie Fowler as well as “I’m going to be me, everyone else be damned” figures like Bubba Watson and Patrick Reed. It also flowered those with an entrenched love for the sport (Thomas, DeChambeau), and ambivalence towards it (Brooks Koepka), each style managing to thrive. Patrick Cantlay can be ultra-serious and Phil Mickelson can be ultra goofy, and both are welcomed. In fact, where Mickelson and his outsized personality rubbed many peers the wrong way during his 20s and 30s, it’s given him new life in his 40s and (now) 50s. Even Woods has embraced this way, letting his guard down and fans in, and the sport is better for it.

Better yet, golf had historically centred its attention on just the top half dozen or so players. By embracing individuality, there’s now a light on those who in years past would only be known to the most zealous. Forget that he’s an NCAA champ and PGA Tour winner; Max Homa’s levered his Twitter handle to become a celebrity. Ditto Eddie Pepperell, and to a lesser extent Harry Higgs. You no longer have to own a major to be a household name.

There are downsides. This concept is so alluring that the powers that be—including the media—can force a narrative that’s not there. Names who become names off marketing and commercials alone, only to cut open the proverbial cake and find the desert is simply icing on cardboard. Personalities can begin to feel cultivated with a brand in mind. It is a slippery slope.

Conversely, the good does outweigh the bad. As much as we love the sport, it is, ultimately, week-to-week theatre at the professional level. A show is only as good as its lead performers, yet a deeper cast—and knowledge of them—adds to richer story.

So yes, Bryson is quite the character. One of many the tour is blessed with at the moment.