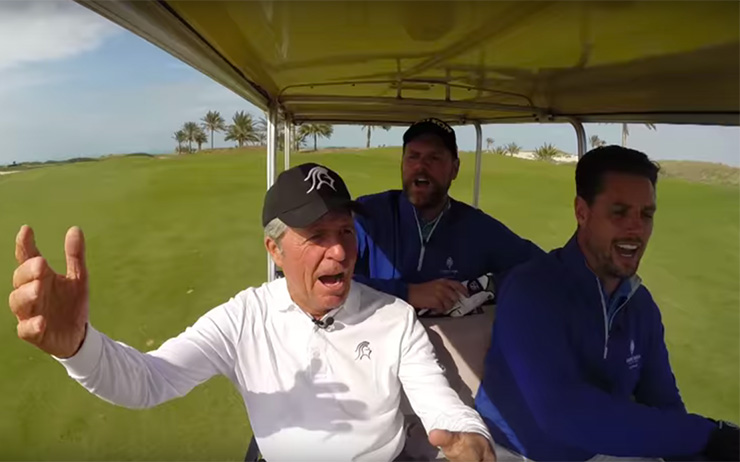 We all know Gary Player has game – nine majors, nine senior bigs and a Champions Tour win in the U.S. at the age of 63 count among his 165 victories worldwide. We also know he can talk a good game and loves to do so, especially if the subject is golf’s future or anything related fitness.

What we didn’t know is that Player can hold a tune, until now that is. We shouldn’t have been surprised.

The cartpool karaoke was shot on the sidelines of his Gary Player Invitational at Saadiyat Beach Golf Club earlier this week, a charity Pro-Am that added US$50,000 to the more than $62 million The Player Foundation has already raised for charities worldwide.

How about former Sprinkbok captain Victor Matfield doing his best Kenny Rogers impersonation and in Afrikans too?

As a golf futurist, Player, loves the European Tour’s initiative to introduce players onto the tee with music, as he told Sport’s Tonight’s Chris McHardy recently.

“Everybody loves music and golf has got to do things that people love. What better way to start your round than with a great song that you love,” Player told Dubai Eye 103.8

And what would your entrance song be, Mr. Player?

“I’d play Barry White’s ‘You’re my first, my last and my everything’. Every golfer should have a choice of a kind of song. And when I get on the tee I should be able to pick a lady out of the gallery and have a quick dance with her [laughs].

With his insatiable appetite for the golfing life, and music it seems, we have no doubt the World Golf Hall of Famer will reach his goal of raising $100 million by 2025 via his Pro-Am series (Abu Dhabi was the first of six events worldwide this year).

Now that would be something to really sing and dance about.