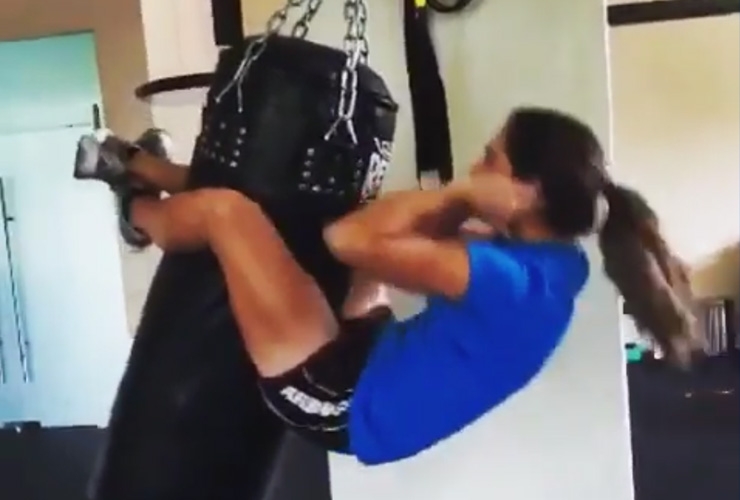 By Alex Myers
Welcome to another edition of The Grind where we have conflicting feelings about watching “The Last Dance” considering all the childhood trauma Michael Jordan’s Bulls inflicted on me and my New York Knicks as a kid. As fire as that Sirius song the Bulls used for their intros is, it still triggers nightmares of 1992 and 1996 and (gulp) 1993. But Charles Smith (sigh) memories aside, the new/old footage is fantastic—and so are the golf stories. Like MJ scoring 63 on the Celtics in the 1986 Playoffs after losing to Danny Ainge on the course the day before. Or MJ buying a rookie Scottie Pippen golf clubs just so he could take all his money.

Scottie Pippen says Michael Jordan gave him a set of golf clubs as a rookie to “lure me in so he could take all my money.” Classic. #TheLastDance pic.twitter.com/Bgd4SZvuEt

Jordan! What a savage. On second thought, I’m definitely going to keep watching because this docuseries is a content factory. In any event, let’s examine what else is (still) happening in the world of golf.

A June PGA Tour restart: At least, we’re buying its potential. The PGA Tour’s bold adjusted schedule seems extremely tentative at this point—especially because the European Tour continues to cancel events and has no timetable for a return—but it’s nice to have some positive news to report for a change. If all goes as planned, the season would restart at Colonial on June 11 and run all the way through a Labor Day Weekend Tour Championship for a total of 36 events in 2019-2020. The first four events wouldn’t have fans and there would only be one major (the PGA Championship in August) technically played this season and six next season, but who really cares? Golf would be back! Fingers crossed this all actually happens. There’s only so many possible Michael Jordan golf gambling stories to write about.

Alex Cejka: But there is still mini-tour news to report. This one-time PGA Tour winner and four-time European Tour winner is now a one-time winner on the Outlaw Tour after winning something called the Arrowhead Classic. Talk about a ringer. We’re guessing the $5,000 first-place check didn’t do much for a man who has about $20 million in career earnings around the world, but it looks like he’s keeping his game sharp. Cejka turns 50 in December so who knows? He could be senior tour eligible by the time play resumes.

Dinner at Tiger’s: Apparently, when you get invited to dinner at Tiger Woods’ house, bring a bat instead of a bottle of wine. As Justin Thomas told it on “Tiger Tales,” Woods and his son like playing home run derby in the living room after they eat. Yep, the living room.

This invention: Kudos to Georgia’s Cobblestone Golf Course for coming up with a creative way to combat the spread of COVID-19:

Check out the new EZ Lift ball retrievers that we have installed on all flagsticks. No need to ever touch the flagstick again! pic.twitter.com/h5oKyXQME5

Pretty slick. And pretty good for the back as well. I hope whoever invented this filed for a patent.

A Ryder Cup with no fans: Playing regular PGA Tour events without fans? Fine. I’d even be OK with major championships being contested this way. But the Ryder Cup? That’s a different animal altogether. The ELECTRIC atmosphere is what makes this biennial event so, well, ELECTRIC. How can you not have the absurdly large grandstands around the first tee packed with people? Or the incessant “Ole, ole, ole, ole! Ole, ole!” chants? Or the player song parodies? OK, so we could do without the last part, but you get the point. If this is how it’s going to be, let’s just punt to next year instead. Because if I can’t hear European golf writers bitch about how crude American crowds are toward the Euros, then what are we even doing here?

John Daly’s Coronavirus “cure”: In a video that we won’t share, the two-time major champ jokes(?) about drinking a bottle of vodka per day to help get “over this thing” really soon. “And that’s the way you kill this coronavirus I believe,” he adds. Hmm. It should be noted the World Health Organization says alcohol may actually put people at increased risk of contracting the coronavirus. Of course, it also should be noted that John Daly is not a doctor.

Tiger’s taste in gum: A year ago, golf’s biggest mystery was what gum Tiger Woods chewed on his way to his epic fifth Masters win. And now, we finally seem to have the answer and it’s not Big Red! Instead, Woods said during a recent fan Q&A with GOLFTV that he and caddie Joe LaCava like to chew on “orange Trident”:

What gum is @TigerWoods always chewing in competition? 🤔

We believe he means Trident Tropical, which is decent, but it’s no Trident watermelon. Or Bubbalicious watermelon. Or, really, any watermelon-flavoured. Or Big League Chew, which apparently makes a watermelon flavour now as well. That definitely wasn’t around when I was a kid. Man, we had it rough, huh? Anyway, Tiger, there are plenty of options out there. Then again, if you won the Masters chomping on this, maybe you should, um, stick with what’s working.

This week would have been the Zurich Classic of New Orleans, AKA that team event on the PGA Tour where Brooks Koepka usually invites his brother. This had become a fun one since switching to twosomes in 2017. Oh well, there’s always next year. We think.

Random tournament fact: Billy Horschel is the only player to win the Zurich Classic as both an individual and team event. Talk about a guy who is great at working alone and with others.

—Brooks and Bryson will team up at next year’s Zurich: 1 MILLION-to-1 odds
—My local courses will add some sort of flagstick contraption: Even odds
—More people will be chewing Trident Tropical on courses everywhere: LOCK

Thanks to Brenda Calcavecchia for sharing this (NSFW) scorecard from her husband Mark’s win at the 2007 PODS Championship (AKA the Valspar now):

This is a look into what I have been dealing with the past 20 yrs. The first day of pods he told me to pack up everything and be ready to go as soon as he was done. If you look closely before he signed his name he wrote “I fucking suck”. He ended up winning that week pic.twitter.com/zloGYLVgRV

Mark is certainly not the first or last golfer to write that on a scorecard. We’re guessing he’s the only one to go on to win a PGA Tour event that week, though. Good stuff.

How about Rocco Mediate looking like any other guy on the range at your local course?

And yet he almost took down Tiger Woods at a U.S. Open. Golf. . . what a great sport!

Or really, trick-shot video of the month. We’ve seen some impressive ones during #QuarantineSZN, but this won GOLFTV’s Lockdown Trick Shot bracket:

The votes are in and you guys have chosen “the ring shot” as the winner of our #BestLockdownTrickShot bracket. pic.twitter.com/FPOt9Trj2h

And for good reason.

THIS WEEK IN TOUR PROS BEING QUARANTINED

Gaby Lopez misses going to the gym so much she shared an old workout video:

I need some of thissss ‼️ Can gyms please reopen⁉️ @lilialvarezsalum1 compañera!!! 🤣😅

Lee Westwood has created his own gym and is posting shirtless workout videos:

All kidding aside, Lee looks pretty jacked. And I don’t care if that’s an old video from Gaby, that’s mighty impressive. And probably not covered in 8 Minute Abs.

“Well, seagulls are known for flying around and sh–ing on people . . . so I am a seagull. I fly around and drop sh– on people. And it usually makes them laugh or sometimes is pisses them off. It all depends on what mood you’re in.” — Charley Hoffman to SiriusXM PGA Tour Radio on why his nickname is “Seagull.” Love it.

This week’s Golf Digest Podcast guest is Erik van Rooyen, an interview recorded before the start of the Players Championship. So about 13 years ago in Quarantine Time. . . .

Congrats to Tim Finchem, who did a great job as PGA Tour commissioner, for being the latest selection into the World Golf Hall of Fame. Of course, he also had great timing with Tiger Woods coming along. . . . Speaking of Tiger, how about this stat our Ryan Herrington dug up? Woods has won more than 40 per cent of possible prize money seven times in his career and is on pace to do it again this season. Tom Watson is the only other player to do this even once in the past 40 years—and he did it 40 years ago. Tiger! GOAT! . . . And finally, I’m on a big Wheat Thins kick of late: 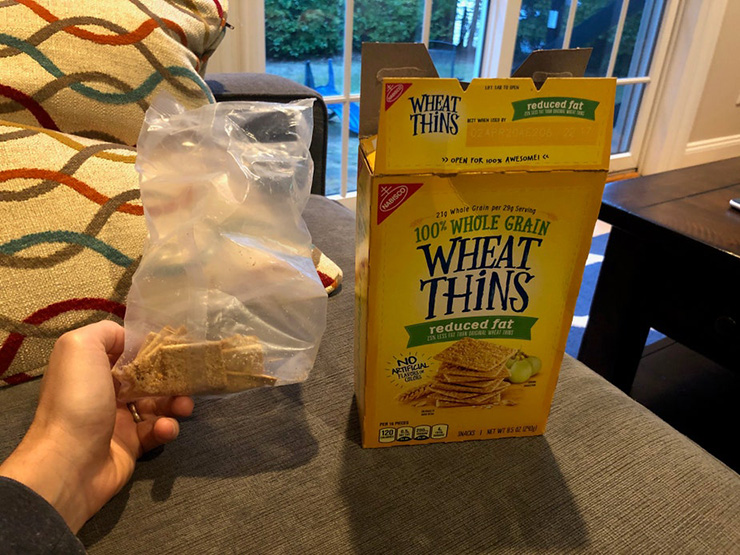 That’s the undisputed GOAT of crackers in my book.

Who is the “Seagull” of the Golf Digest office?
What was Michael Joran’s go-to gum on the basketball court?
What are Michael Jordan’s career earnings on the golf course?