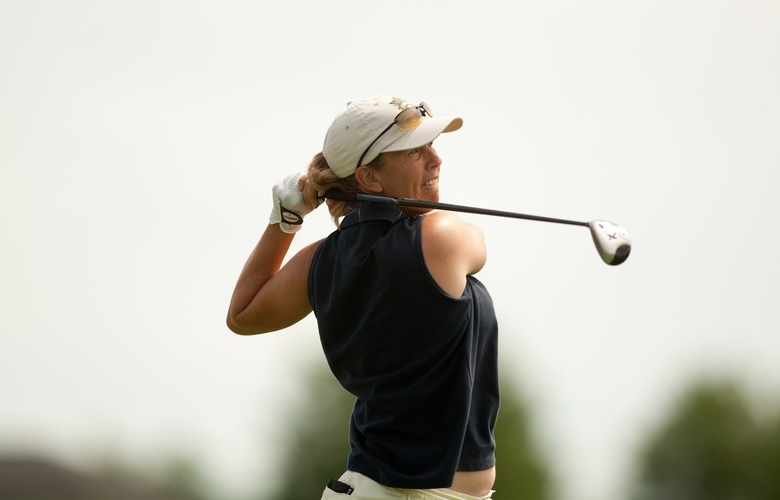 By Alex Myers
There was a “58 watch” at the Senior LPGA Championship earlier this week. It just wasn’t the kind you might expect.

Lee Ann Walker was assessed 58 penalty strokes after it was discovered she had violated Rule 10.2b several times over the course of the first two rounds at the senior major being played at the Pete Dye Course in French Lick, Ind. Implemented earlier this year, the rule prohibits caddies from lining up golfers on putting greens, among other spots on the course. And as Walker found out, there is no limit to the amount of penalty strokes a player can incur for breaking it.

In a statement released by the Senior LPGA Championship Rules Committee, the decision came after Walker notified a rules official during the second round on Tuesday that she had been violating the rule. Obviously, Walker didn’t realize this until it was pointed out to her by another caddie on her fifth hole. Walker then went through her round to that point as well as the first round on Monday to determine just how many times she broke the rule. Considering the total, she was obviously being lined up by her caddie on most putts.

Of the 58 total penalty strokes, 42 were added to her first-round score, changing it to 127. Here’s a look at her crazy scorecard from Monday:

The 16 added to Round 2 brought Tuesday’s score to 90, leaving her at 73 over for two days, 39 strokes behind the next-worst score.

Walker isn’t the first victim of Rule 10.2b. In January, Haotong Li was given a two-shot penalty on the final hole of the Omega Dubai Desert Classic, which cost him $100,000. The next month, the USGA and R&A released a joint statement regarding the rule after players complained. Golf’s governing bodies clarified the caddie has to be deliberately standing behind a player when he or she begins taking a stance.

Walker was not disqualified for signing an incorrect scorecard after her first-round because she was unaware of any rules infraction (Rule 3.3b). “With that, the Committee had Lee Ann re-create the number of times this infraction occurred during both the first and second rounds, and her scorecards were adjusted accordingly,” according to the statement.

On the bright side (maybe?), even without the penalty strokes, Walker wouldn’t have made the two-day cut with scores of 85 and 74 on the difficult track.

UPDATE: Walker provided more details about the bizarre situation to Doug Ferguson of Associated Press on Wednesday afternoon. She says her playing partners on Day 2—Laura Baugh and Laura Shanahan Rowe—pointed out the mistake that had gone unnoticed by two players on Day 1.

“They made me aware of it on 14 or 15 [her fifth or sixth hole of the day], and I called a rules official to ask what to do,” said Walker, who last played on the LPGA Tour in 2008 and currently works in real estate. “They had me continue playing so they could have a conference on the violation and what I needed to do.”

Walker says she was aware of some of the new rules, but obviously not this one.

“What can you do at that point?” Walker said. “It was my fault for not knowing the rules. I don’t have anyone to blame but myself. Big lesson learned.”

Helen Alfredsson wound up winning the event by three shots over Inkster. The Swede also won the U.S. Senior Women’s Open in May. But after the tournament’s conclusion, most of the attention was still on Walker.

“I may have made the Guinness Book of World Records,” Walker said.