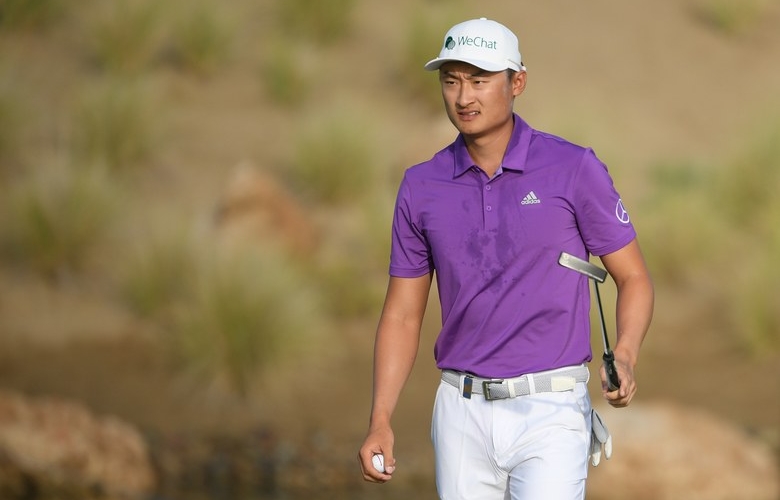 By Joel Beall
The latest iteration of the Rules of Golf, which went into effect Jan. 1, have received a mostly positive reception in the rollout, save for one new guideline—Rule 10.2b(4): Restriction on Caddie Standing Behind Player. As was originally constructed, the rule specified that from the time a player “begins to take a stance for the stroke” until the stroke is made, a caddie “must not deliberately stand on or close to an extension of the line of play behind the ball for any reason.” This item has drawn ridicule in consecutive weeks on the European and PGA Tours.

Haotong Li was the first high-profile victim at the Omega Dubai Desert Classic. A European Tour rules official deemed Li’s caddie in violation of the rule on the final hole of the tournament, and the two-stroke penalty cost Li close to $100,000. Video replay, however, put this penalty into question, as Li did not appear to be into his stance when the penalty was assessed. It led European Tour CEO Keith Pelley to call out the R&A for the rule, remarking it was “grossly unfair.” For its part, the R&A stood by the new rule, asserting there is “no discretionary element to the rule precisely so that it is easier to understand and can be applied consistently.”

The following week, Denny McCarthy received the same penalty at the Waste Management Phoenix Open, this time while playing a shot into a green. Again, the video evidence was damning, with a host of players, led by Justin Thomas, expressing their anger with the new rule. The outcry was so deafening that the PGA Tour took an almost unprecedented step and rescinded the penalty the following day. This time, a governing body heard the message loud and clear, and the USGA promised to revisit the rule with the R&A and provide further resolution.

Which came to pass on Wednesday, as the USGA and R&A have released a follow-up on the controversial new rule.

“The purpose of Rule 10.2 is to reinforce the fundamental challenge of making a stroke and to limit the advice and other help a player may receive during a round,” the entities said in a statement. “Rule 10.2b(4) ensures that aiming at the intended target is a challenge that the player must overcome alone.”

Meaning of “Begins Taking a Stance for the Stroke”: If a player backs away from a stance, the player is not considered to have begun “a stance for the stroke.” Therefore, a player can now back away from his or her stance anywhere on the course and avoid a breach of Rule 10.2b(4) if the caddie had been standing in a location behind the ball.

Examples of When a Caddie is Not “Deliberately” Standing Behind the Ball When a Player Begins Taking Stance for Stroke: As written, the Rule does not apply if a caddie is not deliberately standing behind a player. It is clarified that the term “deliberately” requires a caddie to be aware that 1) the player is beginning to take a stance for the stroke to be played and 2) he or she (the caddie) is standing on or close to an extension of the line of play behind the ball. Several examples are given in the clarification to provide additional guidance.

While this added information does vindicate McCarthy, Li is not so fortunate. Golf Digest sent a reply to the R&A asking if Li would still be penalized under the clarifications, to which an R&A spokesperson confirmed he would.

With the new rules still being digested, both the USGA and R&A urged for patience and further communication.

“Experience has taught us that introducing a new rule requires us to balance patience with a willingness to act quickly when necessary,” said Thomas Pagel, USGA senior managing director of governance. “With so many pivotal changes to the rules this year, we’ve committed to offering any assistance needed in making the rules easier to understand and apply, without taking away the inherent challenge of playing the game. We appreciate that everyone involved in drafting these clarifications worked together with this same goal in mind.”