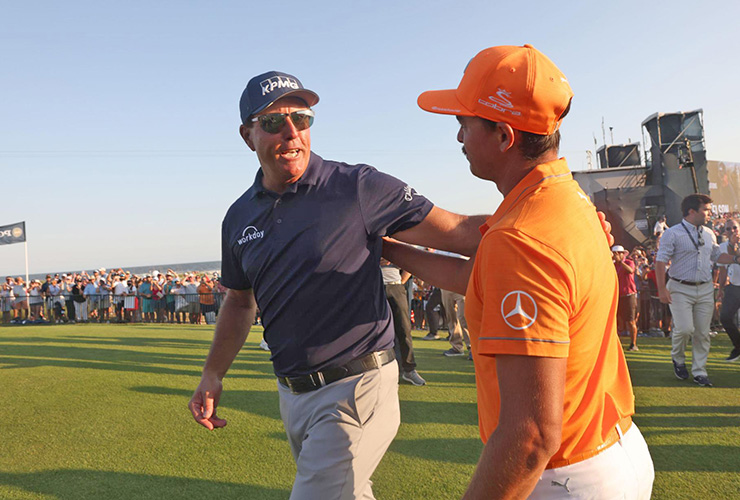 By John Feinstein
There were all sorts of sights and sounds worth savouring in the aftermath of Phil Mickelson’s stunning victory Sunday in the PGA Championship on Kiawah Island’s Ocean Course.

There were the fans running amok after security completely lost control as Mickelson and Brooks Koepka tried to reach the 18th green. There was Mickelson setting a record that will never be broken for thumbs-up gestures, seemingly wanting to give one to every single fan who screeched his name.

But there was one other sight that few would find remarkable that was, in fact, so if you know Mickelson’s long history as a professional golfer: It was his fellow pros lining up to congratulate him and hug him as he made the walk from the final green to the scoring tent.

One after another, players who had wrapped up their rounds earlier in the day and had waited around for the finish, shook hands and hugged the new old champion to let him know how happy they were for him.

Once upon a time, players on the PGA Tour were quickly down the road on Sunday afternoon, wanting to get on their way home as soon as possible. That’s changed in recent years, notably with guys like Rickie Fowler, Justin Thomas and Jordan Spieth.

MORE: How Phil Mickelson defied his age to make history at the PGA

Truly inspirational to see @PhilMickelson do it again at 50 years of age. Congrats!!!!!!!

Others jumped in with similar messages.

On the face of it, none of this is surprising. Mickelson had just become the oldest major champion in history—surpassing the record held by Julius Boros for almost 53 years. He’d won a major at a time when it seemed as if his future tournament wins would come on the 50-and-older tour, where he’s already won twice.

But if you were around when Mickelson, the prodigy, first turned pro after winning a PGA Tour event while still a college golfer at ASU, you might look at the outpouring of love with a good deal of surprise.

MORE: Phil Mickelson made history by staying true to himself

Mickelson was a corporate powerhouse almost from the minute he arrived on tour—which was more than four years before Woods showed up and pushed everyone else into the background. Mickelson had the win in Tucson. He was good-looking with a ready and easy smile. He signed more autographs than anyone since Arnold Palmer. And he played the game left-handed, even though he was actually right-handed and learned to swing a club left-handed while mirroring his dad. That made him easy to identify at all times and allowed him to acquire the remarkably clever nickname, “Lefty.” He was popular with the media and quickly beloved by fans.

That was not, however, always the case in the locker room. In his early years on tour, his nickname was “Eddie Haskell,” in honor of the character on the old “Leave It To Beaver” TV show who always charmed Beaver’s mom and dad, only to convince Beaver and older brother Wally to find trouble.

Many players rolled their eyes when Mickelson’s autograph-signing came up. There have been very few days since Mickelson came on tour 29 years ago that he hasn’t spent 45 minutes signing autographs. Having witnessed it, I can tell you he always did it with good humor; looked people—especially kids—in the eye and conversed with them as if they were good friends.

In the locker room the refrain was: He just does that to market himself. Perhaps. But Mickelson’s longtime caddie Jim “Bones” Mackay always had a simple answer for those who said that: “Do you think the little kid walking away with the autograph could care less WHY Phil signed?”

Mickelson knew players whispered about him and, in many cases, were flat out jealous of how much money he was making away from the golf course. I had a long talk with Mickelson about his public image versus his locker-room image standing on the putting green at Troon prior to the 1997 Open Championship.

“I understand how guys feel,” he said that day. “I know there are guys who think I’m aloof because I don’t hang out a lot in the locker room. But you have to understand Amy [his wife] and I are 24/7. We enjoy being with one another. She’s my best friend. It isn’t that I don’t like the guys. I just like her better.” 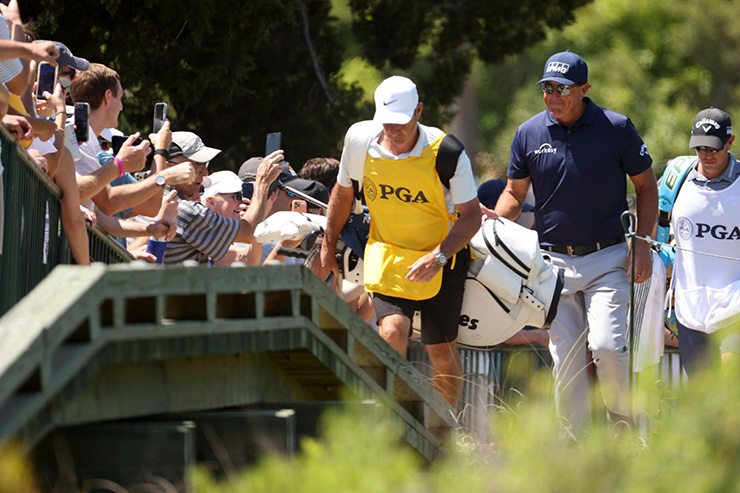 There was no question the crowds were pulling for a Mickelson win on Sunday at Kiawah. Jamie Squire

That was the honest streak in Mickelson, one that came out more and more as he got older and became less concerned with keeping his corporate sponsors happy.

He won 22 times on tour before his breakthrough victory at the Masters in 2004. To his credit, prior to that dramatic win at Augusta, he never fell back on the old, “I’ll have had a great career if I never win a major,” cop-out. He always said he wouldn’t feel complete as a player until he won a major. Just as now he readily admits he’ll regret never having won a U.S. Open if he walks away from that championship with six-second places and no victories.

It isn’t as if Mickelson hasn’t had embarrassing moments on the golf course and off. There was the meltdown on the 72nd hole in 2006 at Winged Foot that cost him, arguably, his best chance to win a U.S. Open. “I’m such an idiot,” he said afterwards.

There was also his inexcusable behaviour at Shinnecock Hills in 2018 when he hit a moving ball on the 13th green on Saturday because he was frustrated with his play and the golf course set-up. Some tried to defend what he did based on the back nine set-up that day but, somehow, every other player in the field, dealing with the same set-up, managed not to intentionally hit a ball that was still moving.

Off the golf course, his takedown of U.S. captain Tom Watson after the Americans had been crushed at Gleneagles in the 2014 was an embarrassment to both Mickelson and (unfairly) to Watson. There was also the SEC insider trading issues and rumours that Mickelson had a gambling problem—he DOES love to gamble.

There was also the very genuine heartbreak of Amy’s breast cancer in 2009. When Mickelson won his third Masters in 2010, their post-victory kiss was an unforgettable moment. 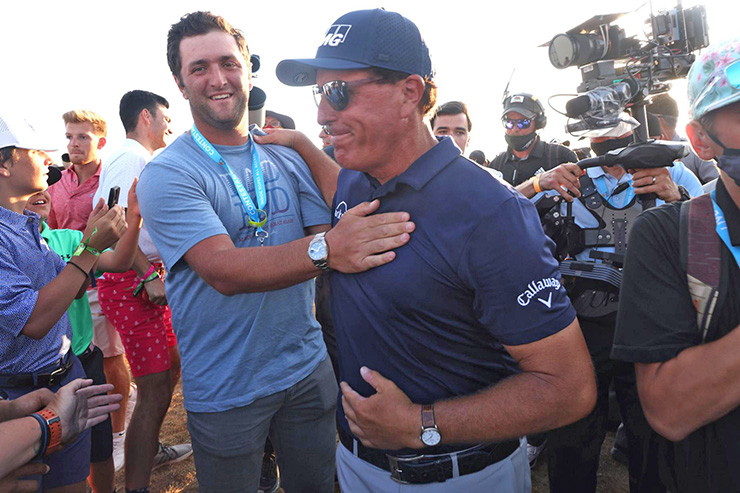 In getting older, Mickelson has become a “papa bear” figure among peers such as fellow Arizona State alum Jon Rahm. Jamie Squire

No one has ever questioned Mickelson’s devotion to family. In 1999, during the final round of the U.S. Open at Pinehurst, he wore a beeper because Amy was about to give birth to Amanda, their first child. If Payne Stewart hadn’t made his famous 15-foot-putt on the 18th green, there would not have been a playoff the next day because Mickelson would have been long gone to be there when Amanda was born. In 2013, when Amanda graduated from high school the day before the U.S. Open began at Merion, Mickelson flew home to California, then flew back overnight to make his Thursday tee time. He finished T-2. If he’d not lost a night of sleep …

MORE: A rowdy atmosphere at Kiawah reminds us what a major is supposed to be like

Exactly where and when Mickelson became “papa bear”—to quote Zach Johnson—to young American players is difficult to pinpoint. He has, for the last dozen or so years, insisted on playing Tuesday money games with young players he thinks might be on the Ryder Cup team. Whether you liked or didn’t like what he said about Watson in 2014, his comments did lead to players having more input on issues surrounding future teams.

Woods, who was even more aloof than Mickelson in his early years on tour, is now adored by today’s players, largely because so many of them grew up watching him dominate the sport. On Sunday, when Rory McIlroy was asked his first memory of Mickelson, he admitted he really didn’t have one. “I think I was too caught up in whatever Tiger was doing,” he said.

Woods is the icon; Mickelson is papa bear. He’s the guy they all want to play with on Tuesday, even if they know he will trash-talk the entire day and collect every last dollar he wins. He’s now the unquestioned leader of every Ryder Cup (or Presidents Cup) team he plays on and he may very well tee it up for Steve Stricker come September at Whistling Straits.

More than anything, he’s the guy everyone wanted to give a hug on Sunday. That’s a long way from his days as Eddie Haskell.

MORE: The Ocean Course has earned its place in major championship golf