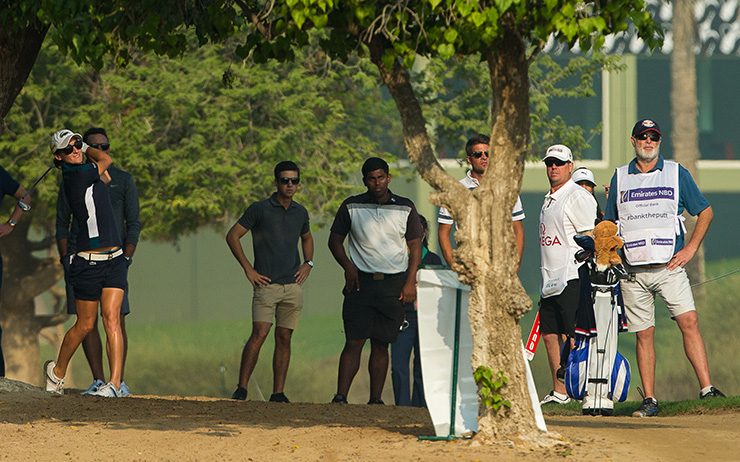 Tributes have flowed for Max Zechmann, the Dubai-based Austrian caddy who suffered a fatal heart attack on the opening day of the Omega Dubai Ladies Masters Wednesday.

Thomas Bjorn, Europe’s freshly unveiled captain for the 2018 Ryder Cup matches in France, led the out-pouring of grief after Zechmann collapsed near the 13th green on the opening morning of the Ladies European Tour event at Emirates Golf Club.

Zechmann, pictured (far right) caddying for France’s Anne-Lise Caudal just moments before he collapsed, later died in Rashid Hospital. He is survived by his wife Elinor and three sons Maximilian, Ryan and Marco and had reportedly retired to Dubai two years ago after winning with European Tour players Marcel Siem and Marcus Brier.

“Dreadful news out of Dubai this morning. Thoughts are with loved ones and everyone involved. RIP,” Bjorn said.

Carly Booth, the 24-year-old Scot playing alongside two-time LET winner Caudal and US star Blair O’Neal, described the experience as “horrendous”. “Tough start today for our group to experience something so horrendous. Thoughts and prayers are with the family and friends of Max #sadday”

At a loss for words. The tragedy that happened today in our group really puts life into perspective. My ❤️ goes out to the family #ripMax 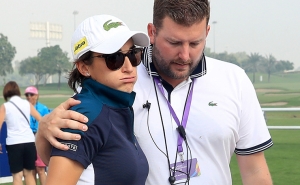 Marshall’s comments come after officials were heavily criticised for allowing play to continue when 52-year-old Zimbabwean Ian MacGregor, caddying for Scot Alastair Forsyth at the Madeira Islands Open in May 2014, died in similar circumstances.

Zechmann’s death is a double tragedy for Emirates Golf Club after founding member and former captain Ashok Bakshi, then 75, died after suffering cardiac arrest on the range before the Pro-Am at the 2015 Omega Dubai Desert Classic.

Play was officially suspended at 10.30am on Wednesday and abandoned for the day shortly afterwards as a mark of respect for Zechmann and the “shocked” players, caddies and tournament staff.

Florentyna Parker tops the leaderboard at -7 after the 26-year-old Englishwoman negotiated the Majlis’ homeward nine (after teeing off on the 10th) in a scarcely believable 30 stokes, her only blemishes being pars on the 11th and 14th holes.

Cheyenne Woods (USA) was second at -4 while Whitney Hillier and France’s Jade Schaeffer were a further shot back. Australian Hillier’s -3 total through five holes included a hole in one on the 171 yard 4th hole.

But it all paled into insignificance on a day when golf was secondary as LPGA Tour hopeful/social media influencer Paige Spiranac, +4 through six holes, so poignantly tweeted.

“Praying for the family and friends of the caddy. It just shows you that there’s so much more to life than a good or bad round.”

Praying for the family and friends of the caddie. It just shows you that there's so much more to life than a good or bad round https://t.co/Tizleg3nc0

Dreadful news out of dubai this morning.
Thoughts are with loved ones and everyone involved.@LETgolf
RIP