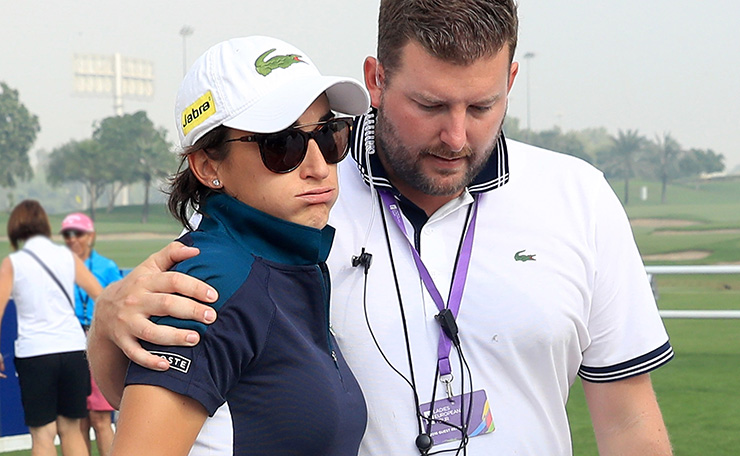 Play on the first day of the Omega Dubai Ladies Masters has been called off as a mark of respect for the caddy of French professional Anne-Lise Caudal who died after collapsing on course.

The caddy was attended to by the event’s onsite medical team near the 13th green on Emirates Golf Club’s Majlis course just after 10am Wednesday (UAE time) before being rushed to hospital where he was later pronounced dead.

Attempts were being made to notify the bagman’s family.

Caudal, who was paired with American Blair O’Neal and Scot Carly Booth, was comforted by tournament director Michael Wood (pictured above) as the tragedy played out just four holes into their opening round.

“On behalf of our membership, we offer heartfelt condolences to the individual’s family and loved ones.”

Tough start today for our group to experience something so horrendous.Thoughts and prayers are with the family and friends of Max 😪#sadday

Mohamed Juma Buamaim, vice chairman and CEO of tournament organizer and promoter ‘golf in DUBAi’ said: “We are deeply saddened by the sudden passing of this caddie. Our thoughts and prayers are with his family at this difficult time. May his soul rest in peace.”

Round one was officially suspended at 10.30am and will resume on Thursday morning with the season ending event now to be decided over 54 holes.