EXCLUSIVE VIDEO: Henrik Stenson rewinds the year of his career 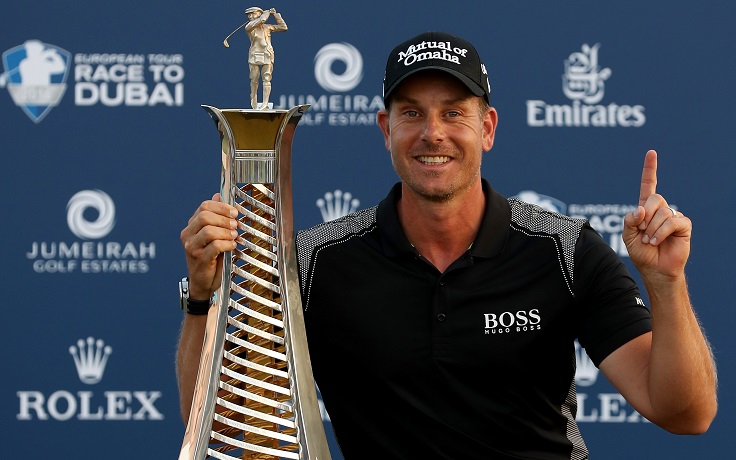 The 40-year-old Swede sat down after hosting a golf day for watch sponsor Audemars Piguet at The Els Club, Dubai, little more than 24 hours after clinching his second European Tour Player-of-the-Year title courtesy of a T9 finish at the DP World Tour Championship at nearby Jumeirah Golf Estates.

Stenson touched on subjects as diverse as his love for Game of Thrones and football matches with his children, and reveals Englishman Justin Rose as his best buddy on tour “despite him beating me at the Olympics”.

The Rio Games silver medallist goes on to share fitness and course management tips with outgoing editor Robbie Greenfield and discusses his burgeoning course design business during the in-depth interview.

Discussion inevitably turned to the 145th Open Championship and the world No.4’s “extraordinary” Sunday afternoon duel with Phil Mickelson at Royal Troon. Stenson describes it as a “boyhood dream come true” and credits Lefty for spurring him on to his historic 10-birdie final round 63.

“Pretty much you have to be two to Tango, right, so without Phil to push me to the edge I don’t think I would have played as well as I did… so he certainly has his part in it,” Stenson said of Mickelson’s brilliant closing 65 and their battle which Jack Nicklaus and eventual winner Tom Watson have since conceded out shone their epic Duel in the Sun at Turnberry in 1977.

SEE ALSO:
Stenson a showman to the end

“It’s a very humbling experience to be mentioned in reference with the Duel in the Sun from the 70s and to be receiving messages from those players that they thought it was an even better match this time around.

“I’ve seen the full coverage from that Sunday and it’s pretty pleasing I have to say. It was an extraordinary day. Managed to break some records that have been there for a while. You never know, they might be washed away next year but they might stand for the next 30 years as well so there was certainly some added bonus to not just winning The Open, which was great in itself, but to set those records…”

Stenson again paid tribute to his great, late mate Mike Gerbich, the Emirates Golf Club stalwart who sadly passed away the week of The Open after losing his battle with cancer.

“Someone put a message up ‘Go win The Open for Mike’ and I was like, yeah, I’m going to try my hardest,” Stenson recalls.

“You know, it might have been the one thing that made a little bit of difference there. When you play for someone else you play with a purpose and I’m sure that helped me. If there is divine intervention that was certainly one of those cases.” – Stenson on his late mate Mike Gerbich

In his final question, Stenson was asked to finish the sentence: “Henrik Stenson in 2017 will…”

The reply was as you’d expect. But Stenson admitted his hopes of adding a second major championship to his glittering CV is now much easier said than done given the way his life became even crazier after his record-shattering triumph at Royal Troon.

“Yeah, it’s a bit more busy, a [few] more things to do but at the same time I think I’ve been progressing over the years in managing my time, and managing my calendar and becoming better at saying no,” he said.

“[There’s] only so much time in a day and it’s easy to be going away from what’s your core business and that’s still practicing and competing and playing good golf. “

Stenson admitted on Sunday that he never imagined topping his “Double-double” in 2013 when he become the first player to win the FedEx Cup and Race to Dubai as well as both season ending Tour Championships. But the past year has proven there’s every chance of more magic to come from the Iceman, as tough as it will be for the Swede to topple a brilliant 2016.