Stenson a showman to the end 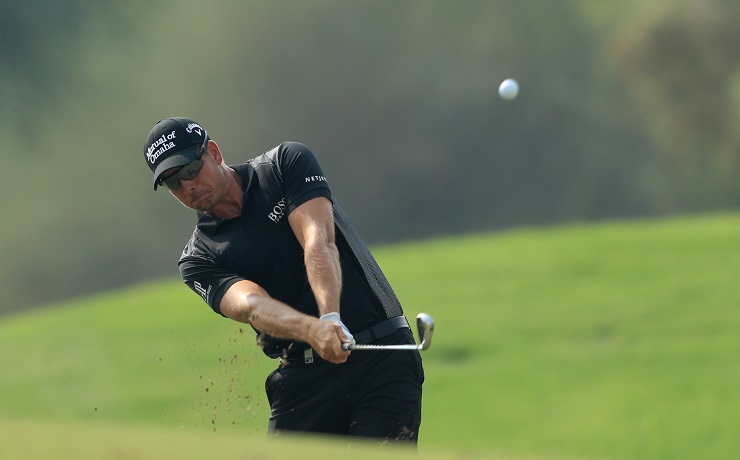 Henrik Stenson was pleased to let his golf game do the talking Sunday but typically saved the punchline till after he’d sealed the year of his glittering career and a handy $1.25 million Christmas bonus.

The Swedish showman made light of clinching a second European Tour Player-of-theYear title at Jumeirah Golf Estates and with it the lion’s share of the tour’s $5 million bonus prize pool – three seasons after clinching his first Race to Dubai crown.

“I’m very pleased because I’ve got two [2013 and 2014] DP World Tour Championships and I’ve got two Race to Dubai titles. I have my home in Sweden and I have my home in America, so I can spread it out and make it look good in both places,” The Open champion said after a classy closing seven under 65 around Earth to finish in a tied for ninth.

He mightn’t be the best golfer in the world – not that No.4 is a ranking to be sneezed at – but few in the pro ranks are funnier than Stenson when it comes to interaction with the media, and by association, the game’s all important fans.

The 40-year-old has every reason to be jovial, too, after a 2016 in which he’s secured the Claret Jug, an Olympic silver medal, the BMW International and the Harry Vardon Trophy as the European Tour’s order of merit champion.

“I’m very pleased to get my name on this trophy once again. It’s been a great year, the best year of my career,”  said Stenson, delighted his name now twice adorns a trophy inscribed with Ballesteros, Langer, Faldo and Montgomerie, among other legends of the European Tour.

“I’ve always thought it was going to be hard to top 2013, but I think I’ve done that this year. Maybe not to the level of golf over six months [in 2013], but certainly with the highlights of winning The Open, the Olympics and managed to win The Race to Dubai again. So it’s been a great year and it feels lovely to finish in this way.”

Stenson never threatened the leaders in this absorbing 8th edition of the DP World Tour Championship but he did sign off the season ender in style with eight birdies and a solitary bogey, his 65 Sunday matched by playing partner Rory McIlroy who also finished -7, 10 shots behind winner Matthew Fitzpatrick.

“This isn’t highlights we’re showing you. This is what is happening live. Amazing!” Torrance said.

It surely was. By the seventh hole, Stenson was five under for the final round and a combined 10 under for his last 15 holes around Earth after saving his Saturday with five birdies in his last seven holes.

McIlroy even pulled within two shots of the lead after going out in 30 strokes but ultimately left himself with too much to do after his sloppy opening 75 on Thursday.

“It was nice to shoot a good score out there and redeem myself a little bit [after] a very slow start this week,” the world No.2 said.

“Looking back on the week, that’s the day [Thursday] that I’m going to rue, I guess. You know, the last two starts of the year for me have been slow starts, with China a few weeks ago, started slowly there, and if I had not of done that, I would have maybe had a chance, or half a chance.”

Like all the players, McIlroy is looking forward to a golf free break with fiancée Erica Stoll, starting with Thanksgiving next week. There’ll also be a bit of R&R and just a little business in Dubai too.

“It’s a big deal in our household now. Thanksgiving in New York, and then back home to Northern Ireland for a couple of weeks,” McIlroy said.