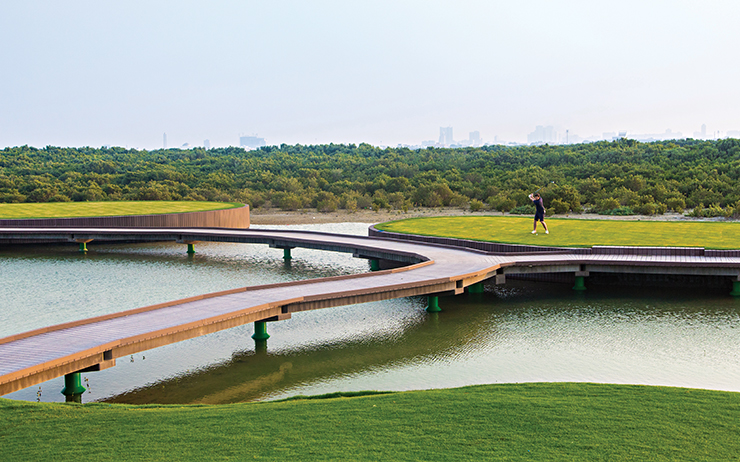 Before Al Zorah Golf Club opened its doors to the public in December 2015, we were privileged enough to be the first to play some holes. What we found was a course to match the memorable setting, with bundles of character and no shortage of bite, either

There are a number of tee shots in the Middle East that never fail to make me twitch inwardly. Dubai Creek’s 18th is naturally one, as is Al Badia’s fifth. And now having been fortunate enough to enjoy a preview play in Ajman last month, I can add the par 5 ninth at Al Zorah Golf Club to the list. There’s something unsettling about having over one million square metres of mangroves occupying the entire righthand side of your field of vision. That’s an awful lot of mangrove to misplace one’s ball in. And the island tee boxes that protrude from the tidal inlets, visually stunning as they are, do nothing to ease these jitters.

Over the past few months, we’ve gotten to know the layout at Al Zorah relatively well. As a haven of peace and tranquility, its merits were already beyond question, but how would the holes actually play? Would the character of the course match the unique setting? Even though we only played five holes, the answer is an emphatic yes. We were prepared to overlook the condition of the course, given that we played it a full six weeks before the opening date, but were taken aback by the firm, well groomed playing surfaces. The greens had been top-dressed, but this is a course with some pace to it, which is appropriate given the fairly linksy design. It has all the ingredients of a course that demands repeat play, too. There’s tremendous variety here, added to the fact that the ever-changing tides literally transform the look of the course by the hour. The tidal mangrove element of the course will no doubt become Al Zorah’s calling card, but the course could stand alone as a fine test of golf, with or without this imaginative integration.

Our experience began on the par 4 fourth, which is one of the more standard holes on the layout. At 429 yards it’s by no means a monster, but will typically play into the wind and features both a well bunkered landing area off the tee, and green complex. The team at Nicklaus Design have been sparing with their use of bunkering, but the variety and the way they are used will keep you on your toes. The par 4 10th and 11th, for example, have no greenside bunkers at all, while the stretch of holes from six to eight are as heavily guarded as any greens I can think of in the region. Al Zorah Golf Club will be fun because it allows golfers to get the ball in play. Nine aside, there aren’t too many tee shots that will strike fear into a player. But there are so many nuances that will make good scoring difficult.

We had the chance to experiment with some shots from the tidal flats that come into play on at least half the holes, and while certainly being preferable at low tide, even when dry they are far from easy to hit from. The raised wooden boardwalks add to the sense of adventure and enhance the feeling of playing in a nature reserve, which is undoubtedly one of Al Zorah’s chief appeals. That it boasts an excellent and intelligent golf course to match its setting is both a cause for relief and excitement.

The Holes We Played

HOLE 4
Par 4 • 429 Yards*
Playing into the prevailing wind, this was proof that Al Zorah doesn’t always need tidal flats and mangroves to present a challenge. Bunkers left and right off the tee give way to an even more heavily bunkered green.

HOLE 6
Par 3 • 170 Yards
The short holes are terrific at Al Zorah, and this one is right up there with the best. A skinny green is better guarded than any on the course, with the tidal water hazard a prominent and eye-catching feature.

HOLE 9
Par 5 • 560 Yards
The island tee boxes on this belting par five nestle right up against the mangroves, which is where this hole stays for its duration. This could be the scariest tee shot on the course.

HOLE 10
Par 4 • 393 Yards
Not all of Al Zorah Golf Club’s greens are defended with bunkering. The run-offs on 10 will filter wayward approach shots into bowls and swales.

HOLE 12
Par 4 • 446 Yards
This one was long and tough, with a generous landing area just about the only respite. Another beauty that incorporates the tidal feature.

*All yardages are from the back tees