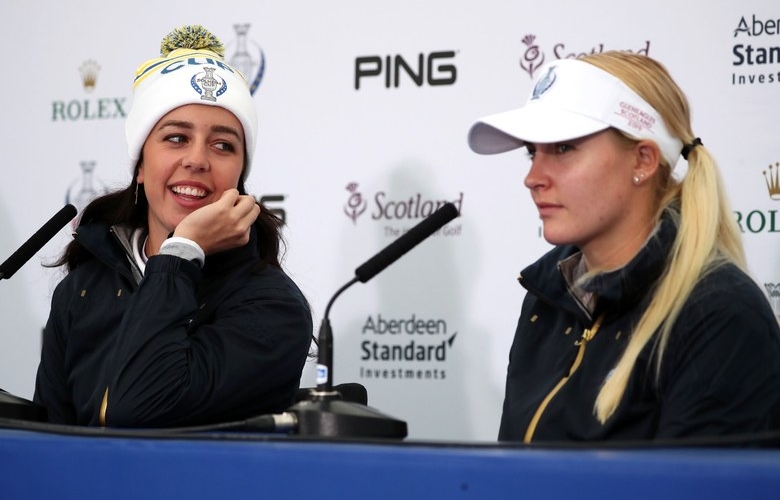 
By John Huggan
GLENEAGLES, Scotland — It’s the same every time. No matter the trophy up for grabs. No matter the gender of the participants. No matter the venue. Whenever professionals get together for one of golf’s biennial jousts, be it the Ryder Cup, the Presidents Cup or, this week, the Solheim Cup, a liberal dose of hyperbole is invariably employed in the days before the resumption of hostilities.

Clichés abound, too, one of the most popular being “match play is different.” Which was the line favoured by Europe’s Charley Hull and Georgia Hall in their press conference from Gleneagles on Wednesday.

As is the case with all clichés, there is some truth in there somewhere. Match play is a different animal. From stroke play, that is. Head-to-head contests over 18 holes require a different mentality than when playing a 72-hole, count-them-all tournament. It is—speaking of good clichés—sprinting versus marathon running.

Given all that, however, the “different” option does tend to be trotted out by those whose form is best described as “indifferent.” Which is certainly true of Hull and Hall of late. So far this year, the young Englishwomen—two of the five highest-ranked members of European captain Catriona Matthew’s 12-player team—have combined for one top-10 finish.

“You can’t have a fantastic year every year,” said Hall, 23, who won the Women’s British Open at Royal Lytham in 2018 after going 2-3-0 in her Solheim debut one year earlier. “But I’ve played a lot of consistent golf over the past two or three months. I think I’ve done pretty well at the British and Evian and Scottish. So I had a week off last week, practiced quite a lot. And Solheim is completely different to every other event, and it is much more mental. You see shots you’ve never seen hit before in Solheim Cups.”

Hull was quick to assume a similar posture.

“I decided to take three weeks off and rest up and just do a lot practice and sharpen my game,” said the 23-year old, who is 7-3-1 in three Solheim Cup appearances. “I felt I was playing quite steadily over the last few weeks. So I’m feeling really good for this week and really looking forward to it.”

Unfortunately, Hull’s recent memory is somewhat lacking, or at least selective. In five starts since finishing T-16 at the U.S. Women’s Open in May, she has failed to record a top-20 finish and missed two cuts.

As for Hall, her most recent form is steady enough if pedestrian. Since missing the cut in that U.S. Women’s Open, the 23-year-old from England’s south coast has plodded along. In eight appearances on the LPGA Tour, T-24 is her best finish.

Ah, but there is another side to this so far depressing coin. History is littered with examples of players arriving for team contests wildly out of form yet somehow finding inspiration from somewhere.

Sergio Garcia at last year’s Ryder Cup is an obvious example. The Spaniard arrived in France for his ninth appearance against the United States with nothing much other than the faith of captain Thomas Bjorn to bolster his confidence. But come Sunday evening, the 2017 Masters champion was Europe’s all-time leading points scorer, having amassed three from four matches at Le Golf National.

Then there is Matthew at the last Solheim. The then-48-year-old Scot picked up in Iowa as one of Annika Sorenstam’s assistants, having done little or nothing to justify a captain’s pick in the run-up to the matches. An injury to Suzann Pettersen meant a change of role and, sure enough, Matthew won three points in four starts.

Matthew will be hoping for something of the same from Hall and Hull. It is hard to imagine a European victory this time without a significant contribution from the two youngsters. But you never know. Match play, in case you haven’t heard, is different.