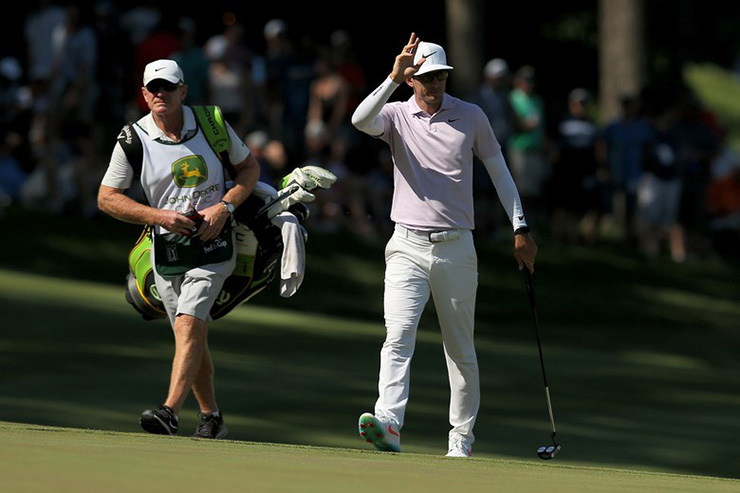 SILVIS, ILLINOIS – JULY 14: Dylan Frittelli of South Africa waves to the crowd on the 18th green during the final round of the John Deere Classic at TPC Deere Run on July 14, 2019, in Silvis, Illinois. (Photo by Dylan Buell/Getty Images)

By John Strege
Jordan Spieth is a part of his biography. So is Tiger Woods, close enough, anyway, by one degree of separation. Yet Dylan Frittelli’s own contributions to his biography have not been sufficient enough to warrant wide attention.

Maybe the South African native is on the cusp of changing that. A 29-year-old PGA Tour rookie, Frittelli won the John Deere Classic by two strokes with a bogey-free weekend that included rounds of 65 and 64 on the TPC Deere Run in Silvis, Ill.

“Just proves that the work I’ve been doing is the correct work,” Frittelli said. “Being 150th in the FedExCup throughout the season is so frustrating because you don’t see the results come through. If you just keep sticking to it, and I made that change on my mental game this week and last week and thankfully came to fruition this week and helped me out.”

Frittelli’s sports psychologist is Jay Brunza, with whom he began working when he played college golf at Texas. Brunza is best known for his work with Woods throughout his amateur career, even caddying for him in his U.S. Amateur victories.

“He and I have been texting all week,” Brunza said from his home in San Diego. “I just sent him a short text last night.”

Brunza declines to reveal the substance of his work with clients, though he did offer this: “I think a nice way of putting it, I sent him a nice text of encouragement, positive encouragement, and we’ll see what happens. You don’t focus on win or else.”

Frittelli hinted at the gist of their texts. “It was mental clarity,” he said. “I owe a lot of credit to Jay Brunza. We worked on tons of techniques to try and perform the best. I’m not going to give away too many of the techniques, but the plan for this week was just to be creative and have fun. I’ve just been carrying a lot of weight on my shoulders. I’d obviously won on the European Tour, but my exemption was running out at the end of this year, so I was looking at, if I don’t keep my card here on the U.S. tour, I have to go to Korn Ferry Tour school and play the playoffs there, and try and get my card back. Then I’m giving up three or four weeks to play in Europe where I can try to keep a card. All this stuff has been going through my mind.”

His was a victory that was not a long time coming, though it might have seemed that way. The meteoric rise of young college stars, from Spieth to Matthew Wolff and Collin Morikawa, overshadow the traditional route, the slow, steady ascent that Frittelli has undertaken.

Frittelli was a senior star at the University of Texas, when Spieth, whom he immediately nicknamed “Superstar,” joined the team as a freshman. The Longhorns won the NCAA Championship that year, with Frittelli holing a title-clinching 30-foot birdie putt. He began his professional career in Europe, though with a goal of playing the PGA Tour. He won tournaments on the Challenge Tour in 2013 and 2016, then won twice on the European Tour in 2017, when he reached 44th in the World Ranking.

“Everybody seems so spoiled now, expecting that guys are going to come out of college and win a tournament,” Brunza said. “His was kind of the true, normal development, like baseball, where you start out in the minor leagues and work your way up. He won on the Challenge Tour, works his way onto the European Tour, gets the experience and wins twice. He came over here and earned his card, made a lot of cuts. You can see it, that constant development.”

In the final round on Sunday, Frittelli calmly and no doubt enjoyably equalled the second-best round of the day. He cinched the victory with a birdie at the par-5 17th hole.

His first PGA Tour victory, incidentally, came in the same tournament that Spieth won in 2013 for his first win. No one is yet labelling Frittelli a superstar, though for one magical weekend, at least, he played like one.