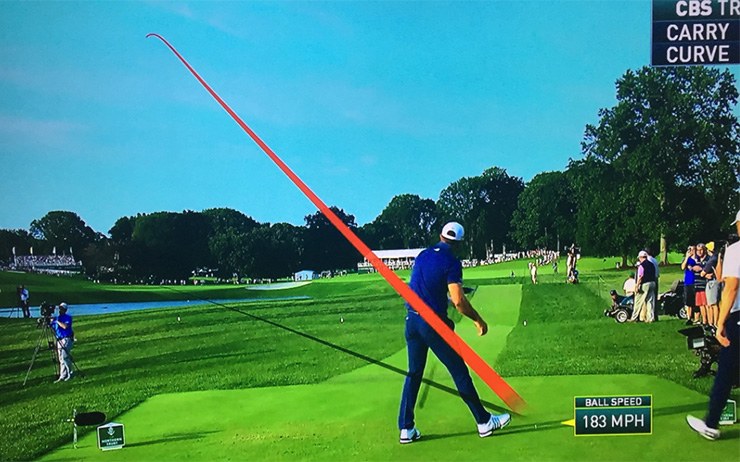 By Alex Myers
If you watched Sunday’s TV coverage of the Northern Trust, you could hear the collective jaw drop of CBS’ Jim Nantz and Nick Faldo over Dustin Johnson’s prodigious drive on the first playoff hole. You also saw the ridiculous line DJ took off that 18th tee and the ridiculous spot to which his golf ball rolled. But it’s worth taking a closer look, because, again, it was ridiculous.

Let’s start with the video of the mighty blow struck by Johnson’s driver that turned the long, uphill closing par 4 at Glen Oaks Club into a pitch and putt that the World No. 1 birdied to beat Jordan Spieth in a playoff. After missing right in regulation on 18 and needing to make a 20-footer to save par and force extra holes, Johnson took a much, much more aggressive aim with his tee shot the second time around:

Does anyone other than @DJohnsonPGA even consider this line off the 18th tee? #QuickHits pic.twitter.com/pgHJS1dFWV

But these three photos/graphics paint an even better picture of just how good — and bold — Johnson’s tee shot was. First, a side-by-side look at the extremely different lines Spieth and Johnson took off the 18th tee:

A look at where their two golf balls wound up:

And finally, a look at the two players standing in the fairway. Well, if you can see Jordan way, way back there somewhere:

With the victory, Johnson tied Justin Thomas for the PGA Tour lead with four wins. But DJ is going to need to do something special the rest of the FedEx Cup Playoffs to overtake JT — and even Spieth with his three wins, including a major — for Player of the Year honors. We’re going to go ahead, though, and give him the award for Tee Shot of the Year.

Kevin Kisner calls No. 18 at the Northern Trust the “worst hole ever,” other PGA Tour pros seem to agree

Jordan Spieth shoots 64, leads by three over Dustin Johnson at The Northern Trust