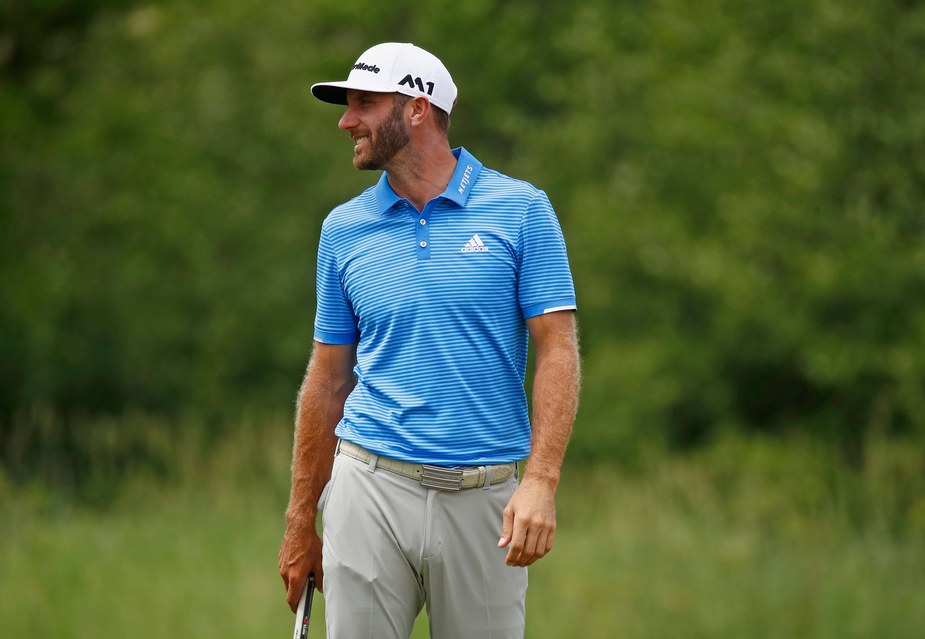 Dustin Johnson, the defending champion, during a practice round prior to the U.S. Open at Erin Hills. (Photo by Gregory Shamus/Getty Images)

The following day, Johnson hopped on a jet from his home in South Florida bound for Erin Hills, where he’s looking to become the first player since Curtis Strange in 1989 and just the third since World War II to successfully defend a U.S. Open title.

To some it would be a whirlwind 72 hours. Not the laid back Johnson.

“Now I’ve got to play golf,” he said on Wednesday after spending last week practicing at Sherwood Country Club outside Los Angeles and Sunday at Bel-Air Country Club there. “This is why I’m here.”

The first time Johnson came to Erin Hills — two weeks ago after missing the cut at the Memorial tournament — he immediately liked what he saw in the 21 holes he played over two days.

The same was true during a late afternoon practice round on Tuesday when he hit it beautifully over 18 holes.

“Business as usual,” said his swing coach Claude Harmon. “It’s perfect for him.”

The length. The fairways and rough. The wind. The greens.

It’s his kind of ballpark.

“It’s another course which — all U.S. Opens there’s a big premium on hitting the fairways,” he said. “I like the golf course. I think it sets up very well for me. If I get some holes downwind I can take advantage with the driver and can carry some bunkers and carry some corners.”

It’s also the first major Johnson is playing in this year after he missed the Masters because of a back injury that he sustained when he slipped and fell down a few steps in his rented house on the eve of the tournament.

Asked if his accommodations this week have any stairs and which scares him more, the prospect of navigating the steps or the thick rough at Erin Hills, he said, “Neither.”

“I’ll slide down [the stairs] on my butt,” he joked. “The rough is terrible. You’ve got to hit it in the fairway, but they give you plenty of room.”

There’s also seemingly plenty of room between Johnson and the rest of golf at the moment.

Before he injured his back at the Masters he had won his previous three starts. When he returned a few weeks later, he finished second at Quail Hollow.

Entering this week, he has a nearly five-points average lead in the Official World Golf Ranking over No. 2 Rory McIlroy.

Then there are his performances in the world’s toughest golf tournament.

In nine previous U.S. Opens, Johnson has finished in the top 10 four times, including each of the past three years when he tied for fourth at Pinehurst in 2014, was runner-up at Chambers Bay in 2015 only after three-putting the 72nd hole to lose by one, and winning last year by three at Oakmont despite the bungled handling of a penalty late in the final round.

Since that seminal victory and first career major title, Johnson has 10 finishes in the top five in 21 starts, including five wins.

“Close,” Johnson said when asked how close he is to playing to the level he displayed at Oakmont. “It’s been really good this year until I injured myself, but [bleep] happens.

“I’m starting to see signs of it being really good.”

No. 1 in the world, defending champion and the longest hitter in golf. Will that intimidate the rest of the field?