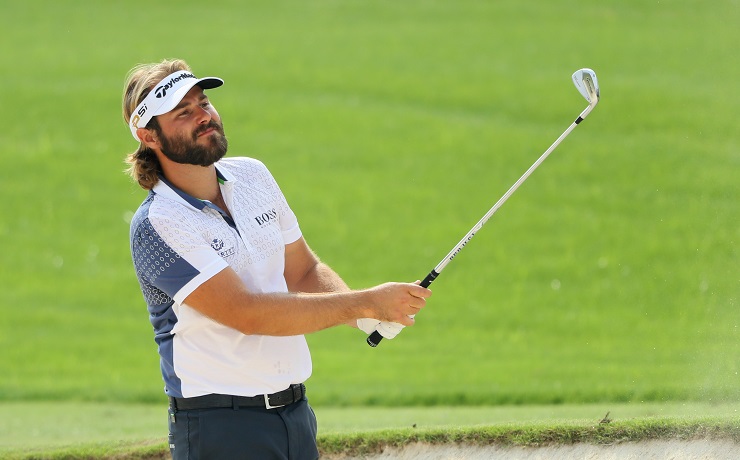 Victor Dubuisson was an unexpected but thoroughly fitting name atop the leaderboard after a moving day unlike any other witnessed on Earth in the eight year history of the DP World Tour Championship.

The enigmatic but brilliantly talented Frenchman, conspicuous by his absence from the first page of leaderboards pretty much all year, will take a one stroke lead into the final round of the final tournament of the European Tour season after carding a majestic eight under par 64.

What Dubuisson won’t take into Sunday is Saturday’s lowest score. That belonged to Spaniard Rafa Cabrera Bello who put a fist-pumping exclamation mark on a nine-under 63 to rocket 18 places up the leaderboard and firmly into contention.

Dubuisson is 13 under par (203), a shot clear of Belgian Nicolas Colsaerts and the young English duo of Matthew Fitzpatrick and Tyrrell Hatton. Cabrera Bello is just a shot further back in a three way share of fifth alongside Lee Westwood and Francesco Molinari at 11 under (205).

Of all the names above, only Hatton didn’t see the summit of the leaderboard on a topsy-turvy Saturday which produced 15 eagles, five different leaders and one final, mouth-watering day to look forward to Sunday.

Until his T3 finish at the Nedbank Golf Challenge hosted by Gary Player in Sun City last week, Dubuisson’s season wasn’t anything to shout about, the 6ft Frenchman banking 712,817 euro in 18 starts.

In fact, his only other result better than 38th was at T4 in the very first tournament of the season last December, by quirk of the 2015-2016 wrap-around schedule also the Nedbank Challenge (but not hosted by nine-time major champion Player) at Sun City in South Africa.

But Dubuisson has got progressively better on Earth with rounds of 70-69-64, the latter including seven birdies and an eagle two at the 5th when he sucked a wedge softly back into the hole.

“I’ve played well, made good putts at the right time. I’m happy to be able to putt it in the hole. It’s just a course I like… it’s long. You have to carry the ball long.”

Colsaerts clearly concurs, the Belgian boomer recovering from a bogey start Saturday with eagles at the 7th and 18th and six birdies in his 66. Rikard Karlberg matched his two eagles, the Swede storming home birdie-eagle-birdie-par-eagle for a 67 to be seven under.

Fitzpatrick matched Colsaerts’ six under Saturday, briefly taking the lead with an eagle at seven courtesy of a 78ft putt.

Hatton’s started his round of 67 bogey-eagle-bogey-birdie-birdie-birdie-bogey before the rarity of a par on the eighth. There were three more birdies as he came home in 33 strokes but it wasn’t half as impressive as Cabrera Bello who covered the homeward nine in three fewer strokes. The disappointment was a bogey at the 9th which cost him a share of the Earth course record of 62 set by Justin Rose in 2012.

Molinari started the third round in a share of the lead with Sergio Garcia. It lasted exactly one hole as both bogeyed just after Westwood had birdied to make up the shot the Englishman had thrown away on the 18th hole the previous evening.

But while Garcia went backwards on moving day with a 74 to slip six off Dubuisson’s sizzling pace, Molinari dug deep after another bogey at the 4th to card a two under 70 and keep himself in the hunt.

Westwood, too, deserves credit for his 69. The 2009 DP World Tour Championship winner extended his lead to three when he chipped in for eagle on the 2nd, only to bogey the 4th, 5th and 14th before three birdies in his final four holes.

The bogey at five was particularly galling as Westwood tugged a downhill two footer and watched as it rimmed further away that he had started. He then pushed the return putt to turn a birdie into a bogey and will need more from his often uncooperative flat stick Sunday if he is to repeat at JGE.– Kent Gray