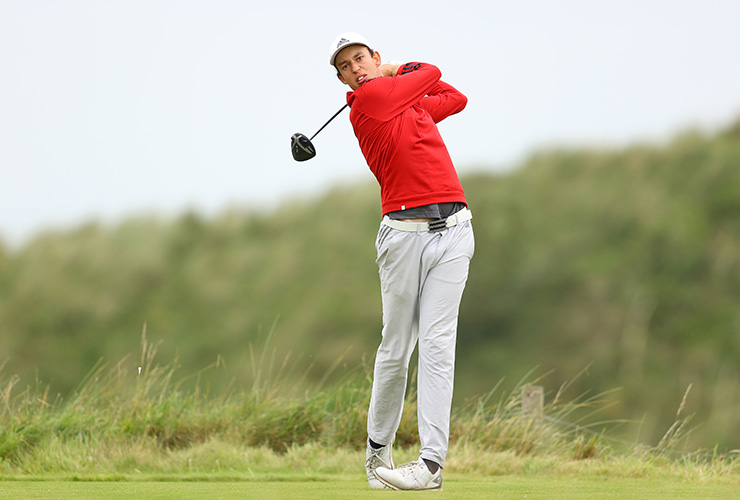 FILE PHOTO: Richard Heathcote/R&A/R&A via Getty Images
Josh in action during the 2020 Amateur Championship at Royal Birkdale in Southport, England.

By Kent Gray
Josh Hill’s already memorable UK summer has gone for good to great with his call-up to the full England national men’s amateur golf team for the first time.

The 17-year-old MENA Tour prodigy has been selected in the 11-strong side for England’s defence of the senior Home Internationals title at Hankley Common Golf Club in Surrey from September 15-17.

It comes after the Trump International Golf Club, Dubai member helped England capture the U-18 Boys’ Home Internationals with 5½ of a possible six points at Woodhall Spa earlier this month before capturing U-20 honours at last weekend’s Brabazon Trophy (England Open Strokeplay Championship) where he eventually finished T-12.

Hill’s proud father summed up the Dubai-based family’s excitement in a social media post: “Another great honour for Josh being asked to represent England in the Men’s Home internationals! Was unexpected but it’s friggin awesome! Congratulations Josh!”

Hill Jnr. won’t have long to dwell on another career-high as he prepares for the Jacques Léglise Trophy starting at Falsterbo Golf Club in Sweden on Friday. He’s one of nine Great Britain and Ireland players hoping to prevent Europe from winning the coveted annual U-18 matches for a second successive edition.

Together the pair won all three of their foursomes matches at Woodhall Spa and Hill was only denied a perfect record after being held to a half by Ireland’s Thomas Higgins in his opening singles match.

The full England lineup is:

Hill’s graduation to the senior England team caps a fine summer highlighted by a share of 4th at the St Andrews Links Trophy where he narrowly missed a playoff, as well as his George Henriques Salver win at the Brabazon Trophy as the top GB&I player under the age of 20, a prize he shared with England colleague Frank Kennedy.

The COVID-19 pandemic and a loss of form saw Hill miss England Boys’ selection last summer following his amateur career-defining win at the MENA Tour’s Al Ain Open in 2019 where he became the youngest winner of an Official World Golf Ranking event. But he’s more than made up for the temporary blip during a summer campaign where’d he’s churned out impressive results despite often not bringing his A-game to the table.

He’ll hope to repay the England selectors’ faith at Hankley Common G.C. where Wales, Ireland and Scotland await. The Home Internationals are played in a round-robin format over three days with each match comprising five-morning foursomes and 10-afternoon singles.