Do genes matter In golf? 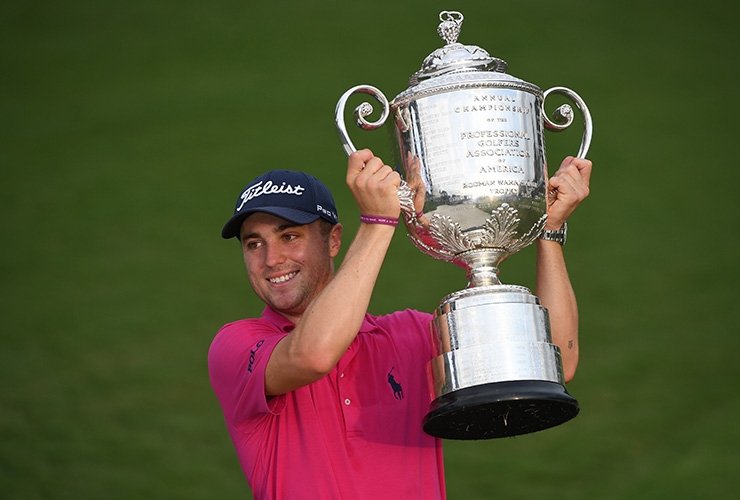 By Jordan Fuller
When Justin Thomas hoisted the Wanamaker Trophy for winning the 2017 PGA Championship into the humid North Carolina air, his father, Mike, and grandfather, Paul, stood alongside marvelling at the accomplishment. Over the past few decades, both Mike and Paul had dreamed of a moment that Justin was enjoying because golf was the lifeline of the Thomas family.

But why was Justin the best of the three Thomas golfers? All three had varying degrees of success in their golfing careers, but Mike and Paul couldn’t even touch the level of professional accolades that Justin had obtained with his major victory.

Did he have more talent than his father and grandfather? It was apparent to see that the three men all shared something that made them great at golf but was that genetic? Or something more?

Does genealogy make the athlete or do they just set the stage?

How the Thomas Family created Justin
The Thomas family love of golf began in the late 1940s when Paul discovered golf in his teens. Working at clubs as an assistant professional, Paul became a highly accomplished golfer after moving back to Cincinnati. He played in a U.S. Open and two PGA Championships in the 1960s alongside golfing legends Ben Hogan and Sam Snead.

As Paul became older, his golfing skills maintained their high level. He played occasionally on the senior tour and even placed in the top 15 in the 1983 U.S. Senior Open. Paul, now 86 years old, has shot his age every year since he turned 64, a staggering accomplishment.

Mike’s amateur career wasn’t as spectacular as Paul’s or, later on, Justin’s but he competed in the U.S. Amateur Open and became the head pro at Harmony Landing in 1990. It was there, where Justin, born three years later, began his golfing journey.

Justin became a mainstay at his father’s golf course, learning to say “bag of balls” at the age of two. Mike didn’t have to give Justin a passion for the game. At Harmony Landing, everyone stayed out of Justin’s way as he spent hours hitting thousands of golf balls on the range and playing hundreds of rounds each year on the course. 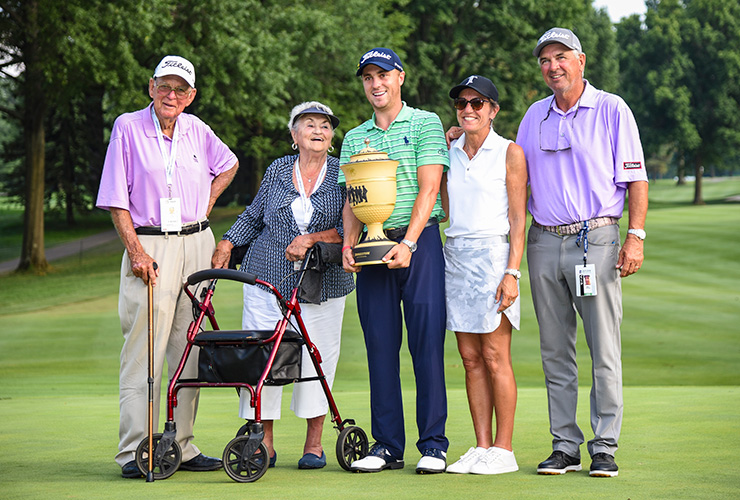 As Justin grew, Paul engaged his grandson’s mind with old golfing tales while Mike harnessed and channelled his son’s immense talent. “Mike gave (Justin) a … love of playing. He didn’t make him a lover of golf swings,” Jay Seawell, the head coach at Alabama told pgatour.com. “Mike did a great job of making Justin love Nos. 1-18. He was always on the golf course, playing with his dad. I think the more you play, the more you value the score.”

The foundation of Justin’s talent was the result of Paul’s raw skill and Mike’s patience and direction. So was talent given to Justin at birth through the genetic makeup of his father and grandfather? To find the answer, we need to dive a little deeper into the relationship between genes and fostering talent.

What about the genealogy of the Thomas family on Justin’s success?
According to the U.S. National Library of Medicine, “Studies focused on similarities and differences in athletic performance within families, including between twins, suggest that genetic factors underlie 30 to 80 percent of the differences among individuals in traits related to athletic performance.”

The 30-to-80 percent theory certainly offers a wide range of influence on passing genetic talent to descending family members. Using the example of the Thomas family, it was widely known that Paul, the oldest of the three golfers, had a large amount of success throughout his golfing life. The same could not be said for Mike, Paul’s son, but that doesn’t mean that Mike was a poor golfer. His path just moved in another direction than his father’s and his successes were far more muted.

When wondering if genealogy matters in golf, the answer is yes but with a few caveats. Justin is certainly the most successful golfer of the three Thomas family members thus far. With his father Mike running a golf club, Justin had unlimited access to golf facilities. He could play round after round and hit range ball after range ball without worrying about paying for anything he used.

The time that Thomas spent honing his skills, especially early in his childhood when most kids are just enjoying being a kid, allowed him to build a skill set that carried him through his teenage years and onto the PGA Tour. Because money in the Thomas family was not a huge priority, the youngest Thomas could get his hands on the best equipment.

So it is easy to believe that Paul and Mike set the stage of Justin’s success through their genetic hand-me-downs, but for Justin to reach the world’s highest golfing stage, you would also need to acknowledge that the privileges in his life allowed Justin to take solely focus on reaching his potential.

Raising the Trophy
Justin Thomas has flourished since his 2017 PGA title victory. He’s won three times on the PGA Tour in the last 12 months, finished top six at the 2018 PGA Championship and qualified for the 2018 Ryder Cup team.

At the Ryder Cup, Thomas teamed with Jordan Spieth and helped win four out of five matches against Team Europe, including a singles match victory over Rory McIlroy.

His genealogy coupled with the privileges of his childhood allowed him to work incredibly hard and achieved his dream of becoming a professional golfer.

“After (Justin) showed that he was going to make it, I told him, ‘Only you can screw this thing up. It’s up to you to make something out of yourself,’” His grandfather Paul said. “And he sure did.” –  Jordan Fuller is Editor-in-Chief of Golf Influence