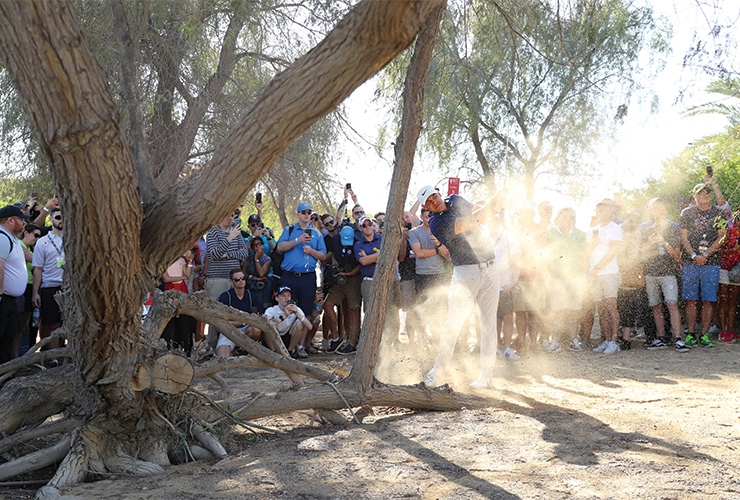 Warren Little/Getty Images
Koepka plays his second shot from a tricky lie on the 13th hole at the Abu Dhabi HSBC Championship on Friday.

By Kent Gray
The way Brooks Koepka started off his second round on Friday like he left off the first one on Thursday, it looked like the Abu Dhabi HSBC Championship might be a foregone conclusion.

But golf doesn’t work like that, not even for the world No.1. After his care and bogey free 66 to open 2020, Koepka squandered a fast, second-round start on The National to sign for an uncharacteristically messy 75.

The three-over loop, including two double bogeys, saw the 29-year-old American plummet from third to a share of 35th at -3 for the championship. He’s not out of it seven strokes behind Italian pacesetter Francesco Laporta but dangerously close to being so if he can’t get his new TaylorMade SiM driver to start cooperating quickly.

It all looked so easy after Koepka birdied the 1st from some deep, right-hand rough before very nearly holing his second shot on the 2nd. After eventually two putting for a birdie to get to -8, the Ryder Cupper was just one off the lead at the time.

But there is evidently some ring rust after all following Koepka’s three months on the sidelines recuperating from surgery to his pivotal left knee. Not that he seems overly fazed by his wayward big stick.

“Just my timing was a bit off. Didn’t hit that many good shots the last 15 holes. Good on the first two but other than that, it was a bit of a disaster. Going to go to the range and just figure it out,” he said.

Apparently it will be an easy fix too, the help of coach Claude Harmon III who is in town this week not necessarily required.
“I know what I’m doing. It’s just timing. It will take 15 balls. Yeah, it’s a lot different on the golf course trying to do it because there are consequences,” Koepka said.

“You just try to find your go-to shot and try to hit that go-to shot [when struggling with the driver]. I hit a few of them, and then tried go back to hitting a normal shot and found a couple of fairway bunkers and couldn’t even find the fairways, so it was difficult.”

Did your surgically repaired knee play any role in the mostly left, but also sometimes right, misses?

So we can expect the real Koepka to show up again on moving day, then?

“Yeah, obviously be off a little earlier, so probably no wind, shoot a low one and then we’ll see. We’ll see where Sunday ends up.”

Al Ain Equestrian, Shooting & Golf Club is next off the tee in our series designed to help you...