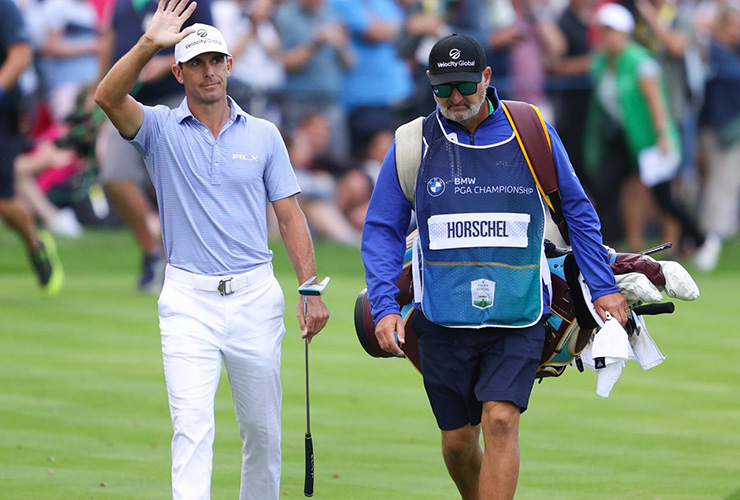 Richard Heathcote
Billy Horschel waves to the crowd during the third round of the BMW PGA Championship.

By John Huggan
VIRGINIA WATER, England—Fourth last week at the Italian Open, the unlikely figure of Francesco Laporta now has an opportunity to go three places better at the BMW PGA Championship. The 30-year-old Italian’s third-round 69 over the Burma Road course at Wentworth on Saturday has him 14 under par after 54 holes and one shot clear of local man Laurie Canter. Four men, including American Billy Horschel, are piled up in third, another shot behind the leader.

One of those completely unaffected by Ryder Cup qualifying distractions—he is ranked 254th in the world and is winless on the European Tour—Laporta’s lead could have been greater. Unlike most of his nearest challengers (Horschel a notable exception) the two-time winner on the Challenge Tour failed to birdie either of the par 5s that form the climax to a course that once looked like it was designed by Harry Colt. But he was happy enough, albeit he will be walking an unfamiliar line over the closing 18 holes.

“I played solid,” said Laporta. “I was just trying to be patient and focus shot-by-shot. That’s what I was thinking. I’m feeling relaxed. Last week was by far more pressure on me. But now I have my card for next year and I feel a lot more comfortable. Tomorrow will be tough, but I like to be under pressure. This is what we play for. I’m looking forward to tomorrow and seeing all the crowds.”

Canter—another non-winner on the European Tour—is emerging from a quiet spell that has seen him miss the cut in each of his last three events. But there was little sign of such mediocrity in his play during a steady third round of 70.

“I’m trying to enjoy this experience because I think you have to,” said the 31-year old Englishman. “It’s the best part of the job when you’re playing well. There’s a nice atmosphere out there too. I’m trying to take it all in, while remaining focused on what I have to do. I think I can win any week to be honest, so it’s just a question of going out and executing.”

Equally keen to record what would be his first victory in a “regular” European Tour event is Horschel. Currently fourth in the Race to Dubai standings—courtesy of his victory in the WGC Match Play and T-2 finish in the WGC Workday Championship at The Concession—the 34-year old Floridian was bursting with enthusiasm after signing for a third-round score of 69 highlighted by six birdies and scarred by three dropped shots.

“There are tournaments as pros that we want to win,” he said. “The Players, the majors, maybe a few others. But as an American, you don’t usually say a tournament on the European Tour. But to win the BMW PGA Championship would, for me, be equal to a Players Championship victory. When I first came over here two years ago, I fell in love with the golf course, which I knew I would. The fans have been great to me, too. The support has been great this year. So to get that victory tomorrow, if it happens, would be tremendous.”

Indeed, should Horschel prevail he would be the first nephew of Uncle Sam to win the biggest event on the European Tour. Victory would also go a long way towards him clinching the season-long Race to Dubai. Should he achieve that goal, he would be only the second man to win the FedEx Cup and the Old World equivalent.

“Knowing no American was won Race to Dubai, it would be cool to do that,” said Horschel. “Also, to say I was a Race to Dubai and FedEx Cup champion. Only one guy has won both, a big Swedish guy named Henrik Stenson. I would love to be able to do that.”

So would a few others. Game on.

Billy Horschel pulls off a stunning win at the BMW PGA, makes history in the process