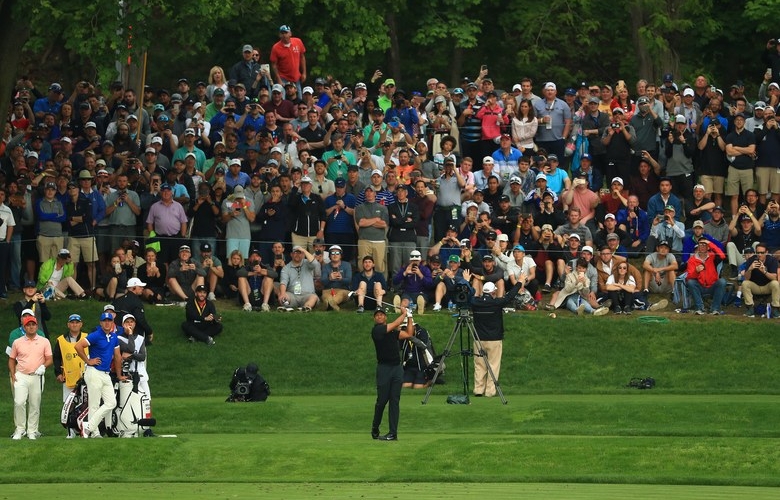 Woods plays a shot from the 17th tee during the second round of the 2019 PGA Championship at the Bethpage Black course on May 17, 2019 in Farmingdale, New York. (Photo by Mike Ehrmann/Getty Images)

By John Strege
Interest in Tiger Woods never really waned, though it might have taken a hiatus while he recovered from his spinal-fusion surgery. But now that he’s back and is a Masters champion again, it has resumed in full.

To help supply the demand, author Jeff Benedict, in partnership with Wheelhouse Entertainment, will develop film and television projects based on his intellectual property, the first of them “Tiger Woods,” drawing on content from the 2018 New York Times bestseller “Tiger Woods,” co-authored with Armen Keteyian.

“As a rabid sports fan,” Wheelhouse CEO Brent Montgomery said in a news release, “I had seen Jeff’s byline and read much of his work, always impressed by his insights and access into some pretty rarified worlds, but when I picked up ‘Tiger Woods’ I saw what a true force Jeff really is – and a compelling way to bring the Tiger Woods story to life as one of the most moving in sports history.”

“‘Tiger Woods’ will be the first project taken to market by Wheelhouse and Benedict as a scripted limited series,” the news release said. A spokesman said no other information is available yet, that it is still a project in development.

Benedict has written 15 books of non-fiction and is currently working on a biography of LeBron James.