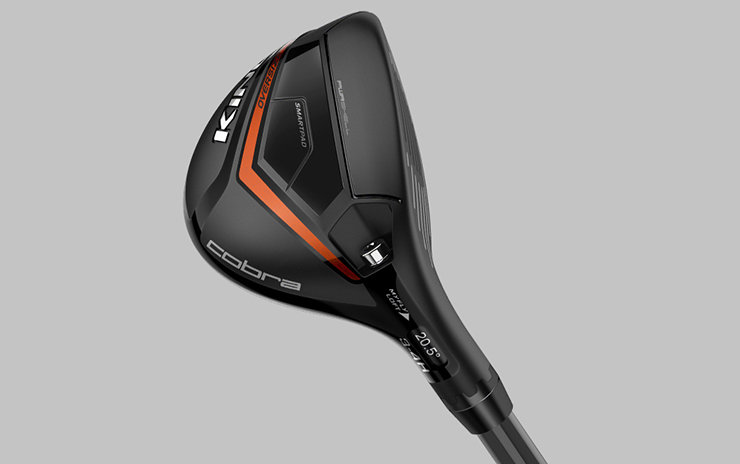 Making a club larger might naturally lead to the club being more forgiving on off-center hits—drivers are a natural case in point—but making a club larger that a player must hit off the ground presents particularly difficult challenges. Most notably, a larger body can raise the club’s center of gravity, producing shots that fly too low and spin too much. That can lead to less distance.

The Cobra King OS hybrid makes the forgiveness of its wider, large volume frame work as a playable club off the ground thanks to a lower CG. The lower CG comes about through the King OS hybrid’s multi-material construction. That includes a thin-ply carbon composite crown called TeXtreme that saves eight grams and internal tungsten weighting.

While the wide frame of the King OS hybrid provides more stability on off-center hits, the entire face’s flexibility is enhanced by extending the low portion of the face plate around the leading edge. This moves the weld line away from the face to the lower stress area of the sole, allowing a broader area of the face to flex more similarly to that of the center of the face. It’s a similar idea found in the company’s King OS irons.

“The oversized head will provide golfers with even more speed and distance on off-center contact without sacrificing forgiveness or control,” said Cobra’s Tom Olsavsky, vice president of R&D. “The key to distance is lower CG and less spin, which is a big challenge when you create a larger clubhead.”

Not lost in the midst of all this technology is the one simple benefit of the design: The oversized shape of the King OS hybrid breeds confidence. According to Cobra, the King OS is the largest hybrid the company has ever introduced.

The King OS hybrid also will be offered as a combo set with the King OS irons that includes two hybrids. The King OS hybrids will be available in stores June 2 (US$250) and the combo sets will arrive July 8 ($1,100 steel, $1,200 graphite).Editor’s note: Middle East prices and availability dates TBC.