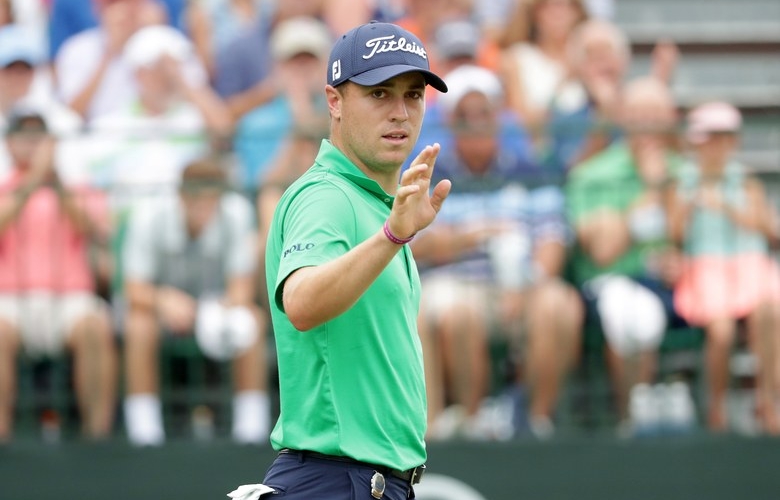 CHARLOTTE, NC – AUGUST 11: Justin Thomas of the United States reacts to his putt on the second hole during the second round of the 2017 PGA Championship at Quail Hollow Club on August 11, 2017 in Charlotte, North Carolina. (Photo by Streeter Lecka/Getty Images)

By E.Michael Johnson
Justin Thomas won the Dell Technologies Championship for his fifth win of the 2016-17 PGA Tour season and in the process became the frontrunner for player of the year.

Although Thomas displayed his usual prowess off the tee (307.8-yard average) and accuracy with his irons (70.83 percent greens in regulation), it was his work on the greens that proved useful at TPC Boston. Using a Scotty Cameron by Titleist Futura X5 mallet that he first put into play at last year’s Barclays, Thomas posted a 1.117 strokes gained/putting mark for the week and a 1.740 on Sunday.

In speaking with Thomas shortly after his win at the PGA Championship, Thomas recounted how he got the putter as a result of a visit to Scotty Cameron’s Studio.

“Anytime you go to the Studio and work with Scotty, you learn something new every time,” he said. “It’s an unbelievable experience. It’s really fun. You walk out of there with more knowledge than when you go in there. I feel like I leave having something good to work on with my putting and my mechanics. It’s not just looking at different putters. You’re looking at what putters are going to give you the best roll and bring out your best stroke, what’s the right weight. I was struggling a little bit with my stroke last year and I wanted to try something different. I just kind of picked that putter [the mallet-style Futura X5] up and it felt kinda good.

“This was a totally different look for me. I’ve used a Newport 2 style for basically my entire life. I had used a Cameron Fastback model during my year on the Web.com Tour for about 85 percent of the season but other than that it’s been a Newport 2, so it was a completely different look.”

And obviously, a pretty good look at that.